Rafael Payare will be in masterpiece mode for his inaugural season at the helm of the Orchestre symphonique de Montréal.

The Venezuelan conductor’s indoor opening act on Sept. 14 comprises Shostakovich’s Fifth, arguably the most popular of all post-Mahlerian symphonies; Ravel’s La Valse, a venerable OSM showpiece; and Pierre Mercure’s Kaléidoscope, a Canadian favourite since its premiere by the OSM in 1948.

The closing concerts in May and June feature Beethoven’s Ninth.

“I would not say anything against this,” the 41-year-old said Monday when it was put to him that a playlist including Brahms, Bruckner, Debussy and Sibelius reflects a fondness for great classics.

Montrealers are invited to expect more of the same. ‘The idea of the first season is to have a sneak peek at what we will be planning for the next five years,” Payare said. 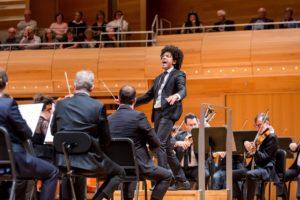 However solid in character, the 2021-22 season is relatively compact. The tally of 61 concerts in the Maison symphonique is up from the 26 of Covid-ravaged 2020-21 but still considerably short of the 100 or so typical of a pre-Covid OSM season.

The lingering pandemic has other effects. Evening concerts start at 7:30 p.m. rather than 8. Concerts through February are given without intermission and mostly without printed programs. As for the crowd count, present measures allow the sale of a maximum of 958 tickets in a facility that seats 2,100 in the absence of a choir.

“When we had to program the season, we didn’t know what the situation would be,” explained OSM director of music programming Marianne Perron.

Payare’s 19 mainstage concerts over seven weeks – a workload that will double in 2022-23 – leave room for 16 guest conductors, including a few who were perceived to be competitors for the music director position. London-based Vasily Petrenko and the Frenchman Lionel Bringuier are on the podium in October.
In January Juanjo Mena, a Spaniard, is responsible for the only music by Mahler: Kindertotenlieder with the Scottish mezzo-soprano Karen Cargill. Payare promises more Mahler in future seasons.

Fans of mature maestros have options. Former San Francisco Symphony music director Michael Tilson Thomas – recovering at the moment from surgery to remove a brain tumour – returns in March for a two-program, five-concert residency including Schubert’s Ninth Symphony, Tchaikovsky’s Second and his own Poems of Emily Dickinson, with the Canadian soprano Measha Brueggergosman as soloist. Thomas turns 77 on Dec. 21.

Another distinguished senior citizen is Zubin Mehta, 85, who conducts a Wagner program on Feb. 5 with the American soprano Christine Goerke. This concert marks the 60th anniversary of the OSM’s first international tour, which was led by Mehta, a former music director.

In November the American David Zinman, also 85, conducts a pair of concerts featuring Shostakovich’s Symphony No. 15. This is one of three 2021 programs offered – some weeks after the live performances – as $20 webcasts.

Curiously, Kent Nagano, who turns 70 on Nov. 22, is booked only for three Christmas concerts with the francophone family entertainer Fred Pellerin. Nagano, like Mehta, holds the title of OSM conductor emeritus.

Another December offering, this one involving the OSM chorus, is Berlioz’s L’enfance du Christ with the Frenchman Hervé Niquet on the podium. Easter occasions two April performances of Bach’s St. Matthew Passion as led by the British early-music specialist Paul McCreesh.

Pandemic notwithstanding, there is a balance of domestic and foreign soloists. Violinist Hilary Hahn and pianist Daniil Trifanov are among the notable imports.

Four new Canadian works will be heard, by Gabriel Thibaudeau, Dorothy Chang, Simon Bertrand and Ana Sokolović (who, like Tilson Thomas, is styled artist-in-residence). Thibaudeau’s contribution in April will be a new score for the 1923 silent film The Hunchback of Notre Dame, with an ensemble of OSM musicians sharing duties with OSM organist-in-residence Jean-Willy Kunz. 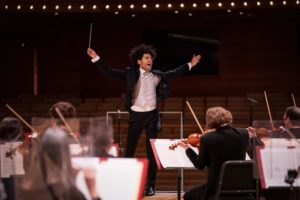 While making a good impression on audiences is surely foremost of Payare’s priorities, a music director has other responsibilities. Many vacancies in the orchestra need to be filled. There are six auditions in September alone.

“Personality,” Payare said when asked what he listens for. “The wow factor, which we know the OSM possesses.”

There are six chamber concerts in Bougie Hall, starting on Sept. 29 with a program involving Payare. The OSM Pop series, led by former OSM assistant conductor Dina Gilbert, comprises two programs and six concerts, all in 2022 and all involving rap groups. Children’s programming includes an event designed for children with autism spectrum disorder.

Subscription options include a package of concerts involving Payare and a “Shostakovich & Co.” bundle focusing on Russian music. Sale of subscriptions and webcasts begins Aug. 24. The box office for single tickets opens Sept. 7 at noon.