Six degrees of separation does not apply to either ethnic or musical communities. Last time I met with Carissa Klopoushak was nearly eight years ago when I interviewed her and her band mates from Tyt i Tam, a Ukrainian turbo-folk band established in 2003, which has recorded four albums and toured Canada, Ukraine and Australia. This time we met at one of her former haunts in Mile End while she worked on her doctorate in violin performance at McGill.

Over caffeine-infused drinks I asked Klopoushak about her formative years. “I started when I was about four years old. There was always plenty of music making in our household; not only the classic Suzuki violin upbringing, but also Ukrainian traditional music. Chamber music became part of my musical life during high school in Saskatoon, and both remain extremely close to my musical soul.”

Klopoushak now considers Ottawa home base after winning a position with the National Arts Centre Orchestra in 2014. “Making music with my colleagues is such a joy. They are all such invested artists” she said, “I always feel encouraged to keep my curious and versatile sides active and fulfilled.”

During the five years prior to joining the NACO, Klopoushak seemed to be constantly on the move. After winning the 2009 Eckhard-Gramatté National Music Competition, resulting in a tour, she was also busy as co-founder and artistic director of the Ritornello Festival in her hometown that very same year.

“With Ritornello, we understood that we wanted to nurture our community,” Klopoushak explained. “Saskatoon is a place many people leave, including talented musicians. We wanted to create something to bring people home for. Now, we not only bring artists from Saskatchewan home, but bring in wonderful established Canadian chamber groups as well.” Her enthusiasm surged when she added: “I am getting so excited about heading home for Ritornello this year, as it is our 11th season.” 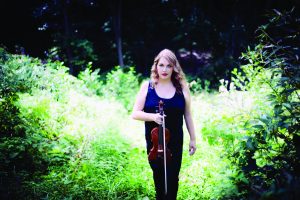 Building Personality While on the Go

Klopoushak is a laureate of the 2018 Canada Council for the Arts Instrument Bank Competition, for which she was awarded an 1851 Jean Baptiste Vuillaume violin, the Maggini model. This was not her first success in the program. In 2012 she won a three-year loan of an 1869 Vuillaume violin and bow.

“I have been fortunate to play these two Vuillaume violins. I work together with those who have been loaned these violins before me, and made their contribution. I am doing my best to make a contribution to the personality of the older Vuillaume, and am learning from it every day.”

Being Ukrainian, I understand the magnetic pull to cultural heritage, so I asked Klopoushak about her 2013 doctoral dissertation. “It allowed me to explore my Ukrainian culture a little deeper than the folk music that is so celebrated within our culture. This project allowed me to bridge two of my passions into an area where very little work had been done in English.. I examined repertoires for violin by Ukrainian composers Maxym Berezovskyj, Mykola Lysenko, Borys Lyatoshynskyj, Valentyn Silvestrov and Myroslav Skoryk as well as many others. It provided me with deeper insight as well as reason for further exploration into the classical world of my ethnic roots.”

Prior to accepting her current position with NACO, she spent months touring with the Australian Chamber Orchestra. Once settled, an interesting musical alchemy took place between Klopoushak and three other NACO members. 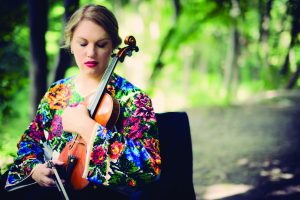 Together with violinist Jessica Linnebach, violist David Marks and cellist Julia MacLaine, Klopoushak established the Ironwood Quartet in 2014. “It all came out of our passion for chamber music,” she said with contagious enthusiasm. “It also works out very well that our schedules are pretty well set by the larger entity which we all enjoy being a part of. We are having so much fun exploring this repertoire together, including the music of Ana Sokolovic and Nicole Lizée, which we’re looking forward to performing at the Canadian Cultural Centre in Paris while on tour this spring with NACO.

“Ironwood will definitely be around and about once we get back home,” said Klopoushak. “There will be a residency in New Hampshire, then on July 14, we’ll be performing at the Indian River Festival on Prince Edward Island, and then it will be off to Prince Edward County, Ontario, July 26-28. Ironwood Quartet has taken over the artistic direction of the Classical Unbound Festival this year, and we are all very excited about the three-day program we have put together.”

Before we parted, Klopoushak reminded me of a project that means a great deal to her. “I was asked to co-write a ballet score for the Ukrainian Shumka Dancers’ Indigenous-Ukrainian collaborative production Ancestors & Elders, which had its world premiere in Edmonton April 2018. “I just loved that type of collaboration; I learned so much. I really want to do more in the way of mixing folk with classical.

“I am excited to rekindle such a project with Alexandru Sura, who plays cimbalom. I love to explore the social aspects of making music. I am open to trying new things and exploring, projects and more projects.”

Natasha Gauthier summed up Klopoushak’s artistry on artsfile.ca “She has a meaty, luscious sound, rhythmically driven, the raw honesty of her musicality tempered by a confident, light-handed virtuosity.”