“By the end, I could barely control my emotions,” says Thomas Yu, describing his first-prize-winning performance at the Cliburn International Amateur Piano Competition in Fort Worth, Texas, on June 25.

Yu, a Calgary periodontist, was one of six finalists who played a piano concerto movement with the Fort Worth Symphony under guest conductor Damon Gupton. He chose the third movement from Saint-Saëns’s Piano Concerto No. 5. “I had only six minutes to give the audience and jury my entire life,” he says. “It is difficult to get into that mindset and physicality in such a short time, especially with a third movement, so the key for me was to control my adrenaline. I felt better as the piece went on.”

His first prize consists of $2,000, and a pair of tickets and official guest status for the 15th Van Cliburn International Piano Competition in 2017. Yu is no stranger to the world of amateur piano competitions. He won CBC Music’s Piano Hero contest in 2015 just a couple of months after being named 2014 Honens ProAm Champion in Calgary. 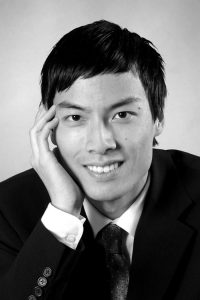 To reach the finals, Yu advanced from a field of 70 contestants through the quarter and semi-finals. Yu explains. “I think for me, the defining moment began early on with my selection of Regina composer David McIntyre’s Butterflies and Bobcats. Popular among Canadian pianists, it remained largely unknown to Americans. The people, jury and press adored it, which made my Saskatchewan roots tingle!”

“The atmosphere of an amateur piano competition is different from a professional one,” he says. “None of us has to win to launch our careers, so it is not so cut-throat. That said, the tension all week was higher than expected. Nothing can prepare you for the morning of a competition round. Being backstage was nerve-racking as well, but thankfully the Cliburn’s ‘stage moms’ are there to provide anything you need. The electric heating pad for your hands was a highlight amongst competitors!”

Yu was the youngest finalists, a fact that motivates him. “Michael Slavin, 65, was before me and his Beethoven Concerto No. 3 was sublime. Seeing how incredibly high the level of playing from older Cliburn competitors inspired me. I hope to keep playing like them all my life.”

He had extra incentive to play well this time: “Above all, I thought about my mother, who recently passed away. I dedicated every note of every round to her, and wished that she would be proud.”

What’s next for Yu? “I want to organize a masterclass setting in Calgary where amateur pianists can come to study, play and perform. It would be a great thing for Canada to be established as a centre for amateur pianist development.”

A longer version of this article appeared originally at www.cbcmusic.ca.