You are at:Home»Arts Industry»Jean-Sébastien Vallée: the future of choral singing in Canada

For several years now, Jean-Sébastien Vallée has been carving out an enviable place for himself in the world of choral singing. Appointed director of the renowned choir of the Church of St. Andrew & St. Paul in Montreal in 2015 and music director of the Ottawa Choral Society the following year, he also holds several positions at McGill University, where he is an associate professor of music, director of choral studies and coordinator of the Ensembles and Conducting Area at the Schulich School of Music.

He has also served as director of choral studies at California State University in Los Angeles and was on the choral faculty of the University of Redlands. His academic and professional experiences have taken him around the world and this year he was carefully selected to take on one of the most sought-after positions in his field: artistic director of the legendary Toronto Mendelssohn Choir.

“My first experience as a conductor happened when I was 16,” he says. The parish choir of Saint-Nicolas, where I grew up near Quebec City, needed a new director. I had never conducted before but since there were only eight singers I said yes and I immediately fell in love with the intimate relationship that is created when working with the singers. That was the first spark, that kind of vulnerability that comes from the human voice. Later, I discovered my passion for poetry, for the word, and I realized that the world of choral singing was the ideal environment for me.”

While he planned to pursue a career as an instrumentalist, having completed studies in piano and trumpet, it was meeting Canadian conductor Nicole Paiement in a masterclass that led him to want to study conducting.

“She made it clear that her passion was to be a full-fledged conductor and that she wanted to work in opera, symphonic music and choral music,” he says. That really resonated with me so I followed her to the University of California in Santa Cruz to do a master’s degree in conducting.”

Vallée then turned to the University of Illinois at Urbana-Champaign to further his studies more specifically in choral conducting and to learn about the North American approach to the field. The institution was the first to offer a doctoral program in choral music and remains one of the go-to places for young, ambitious and passionate choral conductors. After several years in the United States, Vallée finally settled in Montreal seven years ago, where he found both his Quebec roots and a strong Anglo-Saxon musical tradition.

“I left for the United States when I was 24 and after every chunk of five years I felt the need to change cities,” he says. Now, at 42, I feel great in Montreal. I found that returning to my French-Canadian roots and the opportunity to work in English at McGill presented the perfect situation for me to be myself and explore both my emotional and cultural heritage.”

Despite having a busy schedule with commitments across North America and Europe, pedagogy remains a key element in Vallée’s professional life. He has found the Schulich School of Music at McGill University to be an ideal place to share his passion and pass on his knowledge.

“In my opinion, McGill is the music school in Canada that supports and promotes choral singing in the best way. In a university like this, with a true conservatory approach, there are as many people doing research as there are instrumentalists and singers performing. Everything is put on the same level, including choral singing, with a lot of administrative and financial support. I think the program is
really exceptional.”

Eager to offer a broad overview of the profession to conducting students, he has drawn from his experience at the University of California at Santa Cruz and is proud to offer courses where the goal is to teach the art of conducting in all its forms rather than specializing, for example, in the orchestral repertoire.

“I think it reflects what is happening to all other musicians in the 21st century,” he says. It’s unthinkable for a singer or violinist, especially when they are still in school, to take on only one repertoire. To make a living today, you have to be very versatile and it should be the same with conductors. It is essential to have this kind of program at a university like McGill.” 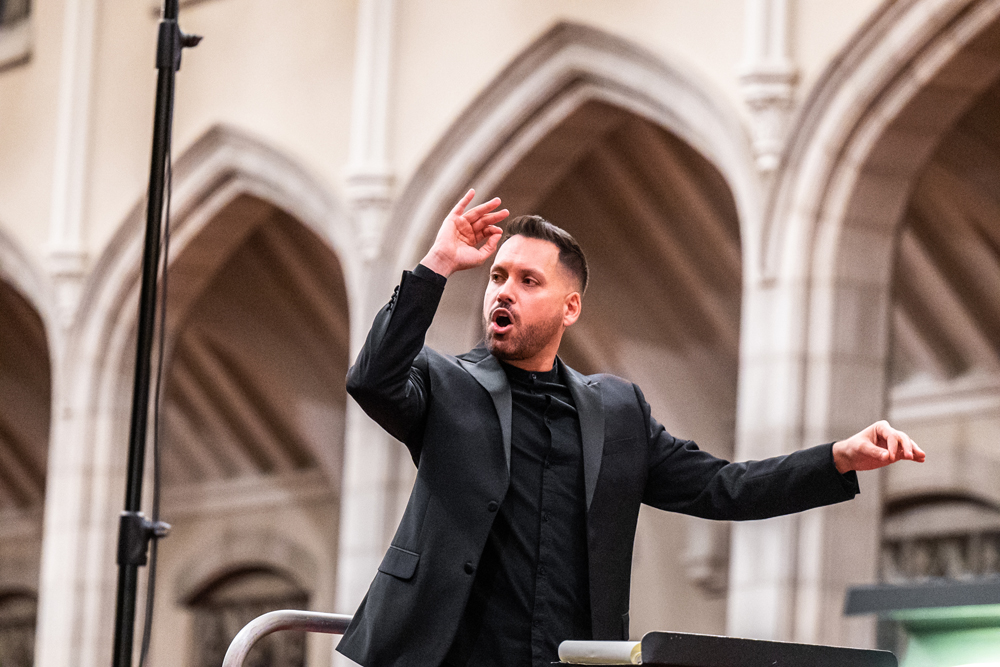 In May 2021, after two years of negotiations, Vallée was appointed the Toronto Mendelssohn Choir’s eighth artistic director. Founded in 1894 by Augustus Vogt, this ensemble, composed of a core of professional choristers as well as skilled and experienced amateurs, presents its own annual concert series, collaborates regularly with the Toronto Symphony Orchestra and has toured throughout the United States and Europe. The choir has performed at Carnegie Hall, Royal Albert Hall, the Kennedy Center in Washington, Vienna, Salzburg and Prague and remains one of Canada’s most respected musical institutions.

“It’s a big challenge for me because most of the conductors who have preceded me in this position have held it for long periods of time, on average 15 or 20 years,” he says. Just because the choir has 127 years of history doesn’t mean everything is in place and running smoothly. In a way, it’s benefited from a very healthy break because of the pandemic. It allows us to rethink how things work without being questioned too much. People are already so happy to come back to make and hear music that this particular situation has given me the flexibility to reinvent certain things.”

Taking the reins of an institution with so much history does present some significant challenges. The 2021-2022 season will feature a mixture of much-loved repertoire as well as works from the contemporary repertoire and world-premieres, with commissions from composers such as Barbara Assiginaak. At a time when cultural organizations are trying to reinvent themselves and find links between the past, the present and the future, while preserving the integrity of their activities, Vallée has a clear vision of what he wants to accomplish during his tenure in Toronto.

“The real challenge for an ensemble like this, which was one of the first large choirs in Canada and is still seen as a leader in our country because of its resources, history and influence, is that we have to lead the way for other ensembles, regardless of their size. We must also ask ourselves important questions about the state of choral singing today, its future, its value, its place in our society, how to move people with our voices, etc. The first reflex is often to simply program new music and put together new projects while ignoring the music of the past. I think a healthy approach can be to reconcile the two.”

The way the works are presented remains one of the most important elements for Vallée. He thinks it is outdated to believe that music contains everything in itself and that does not need to be explained to the public. Above all, he believes that it is more important than ever for it to be listened to, thought about and presented by people with a different vision from those who have traditionally been asked to share their thoughts on great music.

“Often the program notes are those of well-known musicologists and can be reused for several decades. This year, we decided to hire Rena Roussin, a Métis doctoral student in musicology at the University of Toronto, to write the program notes. Our first concert is Brahms’s Requiem and Dett’s Chariot Jubilee, both of which are well-known and well-loved by the public. We wanted to challenge ourselves to think about what more could be said about them. What can a young adult bring to the table that is different from all the program notes already written by a 65-year-old white man who is an expert in the field? The idea is not just to change the repertoire, it’s to change how it’s talked about and who talks about it.”

Forgetting about the past is not an option. Tradition remains an essential element of choral singing and, according to Vallée, it is a matter of finding a way to balance the different concerts of a season and to choose the works on the program so that they complement each other, regardless of their style, language or the period in which they were composed.

“It can be done through several concerts. You can present one of J.S. Bach’s Passions or a Messiah, which have been very much part of the great choral tradition for centuries now, and in the same month present another Passion such as David Lang’s Little Match Girl Passion, based on Hans Christian Andersen’s fairy tale, which is more secular. It’s important for me to try to find the equivalent of a Christian Passion in the modern world and present it side by side with these works to provide a more complete story for the audience. It’s a way of acknowledging the greatness and importance of the religious Passion in our field, but also of helping the audience realize that its key elements are also found in everyday life, even today. This allows us to have a more comprehensive season that speaks to everyone.”

This season, in addition to concerts with the Toronto Mendelssohn Choir, Vallée will conduct several performances with the Schulich Singers, the Ottawa Choral Society, and St. Andrew and St. Paul’s Church, where he is finishing his tenure this year after six years as director of the choir.

“I’m hoping to travel more. I have two winter sabbaticals from McGill awaiting for me in 2023 and 2024 and that will allow me to take on some projects outside of Quebec, specifically in Hungary and the United States. One of my goals is to focus more attention on the Toronto Mendelssohn Choir in Toronto and see how the ensemble can be a pioneer in choral music in Canada, especially thanks to its resources and its immense potential. I plan to work very hard to establish education programs, outreach programs, hire composers-in-residence and organize conducting symposia. These activities will serve to ensure that the Toronto Mendelssohn Choir not only remains a respected concert presenter in Toronto, but is also able to inspire and nurture the choral world across Canada.”

Full details on the Toronto Mendelssohn Choir’s season can be found at www.tmchoir.org.