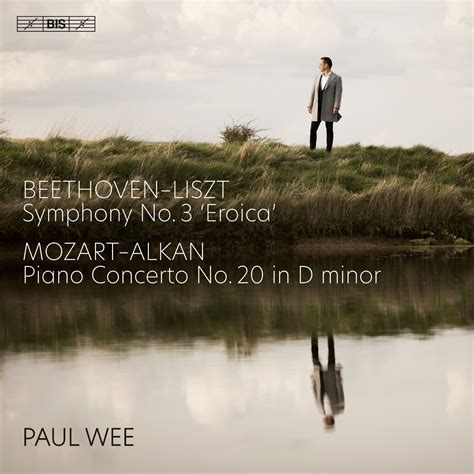 Franz Liszt did more to spread music appreciation than the entire education apparatus of his time. Hearing a piece he admired, Liszt would make a piano transcription. He got most applause for new Italian arias by Bellini and Donizetti but Liszt always had missionary zeal so he introduced complete symphonies by Beethoven to small towns where no professional orchestra ever played.

Paul Wee, a London lawyer with phenomenal keyboard technique, gives the Liszt/Beethoven Eroica score his all, and that may be a little too much. He plays fast and loud in the opening movement, achieving impact without much penetration, propulsion without that indefinable Schwung that a master-conductor brings to the score. Emotion kicks in through the funeral march but the account as a whole lacks irresistible coherence. The album is redeemed by a transcendent reading of a solo transcription of Mozart’s 20th piano concerto in D minor, K466, by the eccentric Parisian pianist-composer Charles-Valentin Alkan. It is, of course, much easier to simulate a small Mozart orchestra on solo piano than to project one of Beethoven’s big bangers, but Alkan does it with such finesse – and Wee plays with such empathy – that you could hardly imagine a better performance of the concerto with full orchestra. Alkan, with just two hands, somehow differentiates the piano line from the orchestral accompaniment, and Wee keeps the conversation going with unerring conviction. Make Mozart great again? Alkan does, in much the same way as Liszt did. The final pages of the Allegro take off like a flight of herons, lifting the heart and all within it.