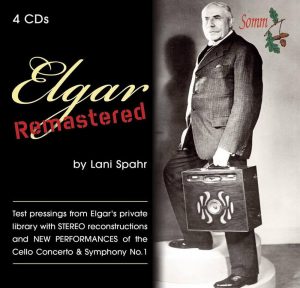 My instant reaction to this 4-CD box was that it’s strictly for audio buffs and English music devotees, whose lives will be infinitely enriched by rummaging through the disused takes of Sir Edward Elgar’s recordings of his own works between 1919 and his death in 1934. My second response, on reading Lani Spahr’s nerdish essay on the masters in Elgar’s private library is that only the golden-ears, acoustic-era brigade would get much out of this. How wrong I was.

Before I describe the contents of the box, it’s important to know that Elgar dried up as a composer after the end of the First World War and the overwhelming valediction in his cello concerto. The last decade and a half of his musical life was focused on leaving a legacy. No composer before him had trained his ears so intently on making recordings, conducting an authoritative interpretation. When Elgar marked a test-pressing with D for Destroy, H30 (hold for a month), HI (hold indefinitely), R (reject) or M for Master, he was making decisions that would preserve his music as he wanted it performed – or so he imagined. But the survival of additional takes in the collection of the American Elgarian Arthur Reynolds, restored here by the dedicated Spahr, confirms that the composer was often in two minds about how he wanted the music to go and we need to be aware of the alternatives.

Beyond this procedural information, comes the discovery that EMI, terrified that one microphone might fail and the legacy would be forever lost, used two mikes and sometimes three, as well as extra recording machines at Abbey Road. Put together side by side, these original Elgar pressings now present some of his work in a kind of simulated stereo.

Tempted? You should be. I was moved almost to tears by hearing a two-eared take of the first recording of the cello concerto with Beatrice Harrison as soloist, emotionally more reserved than modern performers and consequently more powerful at peak moments. The alternative takes are no less compelling and Harrison repeats the adagio in a cello-piano version, accompanied by a member of the royal family, HRH Princess Victoria. Oh, yes, this is epic stuff.

The two symphonies are little short of revelatory and the violin concerto, with the Menuhin boy, sounds almost unfamiliar. There is much else that I haven’t the space here to discuss; it will keep me warm through the winter. The set closes with Elgar conducting his deft and remarkably unpompous, unobsequious arrangement of God Save the King. I rose to my feet and listened, head bowed.