You may recognise the composer’s name as one of two brothers who assisted Deryck Cooke and Berthold Goldschmidt in creating the first performing edition of Mahler’s tenth symphony. Now 76, David Matthews has come a long way from those early Gustavian speculations. Where his brother Colin drew close to Benjamin Britten, David veered to the wilder fantasies of Michael Tippett while staying close to English roots and traditions. 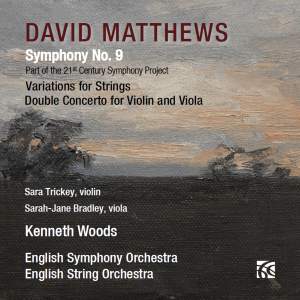 His ninth symphony, receiving its world premiere on this release, is a kind of summation. Starting with a self-composed carol and extending to a Bach chorale, it represents the best of British creativity in its craftsmanship, its moderation and its lucid rationale. The language, while tonal, is two generations beyond Vaughan Williams and the narrative reflects something of a thinking man’s struggle to maintain a reasoned equilibrium in a threatened universe.

A violin solo in the third movement recalls The Lark Ascending, if only in its distant unattainability. Something of the late symphonies of Malcolm Arnold rises elliptically in the finale. This is a lovely symphony, an altogether personal utterance by a composer who lives and breathes symphonic form, who writes out of love for each and every instrument of the orchestra. Kenneth Woods conducts the sweet serenity that is the English Symphony Orchestra. The five movements are over all too soon in 26 minutes.

A set of variations for string orchestra and a double concerto for violin and viola round off the album. I am saving them for the weekend. This is music to hold close and to savour at leisure.