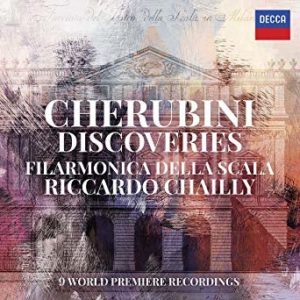 In 1824, while waiting for the the ninth symphony it commissioned from Beethoven, the Philharmonic Society of London ordered a backup symphony in D major from the Italian-turned-French composer Luigi Cherubini. The Society had been founded ten years earlier to perform music by ‘the greatest masters’, notably Beethoven, Cherubini and Carl Maria von Weber.

Cherubini did his best to sound great by imitating everything Beethoven did around the time of his first and second symphonies. Trouble is, Beethoven moved ahead in giant strides while Cherubini got stuck. The D major symphony has big gestures and a few half-tunes, but nothing nutritious for the audience mind that Beethoven was awakening.

Cherubini conducted the symphony himself in London but once Beethoven’s commissioned score arrived, Cherubini’s became no more than an occasional attraction. Some consider this unfair: Beethoven himself respected Luigi as his nearest rival and may have borrowed a few slick tricks from his kitbag.

Toscanini was a fierce advocate of the D major symphony and you can find quite a few recordings of the work, though none as cleanly played as this album from Ricccardo Chailly and the Philharmonica of La Scala. Crisp tempi, knife-edge entries, this is as good as Cherubini will ever sound on record.

The title ‘discoveries’ applies to eight marches by Cherubini that have not been recorded before. They are jolly little jinks in bite-sized form. Aired at low volume, they will be perfect for morning slots on Classic FM, BBC Radio 3 and the dentist’s waiting room.