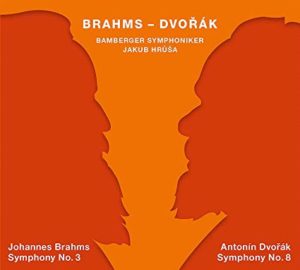 The Bamberg Symphony was formed in 1946 by ethnic Germans expelled by the Czechs in retribution for the Nazi occupation. Based in Bavaria, it acquired a sound that was markedly different from the nearby Munich orchestras, let alone others in the state.

Joseph Keilberth conducted the group with distinction for 20 years followed by Horst Stein. Since the turn of the century, the sound lost something of its edge under the British conductor Jonathan Nott.

Now, in bedrock repertoire, it is reassuring to find that the Czech conductor Jakob Hrusa has restored something of the original sonority, allowing the brass to go slightly sour without going out of tune and the strings to sound a little more laidback.

This is a fine band, returning to its best.

The Brahms, gloriously bucolic though it is, feels like it could have done with an extra half-hour out in the summer sun. Hrusa will have more to say about it in years to come. The Dvorak, however, is among the most exhilarating on record, fizzing with energy, surprises and life’s pleasures. The recordings come live from Bamberg’s Konzerthalle, which is superior in every imaginable respect from anything that Munich can offer. This is a fine band, returning to its best.