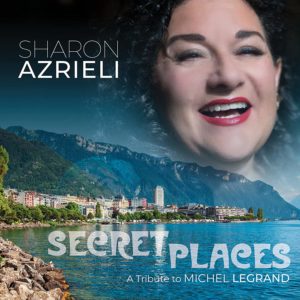 A tribute album to Oscar-winning film composer Michel Legrand, “Secret Places” is a whimsical, romantic journey which is given the ultimate treatment by two seasoned and endlessly creative jazz artists – Sharon Azrieli alongside arranger and renowned Israeli-American jazz pianist Tamir Hendelman. Listen to the album here.

The music of French composer Michel Legrand (1932-2019) ushers one back into the heyday of film. Instantly recognizable lush strings and playful brass greet the listener’s ear at every turn.

“Secret Places” focuses on Legrand’s songbook, which is equally at home onscreen and in a jazz club. Azrieli’s tour will surely be a special opportunity to hear Legrand’s music live and in some of the best jazz clubs in Canada and the United States.

Azrieli, Hendelman and band can be seen and heard performing this March at the following notable venues: