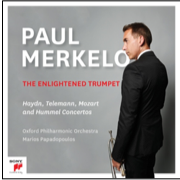 For Immediate Release, September 6, 2019 … Recognized among the finest trumpet virtuosos of his generation, Paul Merkelo releases The Enlightened Trumpet, his first recording for Sony Classical. Hailed as “a spectacular soloist … a most impressive master of his instrument” (Montreal Gazette) who “knows no limits” (Der Spiegel) and with “unusual lyrical gifts” (Gramophone), Merkelo has been Principal trumpet with the Orchestre symphonique de Montréal since 1995, and has appeared as soloist with prestigious orchestras around the globe, from Melbourne to Shanghai. In The Enlightened Trumpet, Merkelo is joined by the Oxford Philharmonic Orchestra and its founder and conductor Marios Papadopoulos for four spectacular concertos by Haydn, Leopold Mozart, Telemann, and Hummel.

The Enlightened Trumpet is available today on all digital platforms.

CD copies will be available September 18.

VIDEO: The Enlightened Trumpet – Behind the Scenes

All of the music on this new recording was written during The Age of Enlightenment, roughly 1688 – 1815, during which time the musical soundscape metamorphosed from the elegant formality of Vivaldi to the torrid turbulence of Beethoven. The trumpet passed through its own enlightened development, as changing musical styles and mechanical invention combined to ease the transition from its limited natural state to a pioneering form of the chromatic instrument we know today. Merkelo plays three different instruments on this recording: a piccolo trumpet for concertos by L. Mozart and Telemann; a custom-made E-major trumpet for the Hummel concerto; and an E-flat trumpet for Haydn.

Georg Philipp Telemann’s magnificent Concerto in D major for Trumpet and Strings represents the zenith of baroque trumpet writing, with displays of florid virtuosity. Some forty years later, Leopold Mozart – father of the more famous composer – wrote his Concerto in D major for Trumpet, 2 Horns and Strings. The charm and elegance of this work is both a nostalgic backward glance to the fast-fading glories of the baroque era, and a forward-looking embrace of the new classical age. Another thirty years later, the emergence of a chromatic trumpet was harnessed by Franz Joseph Haydn to produce his timeless masterpiece, the Concerto in Eb Major for Trumpet and Orchestra. This jewel of a concerto met the new classical demand for overt emotion without abandoning the trumpet’s heroic heritage. Haydn’s work was consolidated in the early nineteenth century by Johann Nepomuk Hummel, whose Concerto in E major for Trumpet and Orchestra combines heroic panache, tender lyricism, and sheer unbridled virtuosity.

Merkelo first heard these recordings as performed by the great Russian virtuoso Timofei Dokshizer, who was originally from Ukraine, as was Merkelo’s family. “His playing was unique as it sounded very often like the human voice, with colour change and vibrato, he was innately expressive, “ comments Merkelo, who decided to record Dokshizer’s notoriously-difficult cadenza in the third movement of the Hummel concerto as an hommage. On recording these early works with Papadopoulos and the Oxford Philharmonic, Merkelo says, “I love the part of Baroque and Classical music that can actually swing rhythmically … It has a certain sensibility and feel in the phrasing that has to happen organically. These trumpet concertos are really fun and swinging!”

This fall, after a tour to South America with the Orchestre symphonique de Montréal, Merkelo returns for engagements in Charlottetown, Chicago, Montreal, and Quebec City. On November 14th, he performs The Enlightened Trumpet with the Oxford Philharmonic and Papadopoulos at the  Sheldonian Theatre in Oxford. 2020 brings a recital tour of Eastern Canada and concerts in Georgia and North Carolina, before returning to Carnegie Hall with the OSM on March 24/25. In April, Merkelo makes his London solo debut at Cadogan Hall with the English Chamber Orchestra under Adrien Perruchon. For full performances dates, please see: paulmerkelotrumpet.com/calendar

An additional release on SONY Classical is planned for the fall of 2020, featuring trumpet concertos by Weinberg, Arutiunian, and a new arrangement of the Shostakovich Concerto No. 1 for Trumpet, Piano and String Orchestra, Op. 35, with the Russian National Orchestra under the baton of Hans Graf. 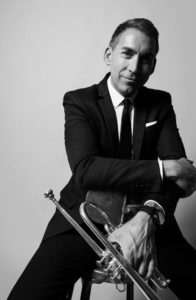 PAUL MERKELO made his New York debut in 1998 at Lincoln Center with the New World Symphony Orchestra and Michael Tilson Thomas. He has worked with conductors such as Leonard Bernstein, Charles Dutoit, Lorin Maazel, Sir Georg Solti, Zubin Mehta and Valery Gergiev, and has been invited as guest principal trumpet for the Pittsburgh Symphony Orchestra and the New York Philharmonic. As a soloist, Merkelo has been featured with the English Chamber Orchestra, Russian National Orchestra, Sapporo Symphony Orchestra, and Venice Baroque Orchestra, among others. Merkelo’s most recent recording was the JUNO-nominated French Trumpet Concertos with OSM and Kent Nagano. His first solo recording, A Simple Song, was ranked #1 in Quebec’s classical recording chart in 2000, and, in 2004, Analekta released the highly praised Baroque Transcriptions, which was nominated by ADISQ for Best Classical Album of the Year. Paul is on the faculty at the Music Academy of the West in Santa Barbara, and McGill University in Montreal. He is the founder of the Paul Merkelo Scholarship, which helps young, gifted brass players with financial aid and career guidance. Paul Merkelo is a Yamaha artist.