Toronto, August 11, 2022 – The Royal Canadian Mint is honouring one of the greatest musicians the world has ever seen by issuing a new $1 commemorative circulation celebrating the life and artistic legacy of Canada’s own Oscar Peterson.  Called “the man with four hands” by jazz great and admirer Louis Armstrong, Oscar Peterson rose to the top of the music world through more than six decades of electrifying piano performances and unforgettable compositions such as Hymn to Freedom, Blues Etude and The Canadiana Suite.  The coin was unveiled today before family and friends gathered in Toronto’s Roy Thompson Hall, a stage well known to Mr. Peterson.  It will begin circulating on August 15, to coincide with his birthday.

“The Mint is passionate about celebrating stories of exceptional Canadians on its coins and I am delighted that Oscar Peterson, the first Canadian musician to appear on a circulation coin, is being celebrated as one of the world’s most respected and influential jazz artists of all time,” said Marie Lemay, President and CEO of the Royal Canadian Mint. “Mr. Peterson’s music and legendary performances have brought joy to millions of music lovers in Canada and around the world and we are proud to honour him, through this coin, for his exceptional contributions to Canadian music and culture.”

The Oscar Peterson commemorative circulation coin was designed by artist Valentine De Landro, an accomplished comic book artist, illustrator, and designer from Ajax, Ontario. His design features Oscar Peterson at the piano, with his hands in full motion, from which emerges a flowing musical scale showing two closing bars of his famous Hymn to Freedom.  Mr. Peterson’s name completes the design.

“Throughout Oscar’s career he received many awards and honours, each of which meant a great deal to him. During the nearly fifteen years since his passing, there have been more. All of them humbling. All of them a source of pride. The addition of this commemorative circulation coin bearing his likeness is something neither he nor I could ever have imagined,” said Kelly Peterson. “Knowing that Canadians now, and for generations to come, will hold this coin and be reminded of Oscar Peterson or be inspired to learn about him for the first time evokes emotions challenging to describe. I am deeply, profoundly honoured. Oscar was a great pianist and composer. He was a staunch advocate for human rights. Above all, he was always a proud Canadian. As his music is timeless, so too now will he be a part of the Canadian consciousness forever.” 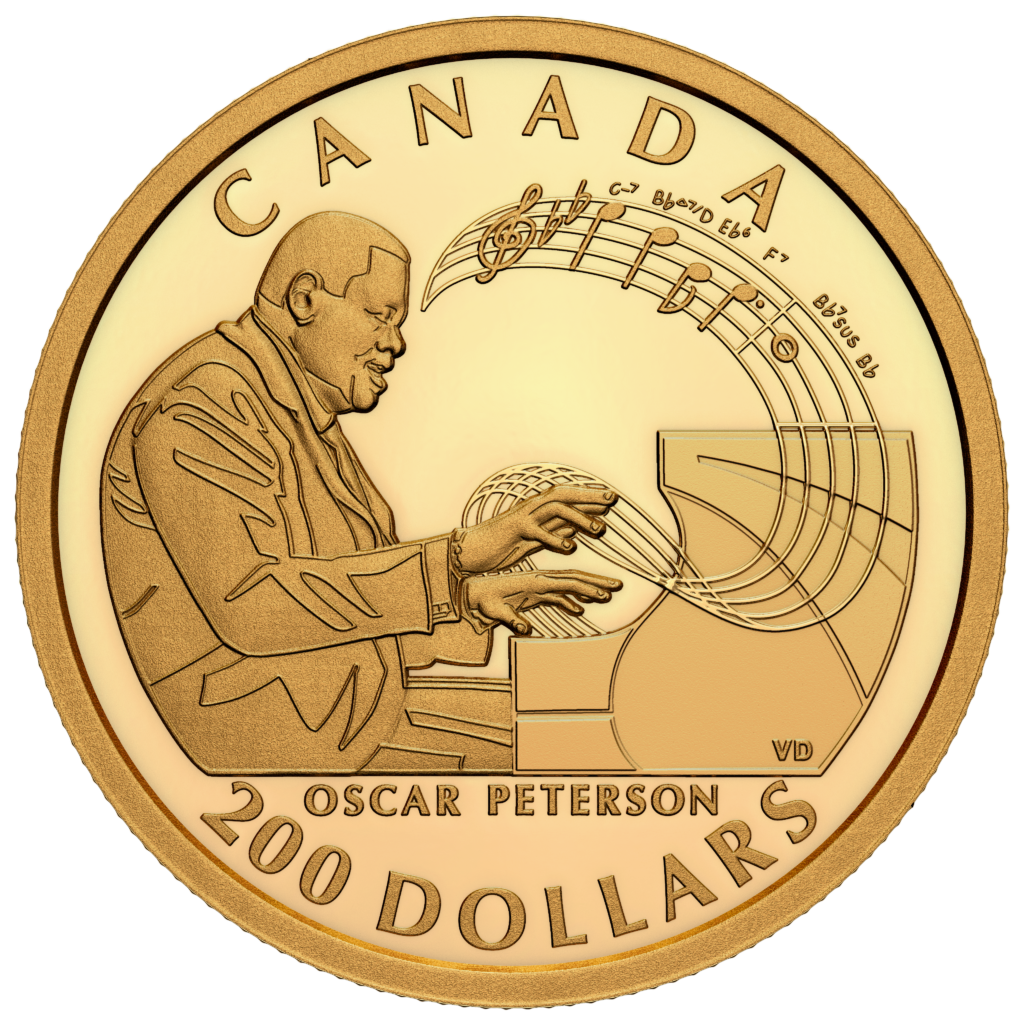 Growing up in Little Burgundy, the neighbourhood that was the hub of Montreal’s black community, Oscar Peterson was taught, by his father and his older sister Daisy, the value of a music education from a very early age.  Raised on the classics, he quickly mastered the piano and honed his craft through popular music to become one of the most acclaimed jazz musicians of all time.  Over a more than 60-year career, he made over 400 recordings and his famous Oscar Peterson Trio performed around the world.  He won eight Grammy Awards and was inducted in Canada’s Music Hall of Fame in 1978. A first-time Juno Awards nominee in 1977, he won Best Jazz Album, as The Oscar Peterson Four, in 1987. He was also made a Companion of the Order of Canada by the late Ramon Hnatyshyn, Governor General of Canada.

In 1962, he composed Hymn to Freedom, which became an anthem of the 1960s civil rights movement whose musical and social influence continues to resonate today.  His Canadiana Suite was an epic and moving tribute to the country he loved and always called home.

The impact of Oscar Peterson’s work and life story transcends generations: inspiring countless artists who themselves became music icons, and still attracting new generations to his music and to his craft. Numerous music schools and scholarships have been founded in his honour. Mr. Peterson died in 2007 at the age of 82.

“When I was a child traveling the world with my dad, I remember being curious about the figures on each country’s currency. It was an opportunity to learn about the history of where I was visiting. One thing that has always been important to me is that as Canadians, we take the time to explore our history – all aspects of it,” said Céline Peterson.  “Knowing that Canadians at home and anyone who visits from abroad will hold the opportunity to learn about a formidable figure in our nation’s history in the palm of their hand, brings me an immense amount of joy. My dad being given this recognition by the Royal Canadian Mint is something I never would have even thought to imagine because to me, he is and always will be, dad.”

The Oscar Peterson circulation coin is limited to a mintage of three million coins, of which two million feature a purple accent, Oscar Peterson’s favourite colour. It will reach Canadians through their change as bank branches and businesses replenish their inventories of $1 circulation coins.

The coloured and uncoloured circulation coin can be purchased together as part of a six-piece Collector Keepsake coin set. They are packaged in a richly illustrated collector card that contains one of each currently circulating coin, from five cents to two dollars. Other collector products adding to the celebration of Oscar Peterson’s legacy include special wrap rolls of 25 one-dollar circulation coins, in coloured and uncoloured versions, as well as 1 oz. fine silver and pure gold versions of the circulation coin design.

These collectibles can be ordered as of today by contacting the Mint at 1-800-267-1871 in Canada, 1-800-268-6468 in the US, or online at www.mint.ca/oscarpeterson.  They are also available at the Royal Canadian Mint’s Ottawa and Winnipeg boutiques, as well as through the Mint’s global network of dealers and distributors, including participating Canada Post outlets.

About the Royal Canadian Mint

The Royal Canadian Mint is the Crown corporation responsible for the minting and distribution of Canada’s circulation coins. The Mint is recognized as one of the largest and most versatile mints in the world, offering a wide range of specialized, high quality coinage products and related services on an international scale. For more information on the Mint, its products and services, visit www.mint.ca. Follow the Mint on Twitter, Facebook and Instagram.