You are at:Home»Classical Music»Chamber Music»Eclectic, Eccentric, and Essential Sounds of Revolution, from Shostakovich to The Beatles to Frank Zappa
Advertisement / Publicité

September 14, 2017, Montreal, QC – The MCO, under its Artistic Director Boris Brott, opens its 78th season with Revolution, an eclectic evening of music from the 60s and 70s, including Shostakovich, The Beatles, and Frank Zappa, in conjunction with the Montreal Museum of Fine Art’s boisterous current exhibition, “You Say You Want a Revolution.” The MCO performs a new work based on songs from the iconic Beatles album Sgt. Pepper’s Lonely Hearts Club Band, in newly-minted arrangements by François Vallières. Infamous Canadian fiddler Ashley Maclsaac will then join the MCO to transport the public into his eccentric sonorities. Also featured is Shostakovich’s profound Chamber Symphony, and Zomby Woof, Frank Zappa’s horror movie-inspired obsessive mix of heavy metal, jazz, and 1970s electronica, in an arrangement by Walter Boudreau. Boris Brott conducts the MCO for the colourful, visually-enhanced performance on Wednesday, September 27 at 7:30 pm at Salle Bourgie.

The Beatles’ Sgt. Pepper’s Lonely Hearts Club Band revolutionized the pop music industry and inspired a generation. François Vallières’ new arrangement celebrates the album’s experimental innovations and already-complex instrumentation. The catchy and psychedelic songs take us on a journey back to 1967’s “Summer of Love.”

Frank Zappa defied categorization. Influenced by the rhythmical aspects of early 20th-century music, especially that of Varèse and Stavinsky, Zappa tackled all genres and styles, including rock, reggae, heavy metal, ska, jazz, and contemporary music. The funk-colored Zomby Woof, from Zappa’s 1973 Mothers of Invention’s album “Over-Nite Sensation” is heard in an orchestral arrangement by Walter Boudreau.

Violinist Rudolph Barshai of the Borodin Quartet and founder of the Moscow Chamber Orchestra, obtained the blessing of Dmitri Shostakovich to arrange his String Quartet No. 8 (Opus 110) into a chamber symphony (Opus 110a). One of Shostakovich’s most consciously autobiographical and profound works, the Chamber Symphony draws upon numerous influences, from Jewish folk song to a gypsy-influenced waltz to the violence and agony of wartime. 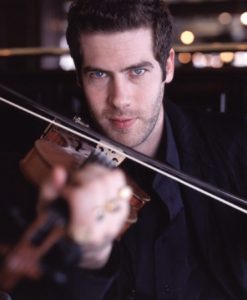 One of the most celebrated Canadian roots musicians of all time, Ashley MacIsaac has garnered international acclaim by playing the fiddle in that hard-nosed, traditional Cape-Breton style, while mixing genres and updating Celtic music to appeal to a broader spectrum of fans. Considered something of a local legend and prodigy by the time of his impressive 1992 debut Close To The Floor, Ashley broke through to the mainstream with the double-platinum genre-bending Hi, How Are You Today? in 1995. International radio play for the single, “Sleepy Maggie,” and a regular slot on MuchMusic made Ashley an instant Canadian icon. His newest project is FDLER, a mix of dance, electronic, and Celtic pop, with drummer/DJ Jay Andrews.

Celebrating 78 years of professional chamber music, the MCO (McGill Chamber Orchestra) is one of Canada’s most renowned chamber groups. Since 2000, the MCO is under the Artistic Direction of conductor Boris Brott, Doctor of Music honoris causa. The orchestra is a vibrant ensemble consisting of the best professional musicians and presents concerts throughout the year in the finest halls of Montreal.