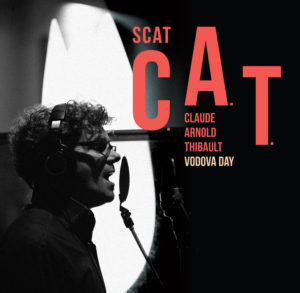 If a record cover telegraphs its content, this is the one. Behind the Scat C.A.T. stage name is one Claude Arnold Thibault, a jazzer at heart.

Full marks to him for his flawless diction; you don’t miss a word. Next, he has recruited quite a team of sidemen, several being his own siblings, and a few established citizens of our community, pianists Felix Stüssi and John Sadoway, bassist Frédéric Alarie, and hornmen André Leroux and Ron Di Lauro making cameo solo appearances. Twelve jazz evergreens are heard in this hour-long album, the likes of Just Friends, Love for Sale, April in Paris, Stella by Starlight—even two Charlie Parker lines, Donna Lee and Sippin’ at Bells, sung in pure scat manner. To his credit, he leaves plenty of solos to his sidemen—the pianists in particular; he himself scats out choruses of his own, but not on all numbers. Also pleasant are the sassy arrangements that echo the styles of the 1950s and 1960s, all played with gusto. That said, the very device of scat singing is a matter of taste; you either go for it or not.

But for all of its qualities, listening to this album is like visiting an art museum—and as the filmmaker Éric Rohmer once pointedly opined, museums are places where you can learn about things that aren’t done anymore. A perfect act for the Montreal jazz fest next summer. Wanna bet?