For decades, Canada’s contribution to the international jazz scene was limited to four names: Oscar Peterson, Paul Bley, Maynard Ferguson and Kenny Wheeler. All but one of them attained stardom by heading south to New York and earning their brownie points there before conquering the rest of the world.

The odd man out here is Wheeler; unlike his compatriots, he crossed the Big Pond and landed in London in the early 1950s, where his reputation grew and extended to the neighbouring continent. This situation remained unchanged till the 1990s, which doesn’t preclude the fact that others did try, but none ever made it to the level of that foursome.

But times have changed, and for the better. Think of pianists Renee Rosnes and Andy Milne, tenorman Seamus Blake, trumpeter Ingrid Jensen, composer-bandleader Darcy James Argue, not to forget the diva Diana Krall, and those names prove the point that Canada’s input to the jazz world is no longer a drop in the bucket. And the list keeps growing, with new talents, both male and female, striking out as never before. Though jazz is a male bastion of sorts, more women are now asserting themselves, not just as singers or pianists, but as wind players, too. Here are three good examples, all of whom happen to be trumpeters.

A window of opportunity opened for Rachel Therrien in 2015 when she netted first prize at the Montreal Jazz Fest’s annual competition. At that time, she was eyeing the Big Apple and that win was all she needed to make her move. Six years later, she has settled back in the jazz capital after a trying 17-month hiatus in Montreal, escaping the first wave of the pandemic by crossing the border only days before the shutdown.

For Therrien, New York is not so much an ends in itself, but more a tool or a means for advancing her career. As she puts it: “There is no doubt that the concentration of musicians is so great there that so many scenes can be maintained at the same time. I for one am both interested in jazz and Latin music, and there is never a shortage of gigs in either of those areas.”

From one musical encounter to the next, she met up with a Spanish bass player, Dario Guibert, in town pursuing musical studies, who then brought her along for a tour in his country, her first European gambit. In 2018, she was invited to play at a showcase in Juan-les-Pins in southern France, which led to her participating at its prestigious festival the following summer. A festival producer in Paris took note and encouraged her to get a group together and write music for it. No sooner said than done, she formed a quartet, a record label was found and in early 2020, the album saw the light of day (see reference below). Earlier this month, on Oct. 2, she guested at the Off Jazz Festival, albeit with a local rhythm section in tow.

While the past year and a half has weighed heavily on her, there was still a silver lining to it in that it afforded her a much-needed break after being away in all but two of the previous 12 months. Not one to stay idle for long, she kept herself busy during the past year and a half by writing more music, this time for a project she only now feels ready to do, a Latin band. As a sideline she has acted as a session producer for other artists, two of them to date. Now back in New York, she is itching to play again, and the opportunities are there for combos, but orchestras will be joining the fray soon, as she says, and looks forward to taking her chair again in the one led by trumpeter Arturo O’Farrill.

A native Calgarian, Stephanie Richards made her way to New York in 2008, after completing her studies at McGill then at Cal Arts in LA. After feeling her way around the piano in her youth, then beating the drum in a marching band, she picked up the trumpet in high school. The instrument spoke to her because of its flexibility and sonic possibilities. Like many trumpeters, she also uses a fluegelhorn, and digs its mellow sound very much, comparing it to something like “butterscotch.” 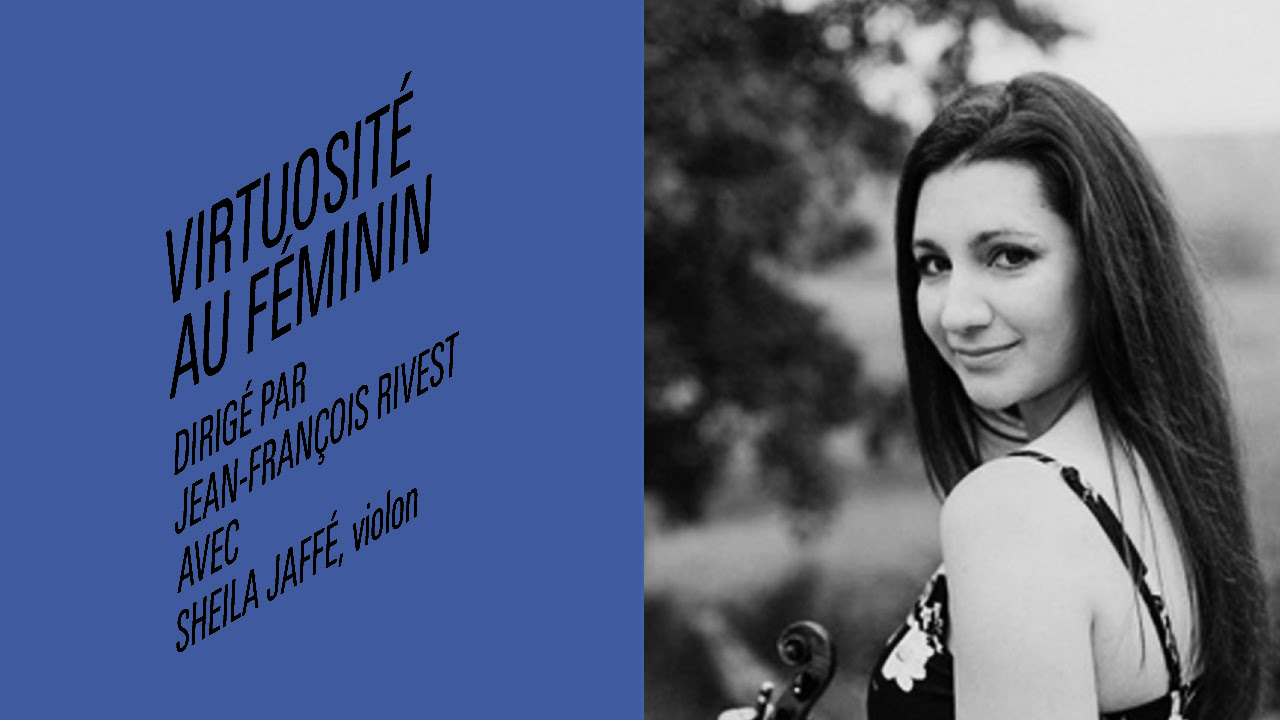 Richards’ musical path has been a very diverse one, ranging from popular to more sophisticated styles, be they jazz, classical, contemporary or experimental. Nowadays, her focus is mainly on the creative side of things, with a strong commitment towards exploiting the sonics of her instrument, through various mutes or by various valve effects.

In 2012, she joined the board of FONT (Festival of New Trumpet, an annual event founded by Dave Douglas), acting as its vice-president and event curator. Two years later, she settled in California to take up a teaching post at the University of California San Diego (UCSD).

With regards to the trying times borne out from the pandemic, she has held her own pretty well, her teaching duties providing a degree of stability sorely lacking to those not in her situation. But doing online video hookups with students was not exactly a satisfying alternative to classroom learning. Not having that immediate contact with them, and other performers at that, was anything but ideal, she admits, more so in a genre of music that depends so much on immediate interaction from its participants, especially when improvisation lies at its core.

On the upside of those downsides, one event had a profound effect on her: the birth of her first child, a daughter, just months before the outbreak. This new arrival definitely gave her reason to stay close to home, but it also had a bearing on her most recent album, recorded while she was still pregnant. (See reference below.) Interestingly, this was a duo with a piano player (Joshua White, who, she contends, is one of the best kept secrets of the West Coast). For her this record “expresses the idea of breathing one breath for two bodies, moving through the world with two distinct pulses happening at the same time.”

Twenty years after leaving her native Edmonton for Toronto, Lina Allemano was on the move again in 2013. Rather than heading south to New York, her destination was Berlin, and for a specific reason: to meet and work with one of the trailblazing trumpeters of our time, Axel Doerner. Three years and several visits later, she took the plunge, so to speak, while not giving up on Hogtown completely. In fact, she hastily retreated to it for the last year and a half to wait out the dire times. Now back in the German capital, things are definitely looking better for her. 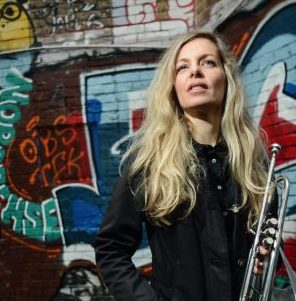 With dual training in classical music and jazz, this trumpeter steadily expanded her horizons within Toronto’s multifaceted music scene. In 2005, she put together her first steady band, a foursome bearing her name, which remains active. Beyond her musical abilities, she is quite savvy when it comes to business dealings, as witnessed by her successes in booking recurring tours for her band in Europe. Yet another facet of her work is the label she manages, LUMO Records, for which she has issued six titles to date, the latest released last March. (see reference below).

But Allemano has more aces in her deck than that one group. To satisfy her eclectic interests, she has put together a trio called Titanium Riot, a unit with drums and synthesizer that plays a kind of energetic improvised pseudo-psychedelia (according to her website). In a somewhat similar vein is the electroacoustic duo Bloop with a live electronics computer player. Equally daring is her solo trumpet project, documented on another of her recent discs, Glimmer, Glammer, from 2020. Last but not least is her first Euro group Ohrenschmaus (German for “ear catcher”) with guitar and drums, its debut album issued earlier this year.

As this article hits the stands, Allemano has a busy schedule till year’s end, with dates throughout the German-speaking countries, including stops in Weimar, Cologne and Zurich, even a whirlwind seven-city tour of her quartet in early November. Though Canada rarely grabs headlines abroad and its citizens are inconspicuous by nature, this does not mean they have nothing to offer. The three musicians profiled here are good examples of that, and we can only hope they can can achieve greater recognition for their efforts.

A new initiative was launched earlier this summer, one aimed at the promotion of jazz composition. The Sophie Desmarais International Composition Competition for Large Jazz Ensemble, named after its sponsor, is an undertaking held under the auspices of the Université de Montréal. It is divided in two categories, the first for students, the second for professionals. While the date for submitting scores coincides with the issuing of this magazine (Oct. 15), there will be a concert of the winning entrees, one for each category, at Salle Claude-Champagne on Nov. 25. On that occasion, the student work will be performed by the university’s own big band, the other to be played by the Orchestre national de Jazz de Montréal, who will top off the evening by revisiting Duke Ellington’s Black, Brown and Beige suite. (For more information on this competition, click on the link here.)