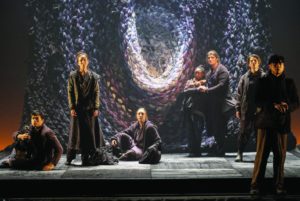 What you missed
A dark double bill (Sept. 25) linking one-act operas by Vaughan Williams (1927) and Hubert Tanguay-Labrosse (premiere). Both deal earnestly with tragedy at sea and the loss of family. The strong cast led by the deep-toned mezzo-soprano Allyson McHardy included some good Atelier prospects. Tanguay-Labrosse proved an effective conductor of both the moody music of Riders and his own more eclectic score. I Musici de Montréal sounded vibrant in the pit of the Théâtre Maisonneuve. Director Édith Patenaude managed the quiet entry of the chorus (the lucid-sounding Ballet Opéra Pantomime) to good effect. An evening in which the foreground drama was subservient to overall mood.

Gripes
The set by Patrice Charbonneau-Brunelle and costumes by Elen Ewing equated bleak with black, although a braided fabric and some background evocation of fire added a little visual relief to Flambeau. The Irish English of John Millington Synge in Riders was sometimes difficult to unravel. French surtitles to the rescue! Arthur Kaptainis

What you missed
A brilliant reading (Sept. 10) of Rachmaninoff’s Rhapsody on a Theme of Paganini by Avan Yu with the Hong Kong Philharmonic under Jaap Van Zweden at the Hong Kong Cultural Centre. The Hong Kong-born Canadian pianist executed the recurring large leaps and challenging glissandi with the right mix of fervour and control. He rode the storm well in this test of dynamics, which often finds the soloist poised on the edge as if in a standoff against an invisible combatant. Also positive was the mournful and meditative Asian premiere of British composer Anna Clyne’s Within her Arms, a study in loss and memory for 15 standing strings that hearkened back to the gentle lilt of Elizabethan music while also echoing the resonant and dreamlike sound fields of New Age.

Gripes
None to speak of, although Dvořák’s Seventh Symphony, the orchestral equivalent of classic rock, admirably executed with the requisite Brahms-like thoroughness, is a document of another age, one of grand sweeping statements, not yet familiar with the unexpected and real-life mass encounter with fire and brimstone. Adam Sacks 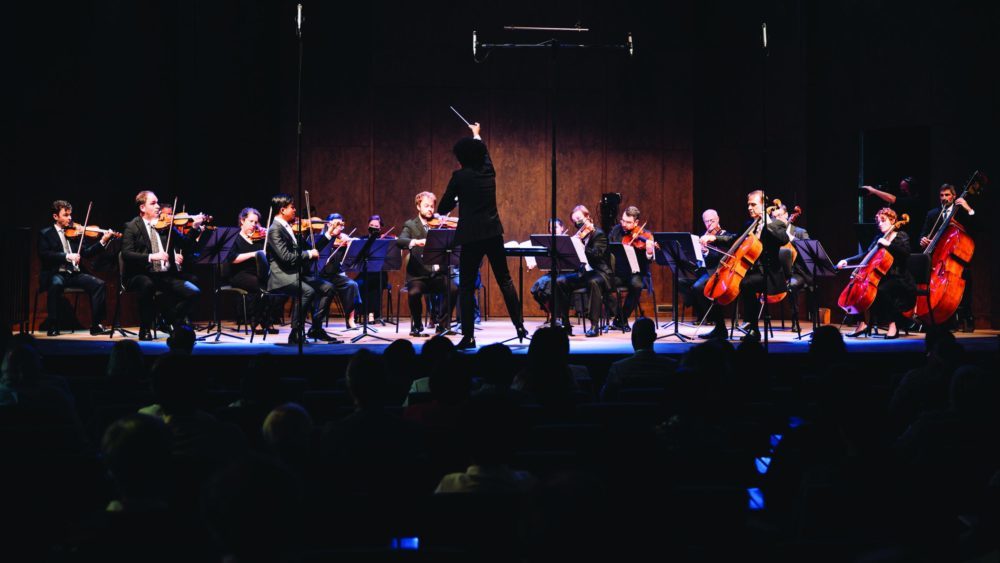 What you missed
From the Orchestre symphonique de Montréal (Sept. 19): the Serenade for 13 Winds by Richard Strauss and the Serenade for Strings by Dvořák. Here was an opportunity to hear two different cohorts from the same orchestra and appreciate their colours. All the breath of romanticism was there. The orchestration was remarkable, especially in Strauss’s andante and Dvořák’s finale. Overall, the fullness and homogeneity of sound permeated the room. Through a whole range of nuances, the OSM succeeded perfectly in conveying the lyricism and the relief which constitute the beauty of this music.

Gripes
Les Violons du Roy began with Bach’s Brandenburg Concerto No. 4, famous for its flutes and violin, and continued with the Suite No. 3 from Handel’s Water Music, which also gives pride of place to flutes. As it worked out, Vincent Lauzer and Caroline Tremblay, on recorders, and Ariane Brisson, on transverse flute, were too often overwhelmed by the weight of the strings. In Bach’s work, the concertmaster Pascale Giguère made her violon speak with ardor and virtuosity, sometimes to excess. Justin Bernard

Gripes
The finale was properly vigorous but not all the pastoral qualities of the first movement emerged. Violins sounded pushy in sustained fortes, of which there were quite a few. Payare’s gestures seemed to outnumber interpretive results. The crowd, however, made clear its appreciation of  his exuberant podium style. There was no printed program or announcement of the pieces played. I wonder how many in the audience knew they were listening to the Overture No. 2 in E Flat Major of Louise Farrenc? AK

What you missed
A true masterpiece, the second of five works heard in this concert, In Auditorium (1998), made an impression with its attractive modernity (Sept. 26). A psychedelic piece so bubbling with ideas that it could make anyone love contemporary music. Among the discoveries, for example, was the sound emitted by wind instruments onstage, picked up and carried forward by other winds placed high, at the level of the balcony. The style of direction was also quite atypical. As it unfolded, conductor Cristian Gort either did not conduct at all, leaving the musicians to make their entries, or conducted with his ten fingers, indicating a sequence of numbers that only the musicians could understand.

Gripes
There were certainly many modern elements that aroused curiosity, but also almost unbearable moments, as the limit of the acoustically tolerable seemed to have been crossed. The noise of broken glass at the beginning of L’être et la réminiscence (2017), the sonic saturation of the saxophones of the Quasar quartet in Brumes matinales et textures urbaines (2007), and the deafening vibrations of the loudspeakers in Interior nuit (2006) considerably affected both the concert experience and the appreciation of the works. It is surprising that there was no public advisory. Ditto for the 2006 short horror film for which André Hamel composed the music. It is not pleasant to imagine a young audience faced with such images. JB

What you missed
An incisive and detailed memorial performance (Sept. 11) of Verdi’s Requiem by the Metropolitan Opera Orchestra and Chorus under Yannick Nézet-Séguin broadcast live from New York on PBS. Dynamics were admirably chosen. While the Dies Irae sections kept their characteristic thrust, they did not lack subtlety. Mezzo-soprano Michelle DeYoung (subbing for Elīna Garanča) navigated her high notes in the Kyrie with some difficulty but nevertheless produced beautiful moments. Soprano Ailyn Pérez, born to sing this part, offered soaring high notes in the Lacrimosa and communicated emotion throughout. Tenor Matthew Polenzani was very effective; bass-baritone Eric Owens, given his vibrato, less so. Simply but beautifully filmed, this Requiem began appropriately with a night-time introduction at Ground Zero by host Misty Copeland.

Gripes
Although trumpets during the Dies Irae were prominently lit, they did not sound like they were offstage, as Verdi intended. PBS cut off the live broadcast in its last few minutes. Marco Monteferrante