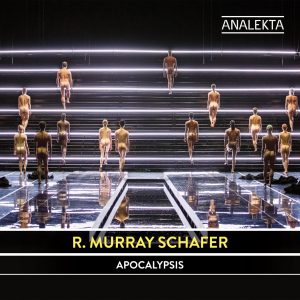 For its 10th Anniversary last June, Toronto’s Luminato Festival staged its most ambitious work to date, R. Murray Schafer’s Apocalypsis. Over 1000 performers from across Canada, both professional and amateur, united to realize this historic music-theatre work, which was performed and recorded in the Sony Centre for the Performing Arts. Due to the massive scale of the work, this is only the second time it was performed (the first was in London, Ontario in 1980), and the first time it had been recorded in its entirety.

The work is divided into two parts: Part One: John’s Vision, Part Two: Credo. The Credo is often performed without the first, so it was important that they be reunited in this two-disc set. Jörn Weisbrodt, the artistic director of the Luminato Festival first listened to Schafer’s Credo while driving. He was gobsmacked, recalling that it was a miracle he did not have a fatal accident.

Though not in a car, I had a similar first experience with Apocalypsis. From the cacophony during John’s proclamation to the music of the spheres in the Credo, I was completely enraptured. One of the highlights of this recording is undoubtedly Tanya Tagaq’s lengthy solo as the Old Woman in the final movement of John’s Vision. The JUNO-Award winning virtuosic throat singer plays the sole survivor of the apocalypse. The peaks and valleys of Tagaq’s lament traverse an entire landscape of human emotion, from breathless heartache to howling mania.

The recoding manages to capture the sheer scale of the production, giving a haunting image of space and scope, in spite of the missing theatrical aspects. Though this is perhaps not easy listening for an afternoon drive, Apocalypsis is good company while you muse about the end of the world and the birth of a new universe.