Mixing a piano-voice demo is essentially a matter of taste, but there are some technical aspects that should not be overlooked.

In this article we will take you through some of these technical aspects in order to help singers who are venturing out on their own in the production of their demos. It would be a shame to spoil a good sound recording by ignoring these technical aspects since they can make all the difference between an amateur or professional rendering.

In previous articles we have seen that a piano-voice recording often consists of two types of microphone placements: general microphones and spot microphones, each microphone having its own independent track. During the mixing it will be a question of combining these microphones with potentially an addition of artificial reverberation (to homogenize everything or to compensate for a lack of natural reverberation during the recording). The amount of use of these different microphones, as well as the amount and type of reverberation, can be considered an artistic aspect since it is rather a matter of taste. Last time we talked about delay, phase shifts and final mix levels. Here we discuss filters and compression.

Filter what is unnecessary

Filters (aka equalizers) modify the frequency response of a sound, therefore affecting the timbre of an instrument. They also can be a helpful tool to clean up a mix without changing its texture. It is simple and effective to apply filters that allow you to clean up a mix of cumbersome noises that are non-musical and unwanted (such as traffic, the air-conditioning, thumps, etc.). For example, applying a low-cut filter that eliminates all sounds lower than 100Hz and a high-cut filter that eliminates all sounds higher than 14000Hz can lighten a mix and make it less aggressive. The elimination of parasitic noise depends not only on the chosen frequency but also on the steepness of the cutoff slope of the filter. For example, a filter with a slope of 24dB/octave will be more effective than with a slope of 6dB/octave. On the other hand, a filter with a slope of 24dB/octave will be more audible than with a softer slope; since it is unnatural for the ear to hear a recording when all the frequencies below 100Hz have been eliminated, the listener is more likely to notice that a filter is used. If the filter slope is less steep (say 6 or 12dB/octave), the use of the filter becomes transparent to the listener. The choice of the slope is a balance between effectively eliminating parasitic noises and preserving the “natural” sound of the instruments.

Last bit of advice: when you cut the low-end with a high-pass filter, make sure you eliminate only what is below the key frequency of the musical piece. If your piece is in the key of “A,” only cut the frequencies below 110Hz. The 110Hz frequency being an A, if you eliminate sounds below 150Hz, for example, you are potentially eliminating the lowest key frequency of your song. Due to its role in the song, this frequency must generally be left untouched. 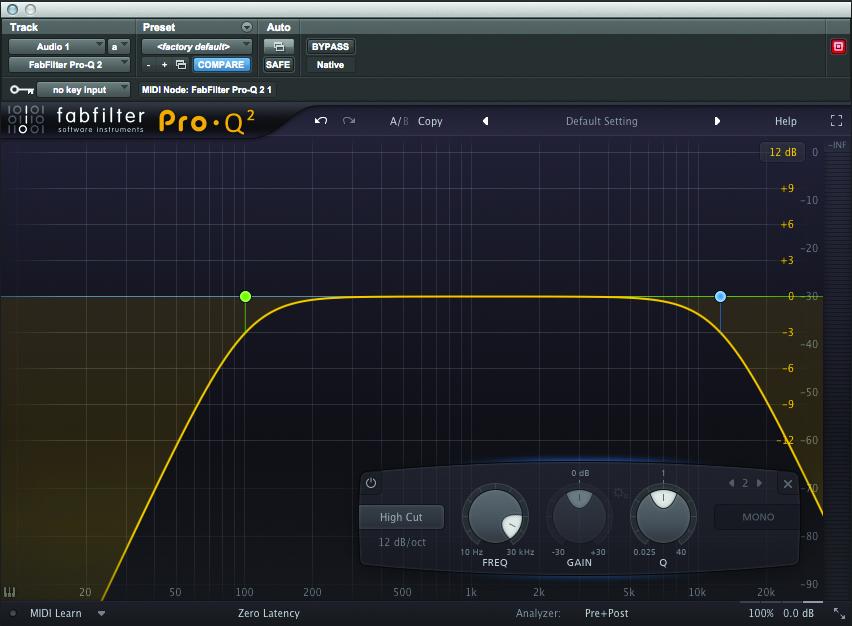 Compression or no compression?

Theoretically, in classical music one should not use compressors since they reduce the dynamic range of the musical performance. In other words, a compressor reduces the gap between the loudest and quietest parts of a recording. Since the performers (pianist and singer in our case) follow the dynamics written in the score or given by the conductor, the presence of a compressor which could change a fortissimo part (ff) into a forte (f) is seen with suspicion.

One may wonder then what is the point of using compressors? When mixing, compressors make it possible to achieve a higher overall sound level: the mix will be louder, an often sought-after effect in pop music, advertising or film, for example.

The compressor works in two stages: first it attenuates the level of the parts of our recording that exceed a chosen threshold. It therefore only affects the loud parts and leaves the quiet parts unscathed. Next, the compressor raises the overall level of the recording.

That being said, a compressor can be used in subtle ways to improve the experience for the listener without really affecting the performance: It is possible to use only the attenuation function of the compressor to reduce a high soprano note that jumps a little too much in the face of the listener. In this case, the threshold is set so that the compressor only intervenes when the loudest note is sung.

Karim Blondy is the Director of the Audio Program at MUSITECHNIC COLLEGE.