You are at:Home»La Scena Online»CD and Book Reviews»CD Review | Beethoven: Complete Music for Cello and Piano 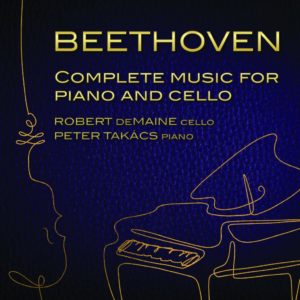 In a comprehensive list of works written for cello and piano, which would amount to numerous opus numbers, Beethoven’s contributions are slim indeed, at least in numbers.

Yet each piece he wrote for that format is worth its weight in gold. The wealth of ideas is so substantial in this facet of his oeuvre that it warrants rediscovery at every listen. So rich in invention are these works that their impact is greater than hundreds written by lesser talents.

In this recently issued twin-CD set on Leaf Music, cellist Robert deMaine and pianist Peter Takács begin with Opus 5, which comprises his first and second sonatas, followed by Opuses 69 and 102, then on to the three variations in G, F and E flat Major. The liner notes are unequivocal in claiming that Beethoven single-handedly invented the modern cello sonata in 1796 with that first opus. A benchmark it is indeed, because cello sonatas up until that time were showcases for one or the other rather than dialogues between equal partners, a feat no one else had achieved before him. When listening to deMaine and Takács, their conversations never flag, the cello’s rich and lyrical timbre wedding itself marvelously to the piano’s virtuosity and power. The chemistry is front and center in their performance of other Beethoven variations, those to Mozart’s theme to the Enchanted Flute in particular. As all equals do in conversation, the players take turns to chime in with their best repartees. What more is there to say than to recommended this package without reservation.