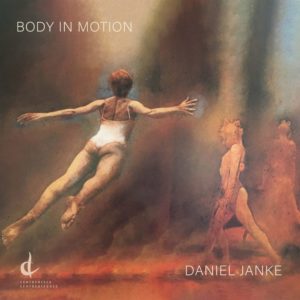 “Body in Motion is an homage to choreographers and dancers of the world. They are the hardest workers in the peforming arts. They are an inspiration.” This is what Canadian composer Daniel Janke had to say about his new Centredisques album. After Songs of Small Resistance in 2021, he has returned with three chamber music works and a solo piano work.

We can only recommend this album. Listeners are charmed in the first work, Martha Black’s Reel, by an addictive, looping motif. They may recognize the influence of Celtic musical culture—that of the fiddlers— in the work, but other influences soon begin to inform Janke’s compositions.

What follows is a meditative ambience that accompanies the listener, alongside the persistent bewitching sounds of the violins. The presence of a long pedal as a fundamental note, both below and above the ornamental melody, further reinforces this impression. The second movement of Quatuor à cordes No. 2 “Rivière” is marked by a much stronger tension, dissonances born of the repeated friction between semitones. The brief chromatics, numerous in the third movement, intelligently suggest the current of a river. In the fourth and final movement, the listener returns to something meditative, but the music seems to carry a muted suffering.

Yaa Asantewaa (Part 1) is imbued with Orientalism, most notable in the choice for a minor mode and the resulting impression of free improvisation. As for the last work of the program, The Bells places the piano in the spotlight. There is a mesmerizing charm comparable to that of the first work, and its haunting motif provides a pleasant buzz feeling. The head spins.

The only regrettable part about this album is that it’s too short (just over 45 minutes).