27, the new opera about Gertrude Stein and her artistic cronies by composer Ricky Ian Gordon and librettist Royce Vavrek, was commissioned by and premiered at Opera Theatre of Saint Louis in 2014. But the current City Center incarnation represents both a New York and a world premiere of the opera, as now reimagined and expanded by the composer and his original creative team to honor the 75th anniversary of that New York institution formerly known as the “Collegiate Chorale” (founded by legendary conductor Robert Shaw in 1941), and now dubbed MasterVoices.

As noted in an earlier article, Gertrude Stein’s Saturday evening salons in her Paris apartment at 27 rue de Fleurus might be considered in retrospect a sort of incubator of all things “modern.” Here, in the early 20th Century, the likes of Picasso and Matisse, F. Scott Fitzgerald and Hemingway, Man Ray and other artists, writers, and avant-garde headliners of the day regularly convened to promote themselves, critique each other, and look for sanction from self-appointed artistic arbiter-in-chief, Gertrude Stein. 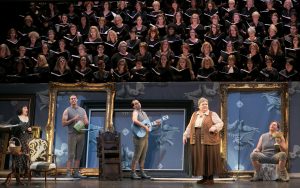 Gordon’s and Vavrek’s opera does capture much of that dynamic in a fluky progression of vignettes. But, at its heart, the opera is really the story of Stein’s relationship with Alice B. Toklas, Stein’s putative secretary and – more intimately and significantly – her life partner and great love.

“It was an extraordinary relationship,” says librettist Vavrek of Stein and Toklas. “They were married, for all intents and purposes. And they demanded homonormativity in Paris in the early 20th Century.”

Ironically, however, the “norm” to which they subscribe in the opera might today be considered rather retrograde for any marriage, gay or straight. Stein models something close to a traditionally chauvinistic “husband,” role, while Alice mirthfully and repeatedly affirms a tickertape of quite traditional “wifely” functions – cooking, cleaning, mending, and quiet subordination.

Still, who’s to quibble? It’s a marriage that apparently worked. “I don’t think Gertrude would ever have been able to do what she did with her life had it not been for Alice,” remarks mezzo-soprano Stephanie Blythe, who plays Stein.

Indeed, Blythe more than inhabits the role of Stein. She reigns in it – an empress of all she surveys. Blythe fashions composer Gordon’s lovely melodic lines into majestic strands of vocal pearls; and, by turns imperious, quizzical, evasive, and amorous, she is never less than plenipotent, even managing Stein’s quirky catalogue of endearments for Alice – my “cake,” my “pussy”(!) … my “lobster”(?) – with fearless aplomb. It’s a fun and full performance. 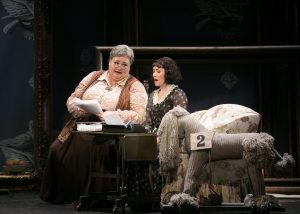 Soprano Heidi Stober, sylphlike, silken-voiced, equally well finesses the superficially more retiring role of Alice with subtlety and warmth. Her superb, aureate tones infuse even the character’s quotidian housewifery with a glow of mystery – a priestess sustaining her and Stein’s little world by secret, smiling rites camouflaged as drudgework. Stober notably renders the character’s late-opera arietta, in which she bids farewell to the dying Gertrude, quite delicately and movingly.

Stober also fully rises to Alice’s occasional, unexpected moments of forthright strength, as in her opposition to the brawling Ernest Hemingway. (To correct an erratum in the October 18 article, it is Hemingway, not Picasso, whom Alice appears to regard as an unseemly vulgarian; her regard for Picasso is evident throughout.)

The opera does make a bit too flagrant the repeated self-assertions by Stein that she is “historical” and “a genius.” Less telling, more showing, would be more edifying.

Still, a segment of greatly amusing and gratifying dramatic corrective late in the opera is provided via the blunt, no-holds-barred Hemingway – seemingly the only character capable of applying some well-deserved critical pushback to Stein – when he calls out both Stein’s talent and her literary output as … well, what bulls do to grow greener pastures.

“I have a hard time reading her writing,” admits Blythe of Stein; still, “what I appreciate about her is her taste. If she had done nothing else, she inspired some of the greatest art. She was a catalyst for art. And that by itself is enough.” 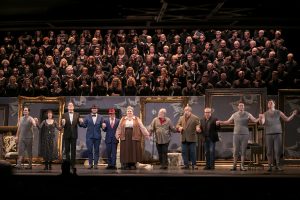 Besides Blythe as Stein and Stober as Alice, all of the opera’s other onstage characters are played by a trio of versatile male singers – rich-voiced baritone Tobias Greenhalgh plays Leo Stein as well as photographer Man Ray; sonorous bass-baritone Daniel Brevik plays Henri Matisse and Ernest Hemingway; and lush-voiced tenor Theo Lebow plays Pablo Picasso and F. Scott Fitzgerald. Additionally, the three play a comic trio of vain Parisian “wives” in gloriously ridiculous mufti, and also become at various times the living embodiments of the salon’s paintings (backed up vocally in the latter duty by the stereophonic splendor of MasterVoices).

The set, adapted from elements of the original Saint Louis production design by Allen Moyer, places the action in a comfortable abstraction of Parisian domesticity downstage, dominated by a hodgepodge of oversized, empty picture frames, while the steeply raked bleachers of the large MasterVoices chorus as backdrop put the proceedings in a kind of celestial-choir context. The effect is an odd (and decidedly modernist) impression that a secular little chamber opera has precociously perched itself in the lap of a big and indulgent sacred oratorio.

Director James Robinson – who, as artistic director of Opera Theatre of Saint Louis, has been with the project from its inception – effectively and inventively keeps the action, and the picture frames, moving, while MasterVoices artistic director Ted Sperling conducts the production, and the forces of the renowned Orchestra of St. Luke’s, with verve, class, and momentum.

It was Sperling who originally consulted Gordon about the prospect that the composer might create something special for the chorus’ 75th jubilee. In suggesting a re-mounting of 27 specially expanded for MasterVoices, Gordon affirmed that “there are so many places where they seem to fit in organically.”

“I said to Ted that I knew in my heart it would be easy and right to expand it in this way,” says Gordon. “And I was right. It made so much sense.”

Gordon is also quick to counter any characterization of the City Center/MasterVoices production as mere “concert opera.”

“This might be conceptually exactly how it should be done,” he says, clearly looking ahead to the prospect of future productions of 27 elsewhere.