Brotherly Love, Independence, the Phillie Phanatic – this city has always been a hotbed of innovative and big ideas. How apt, then, that Opera Philadelphia has taken on a big idea of its own, having committed to the future of indigenous American opera with a 2011 pledge to present, every season for ten years, a major new American operatic work.

More than halfway through that initial pledge period, the company’s “American Repertoire Program” can claim impressive achievements, including Dark Sisters in 2012; A Coffin in Egypt in 2014; and Charlie Parker’s Yardbird in 2015. And now, with the world premiere of Breaking the Waves (September 22 through October 1; viewed September 24), the company can boast the first such work fostered entirely within the Opera Philly program apparatus. 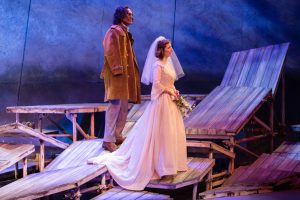 Breaking the Waves’s composer, Missy Mazzoli, was Opera Philadelphia’s Composer in Residence from 2012 through 2015, during which time she not only composed the opera but worked with its librettist Royce Vavrek, director James Darrah, musical director Steven Osgood, and a dedicated cast to burnish the piece in a series of major workshops.

This year’s premiere, it should be noted, is a co-production with the increasingly indispensable Beth Morrison Projects. And the results are stunning.

Imagine the brainstorming session: how about an opera adaptation of that 1996 Lars von Trier film about religion, repression, lust, love, brain damage and maritime oil drilling – not necessarily in that order – set in a remote corner of Scotland’s Inner Hebrides in the 1970s?

Okay. But how in the world do you start with a grainy Dogma95 film, executed in shaky and sometimes out-of-focus handheld-camera style, exemplifying an aesthetic of intentional and flagrant imperfection, full of mumbling characters, prolonged silences, vast exteriors and repugnant sexual antics, and think “opera”? Or, having thought it, how do you make that opera?

If you’re librettist Royce Vavrek (whose own brain waves were the primum mobile here) and composer Missy Mazzoli, you do it by an alchemical combo of fearlessness, visionary collaborative rapport, dogged determination, and unique talent. Breaking the Waves, the opera, both is and is not the Lars von Trier film – which proves to be a good thing on both counts. But the way in which the film has been reinvented for the operatic stage carries its own fascination. The process seems quite as intriguing as the product.

The High Road, the Low Road… 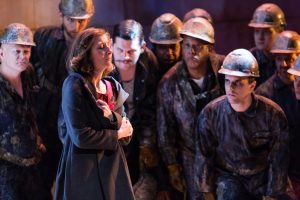 The von Trier film fairly revels in off-putting, even gross things – unkempt principals with wind-whipped wisps of hair perpetually plaguing their eyes and mouths; explicit sex scenes that tweak the verges of pornography, yet with such clinical ugliness as to argue for celibacy; men-at-work montages that ooze mud, scum and crude oil as palpably as the Deepwater Horizon disaster; fumbling and bloody surgical procedures that might easily be snuff film outtakes.

Yet, yes, there is also a mysterious feeling of transcendence to it all – part of the reason the film is celebrated. Von Trier manages this, however, by misdirection, somehow hinting at redemption mostly by reeling out a horizontal pageant of life brutish, nasty and (for some) short.

Mazzoli and Vavrek have not shied from the disturbing, but have also grappled more directly with the sublime, giving simple yet glowing language to (and about) bodies, along with heartbreakingly urgent music about the journey of the soul.

It Happened in the Hebrides 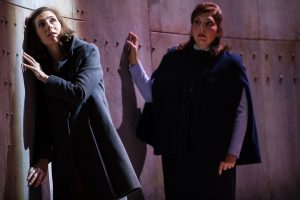 Retained, of course, are the film’s characters and major plot points.

Simple but headstrong Bess has, against the misgivings of her family and strict Calvinist community (who consider her damaged and incapable of mature discernment), asserted her love for an “outsider” – an offshore oil-rig worker named Jan – and is allowed to marry him. (Not unlike A Light in the Piazza, perceptions of “normality” here appear to be culturally contingent, with a stranger finding enchantment where Bess’ “own people” construe only defect.)

Things turn bad, however, when Jan must return to the offshore platform for an extended stint. Bess’s hysteria confirms the community’s apprehensions. Worse, Bess, who regularly enacts for herself both sides of private colloquies with God, prays for Jan’s return to her and, as if in response, Jan suffers a catastrophic accident on the rig – a kind of “Monkey’s Paw” moment.

Confined to hospital, seemingly permanently paralyzed, Jan now encourages Bess to have affairs with other men. She is initially horrified. But when Jan suggests that only living vicariously through Bess’ sexual life will serve to keep him alive, she accedes, persuaded that honoring her husband’s wishes is her highest spiritual duty, and that this is a test from God to see if she warrants the gift of her husband’s return to health.

“Bess, You is Everyone’s Woman Now”

Bess engages in increasingly frequent and reckless sex with strangers, convinced that the rallying and ebbing of Jan’s medical condition track in parallel with her sacrifice of her own body for his sake. Bess comes to see herself as the physical conduit for Jan’s only access to grace. Bess the protagonist becomes vessel and victim, malefactor and metaphor, catalyst and – perhaps – even Christ.

It’s all a wildly oddball deformation of theology, and Mazzoli and Vavrek make wondrous theater of it, secure in the lavish power of operatic amplitude.

Vavrek himself is a native of rural Alberta, Canada (from a small town called “Sexsmith,” no less!), and his libretto seizes on themes, ideas, and metaphors latent in the film, cultivating them to full ripeness for Mazzoli’s musical treatment. The absence of bells in the steeple of the local church – important in the film – gets even bigger play here; so, too, does the grim fatalism of the local elders’ mirthless, hell-obsessed religion. The trinitarian implications of the story’s three female characters – Mother, Daughter and Spirit (this last in the person of Bess’ loving and protective sister-in-law, Dodo) – take on mythological resonance the film barely touches. 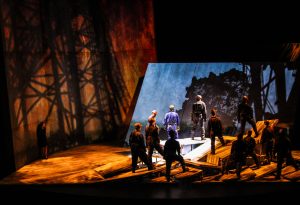 Midway through Act I, a hyper-virile ensemble “interlude” evoking life on the oil rig (“Drill deep, men!”) is on one level a wry homage to antecedent “anvil chorus” operatic set pieces. Moreover, its clangorous machismo and barely concealed sexual innuendo also foreshadow the violent abuses Bess will later suffer. But the number does something more, providing a key to the opera as a whole – verticality, penetration, the disclosing of layers.

Indeed, composer Mazzoli has crafted a score of richly layered dissonances and simultaneities. A lot goes on at the same time in Breaking the Waves, the opera. And, as Mazzoli herself notes, that’s one of the things that distinguishes the form for her. “The words can be saying one thing, the music another thing, and the staging something else again.”

For his part, director James Darrah takes full advantage of this multivalence, too. Bess moves fluidly in and out of scenes, situations, tableaux, encounters with other bodies, in a constant flux between the literal and the figurative, the real and the imagined, the carnal and the sacred. For most of the opera, all the loci of the action – hospital, church, oil rig, graveyard – remain, at least in our minds’ eyes, simultaneously present, like the multiple “houses” of a medieval morality play, all ranged before us, all mutely allegorizing the precipitous contiguity of heaven and hell.

A Gathering of the Clans 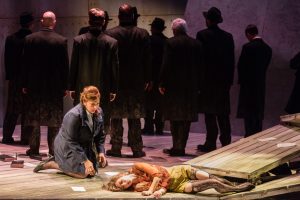 Kiera Duffy portrays Bess with gamine grace and shadowless purity. Her gorgeous and unaffected birdsong vocalism during passages of contentment or rapture is mesmerizing, and render all the more terrifying her utter abandonment to moments of anger or anguish. Chilling, too, are episodes in which, her voice gone suddenly gruff, Duffy’s compact body emits the oracular voice of her God. The role is brilliantly varied and crucial – the center without which the opera clearly would not hold – and Duffy seems born for it.

“It’s the role I’ve been waiting my whole life to play,” Duffy says. “I just didn’t know it.”

Lanky, well-hewn baritone John Moore, as Bess’ outsider-lover Jan, supplies ideal contrast and chemistry with Duffy’s Bess. He is both more attractive and somehow more sinister than the character as portrayed in von Trier’s film, thus making his and Bess’ eroticism more compelling, but our anxiety over their relationship more acute. Moore’s voice, wonderfully rich in its middle register yet also capable of sudden brutality, blossoms in tenderer moment with a surreal sensuality – a dark caress with a glow of embers to it which, even as it seduces, makes one wonder if more daemonic forces may be at play. 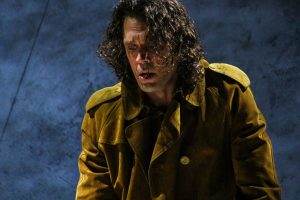 Jan (baritone John Moore) is heartbroken to find Bess’s devotion to him has led her to ruin. Photo by Nicholas Korkos for Opera Philadelphia.

In the role of Dodo, mezzo-soprano Eve Gigliotti is a formidable and luscious-voiced presence, far more active, resourceful and assertive than the well-intended but rather more wan character portrayed in von Trier’s film. And the role of Doctor Richardson, the putative rationalist who does his level best to disabuse Bess of her fatal delusions, is sung with sensitivity and lustrous sheen by tenor David Portillo. His weightless execution of the neo-Baroque ornaments Mazzoli uniquely provides for his role belie the character’s intellectualism, suggesting a twinge of awe in the presence of Bess’ obdurate faith.

The chamber orchestra performs with brilliant commitment to complex requisitions from composer Mazzoli. There are effects here rarely heard elsewhere, and the players fully rise to the occasion – strings called on to scrape their bows below the bridge; strings, brass and woodwinds executing eerie and rangy glissandi, slides, even moans that might be the echoes of fierce primordial beasts. There are percussion effects that involve a curiosity-shop-full of found items, from various-sized chains to an automobile brake drum. The score is consummately handled by conductor Steven Osgood, who clearly is as intimate with it as a master kabbalist with his Zohar.

The abstract and highly versatile scenic design by Adam Rigg, expressionist projections by Adam Larsen, evocative lighting by Pablo Santiago and ingenious costumes by Chrisi Karvonides are all first-rate.

Breaking the Waves breaks rules, breaks new ground, and breaks the heart. It is an opera for which one ought to be steeled, but from which one will depart both intellectually stimulated and emotionally ravished.

Playing at the beautiful, acoustically perfect and intimate Perelman Theater at Philadelphia’s Kimmel Center for the Performing Arts, Breaking the Waves opened on September 22, 2016, with additional performance scheduled September 24, 27, 29 and October 1.

The opera can next be seen as part of the 2017 PROTOTYPE Festival at New York University’s Skirball Center on January 6, 7 and 9, 2017.