Verdi’s gutsy 1851 operatic melodrama, Rigoletto, gets a fascinating, stylish, and unflinchingly close study in the Berkshire Opera Festival’s new production, running through August 31 at the Colonial Theatre in Pittsfield, Massachusetts (viewed here at the August 25 opening).

Under director Jonathon Loy (who is also the festival’s co-founder), Verdi’s tale of a deformed court jester who seeks revenge on the nobleman who has defiled his daughter plays out amidst stark lights and a schematized staging that bring into high relief both the score’s unique contours and the characters’ profoundly contrasting motives and emotions. 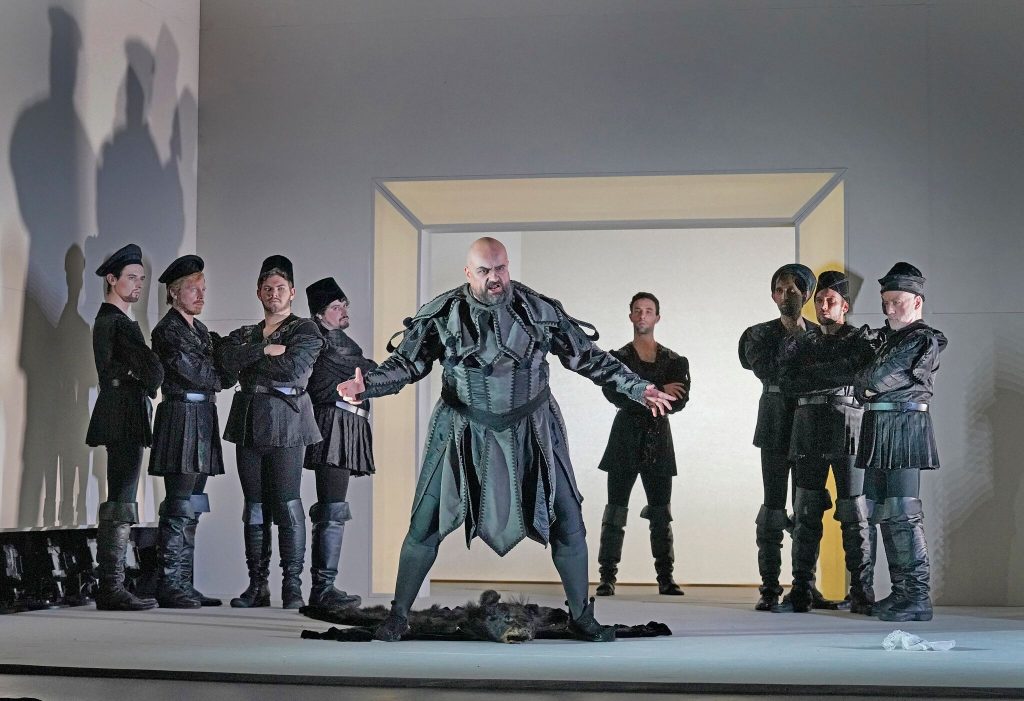 What’s a Father to Do?

Verdi had apparently been quite taken with an earlier Victor Hugo play, Le roi s’amuse, which depicted orgiastic exploits at the court of France’s 16th-century King François I, and the tribulations of his jester who is determined to shield his own daughter from the lecherous monarch’s advances at all costs. The play had been suppressed for its unseemly take on royal comportment – and Verdi and his librettist, Francesco Maria Piave, would similarly run afoul of censors in northern Italy with their opera adaptation, until they agreed to demote the lubricious antagonist from a king to a mere autocratic duke of unspecified Christian name.

But the elements of Hugo’s play which most fascinated Verdi survived intact: the character of the hunchbacked court jester (what was it with Hugo and hunchbacks?) whose outward deformity mirrors the tortured and warped burls of his own psyche; and paranoia over a curse placed on the jester by an aristocrat he has mocked – a curse that will manifest as a horrid and ironic trick of fate at the opera’s climax.

Rigoletto is pretty gothic and twisted stuff; and while there are victims, there are no heroes. Still, Verdi decks it opulently, with lilting melodies, ravishing duets capped by intricately twined cadenzas, a celebrated Act III quartet (“bella figila dell’amore”) that weaves rage, love, lust and carnal insouciance so vividly as to seem acid etched, and, oh yes, that immortally catchy misogynistic earworm, La donna è mobile.

There have been many scenically busier, more elaborate productions of Rigoletto, but surely few that have made such confident and effective recourse to stillness, visual geometry, and astutely composed tableaux. Costumes (by Charles R. Caine) jibe with the opera’s intended setting of Renaissance Mantua, but a slew of other stylistic, visual and design stratagems, starting with a clinical white set (by Stephen Dobay) that might be an operating room or a showcase window, cue us to look deeper than the level of historic pageant, byzantine plot mechanics, or superficial musical pleasure.

This Rigoletto disorients on the surface while getting deep under the skin. 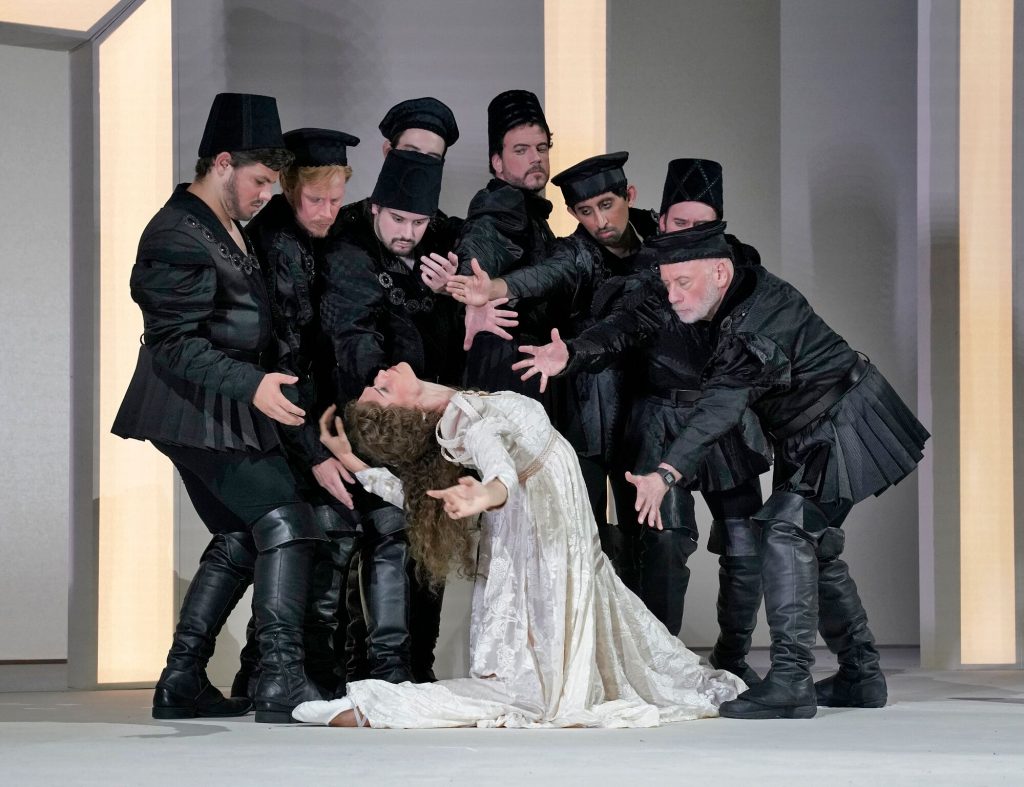 The Duke’s opening aria, “questa o quella,” about the fleeting appeal of women and the fungibility of their charms, often played as a confidential aside or louche amuse-gueule, here comes off as a declaratory public anthem to amorality. Act I’s courtly ball, often staged for festive color, is transformed into a mechanized and deadly serious rite of submission. The corps of male courtiers, cowed and sycophantic panders all in black, meld into a single, synchronous pimping machine for the Duke’s pleasure, hoisting aloft the white-clad Countess Ceprano – the Duke’s sacrificial victim du jour – like a captured game carcass ready for the spit.

Hunt trophies are a visual through-line in this Rigoletto: a chandelier adorned with antlers, set at a tellingly skewed angle, adorns the Duke’s aseptic palace in Act I. A later scene of carnal conquest is staged on a bearskin rug.

The mise en scene of this Rigoletto is incised with boldly achromatic strokes. The one exception is a special-effect coup de theatre in Act II, when Rigoletto’s daughter, Gilda, confesses to her father that, against his every admonition, she has not only fallen in love with the Duke, but has given herself to him (“tutte le feste al tempio”). Through the course of her disclosures, Loy and his lighting designer, John Froelich, gradually bathe the stage in a gathering crimson light until it throbs like an open wound. Gilda as scarlet woman? Rigoletto seeing red? An anticipation of the bloodletting to come? It’s all of that.

All the Duke’s Men – and Women

The Berkshire Opera Festival cast for Rigoletto is topnotch. The Duke – a role famously adaptable to a wide range of vocal types, from leggiero to more heavily dramatic – is played with suave, dark-toned charisma by tenor Jonathan Tetelman. His vocal quality becomes an auditory touchstone for the generally tenebrous sound palette of this Rigoletto (and how Verdi did love to dig into the lurid dramatic power of dark voices). As the hired assassin Sparafucile, bass-baritone Joseph Barron achieves wonderfully spooky sonorities, as does bass-baritone John Cheek as the Count Monterone, who issues the crucially resonant Maledizione! that so haunts and harries Rigoletto to his fate. 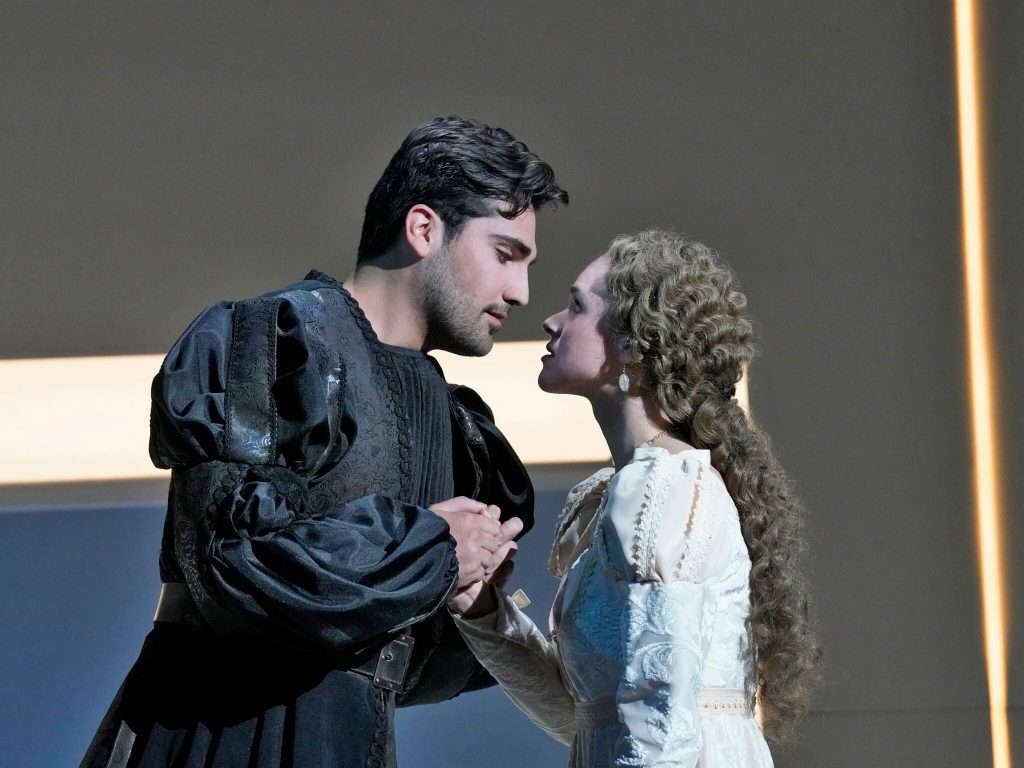 Among the women, mezzosoprano Maya Lahyani brings a sumptuous roundness of tone (and a very seductive physicality) to the role of the amorous Maddalena. And as Rigoletto’s beautiful, naive, wayward daughter, Gilda, soprano Maria Valdes spins out gorgeous and heartbreaking threads of iridescent tracery over the darkling dramatic landscape around her.

Finally, as the titular tragic jester, baritone Sebastian Catana brings robust and mournful fullness to Rigoletto. Dramatically, physically and vocally large, this is a Rigoletto of heroic complexity – a forerunner at one and the same time of Verdi’s Otello and Iago, with the brooding introspection of the former, and the congenitally gnarled corruption of the latter.

Conductor Brian Garman (the festival’s other co-founder) brings consummate insight to Verdi’s music, replete with its many breakout innovations and memorable touches (Garman also contributes a richly detailed and insightful program essay for the production).

This Rigoletto, which marks the Berkshire Opera Festival’s third successful season in a row, seems clear confirmation of the organization’s destined longevity. Long may they present such top-tier work in so culturally rich and beautiful a setting (and long may they continue their laudable practice of preceding each performance with a full orchestral performance of The Star-Spangled Banner).

The festival has announced its 2019 production of Donizetti’s Don Pasquale, which will play at new premises – the Mahaiwe Performing Arts Center in Great Barrington.

Further information about the Berkshire Opera Festival, and tickets for Rigoletto, can be accessed at www.berkshireoperafestival.org/.