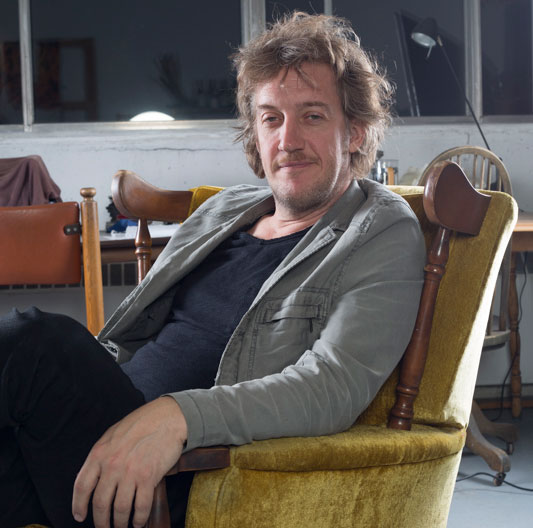 Passionate about Québécois culture, nature, and wilderness canoeing, filmmaker Jean-Philippe Duval seems to have been predestined to direct the film Chasse-galerie : la légende, which will hit the silver screen in February. We caught up with him in his studio.

Hailing from Québec City, the director, who has also been at the helm of the popular TV series Unité 9 for the past four years, originally chose a career in biology.

“I discovered cinema in a class in CÉGEP,” he says. “I was 18 and I fell in love watching François Truffaut’s La Nuit américaine (Day for Night). That’s the film that made me want to become a filmmaker. I finished my CÉGEP in science and I left to do a baccalaureate in visual arts with a major in cinema at the Université de Montréal. I studied at the same time as Denis Villeneuve, who was at UQÀM, and André Turpin at Concordia.”

Duval had the good fortune to start making films in university, and he hasn’t stopped since.

He subsequently directed numerous documentaries and TV films, of which several were ordered for French television. His first truly personal feature film was Matroni et moi in 1999, adapted from a play by Alexis Martin. He was 30.

Duval’s filmography reveals a strong penchant for Québécois art and culture as well as a marked interest for nature and the environment. Among his directing credits are the documentaries Les réfugiés de la planète bleue (The Refugees of the Blue Planet) on environmental refugees (with Hélène Choquette), Lumière des oiseaux, about Québécois poet and ornithologist Pierre Morency, L’Odyssée baroque, about the Cirque du Soleil, and Marché Jean-Talon. He also coproduced and codirected the TV series Martin sur la route, featuring well-known chef Martin Picard of the restaurant Au pied de cochon.

“I like Québécois artists and culture: the poets, the writers,” he says. “My best friends are creators.”

The film that has contributed the most to Duval’s prestige is without a doubt his second fictional feature film, Dédé, à travers les brumes, which came out in 2009. The film recounts the life of André Fortin, the singer of the band Les Colocs, who ended his life in 2000.

“In this film, I discovered my talent for directing actors. I realized that it had helped me to make a lot of documentaries, because it allowed me to observe humans and life. Some directors, at 25, want to make creative films; as for me, I wanted to discover the world, to travel. My path meant that when I started doing fiction, I had acquired a certain amount of knowledge about the human condition. With Dédé and Unité 9, I explored the human soul and psyche and it was exciting. I would say that I’m pretty humanist in my choice of subjects.”

The makings of a legend

The legend of the “chasse-galerie” or flying canoe is without a doubt one of the best known in Québec folklore. It has inspired songs by Claude Dubois and Michel Rivard (sung by La Bottine souriante) and even appears on the label of the popular brand of beer Maudite. It’s therefore a wonder that it wasn’t made into a film sooner.

“At the Université de Montréal, I had written an adaptation of La chasse-galerie for my screenwriting class,” recalls Duval. He later learned the SODEC (Québec’s department for funding cultural enterprises) had received over 20 requests for funding for similarly-inspired films over the course of several years, including one from Gilles Carle. For a variety of reasons, none of these projects had been successful.

“One of the reasons is definitely the fact that making a canoe fly is no easy task,” says Duval. “Special effects have improved and become more accessible than ever in the last five years. It’s still expensive, but it’s nothing compared to what it would have cost 20 years ago, and you wouldn’t have been able to get as impressive a result.”

Five years ago, co-producer Réal Chabot saw Dédé, à travers les brumes, which he liked. He suggested that Jean-Philippe Duval direct a film based on the flying canoe without even knowing that the latter had a fondness for the legend when he was just a film student.

“I told him, ‘You’ve certainly found the right guy.’ Because it’s not just that I’ve been interested in the story for a long time, but I’m a forest guy. I have a hunting camp and I come from a family of foresters. And my father did a Master’s degree in literature, specializing in Québécois legends. When I was little, he would tell us a lot of stories at home. When I told my father that I was going to make a film about the chasse-galerie, he couldn’t believe it.”

Réal Chabot had already laid the groundwork for the project with screenwriter Mario Bolduc. Jean-Philippe Duval wanted to partner with writer Guillame Vigneault, son of Gilles Vigneault, and they rewrote the script together.

“Because legends of that era were transmitted orally, there are different versions of the chasse-galerie. The most definitive and well-known version is probably the one by Honoré Beaugrand. Of course, Guillaume and I asked our respective fathers what they knew about the legend, but we realized that it was also up to us to interpret it. In the film, we kept the main elements of the legend, but we also imagined a parallel plot.”

For the director, the presence of supernatural elements is also a way to discuss the reality of nineteenth-century Québec.

“The Devil and God were real things to people in 1830,” he says. “I didn’t want to tell a story with a modern point of view. In Québec, we have a special relationship with the Catholic religion. Back then, if someone was said to be damned, if there was a curse, it was very real. It was necessary to get that into the actors’ minds. I told them, ‘From the moment you’ve made a pact with Satan, you’ve got to believe it.’”

Duval also wanted to go beyond the supernatural to paint a portrait of the times that was as realistic as possible. A copy of the book La vie dans les camps de bûcherons au temps de la pitoune (published by Septentrion), about life in the lumber camps of the Canada of yesteryear, lies on the director’s desk.

“I felt like doing a historical film,” he says. “Of course it’s a legend and it’s about a flying canoe; it’s fantastical. But I didn’t want to treat it as if it was magical. It’s not a fairy tale. I did some digging to find the difference between a fairy tale and a legend. A fairy tale is something more fanciful, something that is decidedly imaginary, while a legend is often inspired by real events. It has become a legend because a true story has become distorted, like that of Marie-Josephte Corriveau.”

In this respect, Duval’s film is different from films like Babine by Fred Pellerin or Ésimésac by Luc Picard, which are magical tales stemming from the imagination of the poet from Saint-Élie-de-Caxton.

“I’m not a fantastical filmmaker and for me, it’s more interesting to do a historical drama that contains elements of fantasy. We built a real lumber camp in Chertsey in the Lanaudière region according to nineteenth-century models and photos. Everything was carefully studied with an eye to historical reality: the lifestyle, the tools used, the way to cut trees.”

Chasse-galerie: la légende had a budget of $7 million. To compare, the film Louis Cyr: l’homme le plus fort du monde, a great box office success in Québec in 2013, had a budget of $8.5 million. Shooting lasted 32 days, including 30 days outdoors in winter.

The special effects were done in Montréal by Oblique, a studio that has worked on big Hollywood films such as The Aviator with Leonardo DiCaprio, Brokeback Mountain, and the epic 300.

The soundtrack was composed by Éloi Painchaud and Jorane, who also did the music for Louis Cyr.

Initially, the film, at a runtime of 100 minutes, was to come out on December 25, 2015. The release was pushed back to February 26, 2016 in order to give the studio time to fine-tune the special effects. Over 1500 to 2000 shots, the film includes 450 shots using special effects. Moreover, the release of the highly anticipated Star Wars film on December 18 is taking over a large number of silver screens across Québec, which would have prevented Chasse-galerie from being screened as widely as necessary to ensure a satisfactory distribution.

The legend of the flying canoe

In 1900 Honoré Beaugrand, mayor of Montréal from 1885 to 1887, published a collection of tales including that of the “chasse-galerie”, first published ten years earlier in the newspaper La Patrie, of which Beaugrand was the founder.

“The tale itself is based on a popular belief that goes back to the era of the coureurs des bois and the voyageurs of the North-West. The ‘shanty-men’ continued the tradition, and the legends are especially known among the riverside parishes of the St. Lawrence. I’ve met more than one old voyageur who swears to having seen bark canoes full of the ‘possessed’ sailing through the air, going to see their sweethearts, guided by Beelzebub.”

In Beaugrand’s version, on New Year’s Eve, lumberjacks in a camp north of Ottawa decide to “run the chasse-galerie,” thus risking their immortal souls, to go see their sweethearts one hundred leagues away in Lavaltrie. In order to make the celestial voyage aboard a flying bark canoe, they must not speak the name of God, nor touch any crosses on the church steeples. But they must also swear an oath to Satan. If even one of them happens to say God’s name or touch a cross during the voyage, they will be damned. They end up returning to camp after an eventful night, waking up in their beds. Their comrades tell them that they were found nearby, drunk in a snow bank. An English translation of Beaugrand’s text was first published in the American Century Magazine in August 1892.