The Canada Council for the Arts released its five-year plan in April. It addressed the importance of diversity and opening the cultural sector to new, more marginalized audiences so that Canadian society can recognize itself in the makeup of the cultural sector. Reconstruction of this sector, the Council notes, “will require considerable public and private investment, a restoration of the audiences already in place before the pandemic, the engagement of new audiences and an unprecedented advocacy for increased access to health services, arts and culture.”

When it comes to reaching new audiences, the most important francophone performing arts gathering in America, RIDEAU – the ­Association professionnelle des diffuseurs de spectacles – plays a decisive role. The RIDEAU event, which usually takes place every year in Quebec City in February (this year, in April and in a virtual format), aims to connect presenters with local artists whose work is ready for dissemination through the French-speaking world. The April edition was crucial to the revival of the performing arts in the year to come.

The programming, which ran from April 20 to 23, featured six musical showcases comprising a total of 18 proposals, including only one in classical music. There were seven in contemporary and classical dance, including two adaptations of classical works: José Navas with his interpretation of Schubert’s Winterreise and the French choreographer Yvann Alexandre offering a rereading of Swan Lake. The diversity was obvious. A case in point was the story of Mononk Jules, a Wendat hero, as presented by his grand-nephew, the author, performer and puppeteer Jocelyn Sioui, who stressed the “obligation of memory” and the need to “restore certain parts of First Nations history and correct the errors.”

At the crossroads of virtual reality and theatre, Violette, an immersive, hybrid and intimate work, dealt with an equally timely issue, sexual violence, but in this case, the violence suffered by women with intellectual disabilities: between 40% and 70% of intellectually disabled girls will be attacked during their youth. In addition to shining a light on a specific reality endured by a marginalized group, the work was performed by people directly involved. Two of the three actresses in Violette were trained at the Muses – Centre des arts de la scène, a school specializing in vocational training for people with disabilities.

Nevertheless, according to RIDEAU general manager Julie-Anne Richard, it is not so much the diversity of artists as the artistic quality of the offerings that takes priority. About 10 jurors per discipline assess the proposals to determine those which will have an official or international showcase: “We ask if the work is likely to interest the general public, if the artist and the proposal are ready to go on tour, if the process is successful … The proposals are already and more and more diversified. It is clear that artists are evolving along with society and that this is reflected in the artistic offering.” 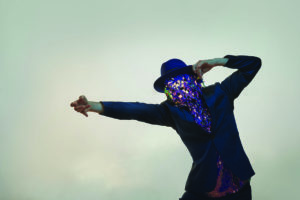 More than the connection of the artists to one or another social group, it is the multidisciplinary nature of the platform that is the catalyst of diversity. Circus arts integrate music, song, dance and theatre (Cirque Alphonse); hip-hop dance brings together acrobatics, theatre, humor and music (The Ruggeds); world music with psychedelic rock tunes are played on the guembri (Bab L’Bluz)…many presentations are off the beaten track. As Adrien Bussy, José Navas’ agent, observes, “[RIDEAU] has a specific character which is multidisciplinary. It’s the same with dance. Ballet according to its formula, or even a contemporary dance performance that adheres to the rules of the discipline, would have little chance of being selected. Presenters are not here for these self-contained forms of performance.”

The only representative from the world of classical music, the Quatuor Esca, illustrates this concept well. The female string quartet blends pop and contemporary music with classical, performing popular classics like “The Sound of Silence” by Simon & Garfunkel with arrangements by François Vallières, who also composed the title work, Fragments – Trois mouvements et demi pour quatuor à cordes. “Si les bateaux” by Gilles Vigneault, with arrangements by Antoine Gratton, was also on the program, just after the Piano Quintet Op. 81 of Antonín Dvořák. “Beyond bringing a more diverse audience to classical music, we want to make audiences dream by offering them a concept without boundaries between styles.”

Does the classical genre have what it takes to attract different audiences, including young people? Sarah Martineau, violist of the quartet, cites the recent initiatives of certain large orchestras to make classical music widely accessible, such as the OSM Pop series, which invites popular artists to come and play their hits with the orchestra. She recalls that “to reach the youngest effectively, there needs to be early education that really sends the message that music is accessible to all. The elite and inaccessible image of the genre should not prevent you from learning about music in the style that you love.”

Is the multidisciplinary approach a catalyst for the reopening of the arts scene? RIDEAU certainly presents us with an open window on the question.