Philosopher, humanist, innovator—all words that describe ­Californian Kent Nagano, the long-maned maestro taking Montreal by storm with sold-out concerts and standing ­ovations. Everywhere, Nagano is greeted like a savior given the vacuum left by Charles Dutoit’s departure from the ­Montreal Symphony Orchestra in 2002. The musicians love him, as do the business community and fans. To date, the only detractors seem to be a few music critics. 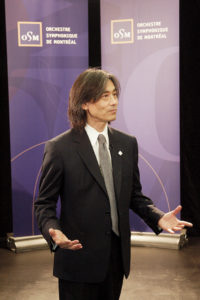 There is quite a mystique surrounding the 55-year old overachieving conductor who has made 72 recordings with some of the music world’s who’s who. From symphonies to opera, he seems to do it all. A student of French composer Olivier Messiaen, Nagano is also known for being a champion of contemporary music from Schoenberg and Boulez to Zappa. To hear him rave about Bach and Mozart is surprising. No wonder it is difficult to fully grasp the man.

Part of the mystery is self-imposed. Naganomania took seed in early 2003 when speculation grew about his taking over the MSO. The first time Nagano met the Montreal press in February of that year he appeared somewhat uncomfortable during a Dutoit-type round table scrum with the city’s classical music reporters at Place des Arts’ Green Room. By the time he was officially announced as the new artistic director of the MSO in 2004, he opted for individual interviews—five or ten minutes here and there with each reporter, a structure which plays well for TV sound bites but is ineffective for print scribes since Nagano is known for his long and reflective responses generously peppered with anecdotes and metaphors.

During his first press meetings, Nagano chose to speak only in English. The grumblings from Quebec’s French press became more vocal after the season launch in February 2006, when he gave a long all-English speech. “The reflex of going back and forth between English and French is difficult for me right now,” he admitted at the time. Nevertheless, Nagano silenced the critics when he received an honourary doctorate from the University of Montreal last May by delivering the convocation address entirely in French. He hasn’t looked back since.

As if Montreal were unworthy of a director of his stature, Nagano is regarded reverently by almost everyone, including his staff and the media. Moreover, to say that Kent Nagano is in constant demand whenever he’s in town is an understatement. “The maestro is like a salami,” remarks his Montreal assistant. “You get a sliver of him here and there.” Despite this, the man of a thousand projects took a two-month sabbatical last summer because “…for the last 7 years, different kinds of experiences and stimuli have happened to me. It is important to take perspective from a period of intense growth. Also, it is important to really leave the performance stage to properly research and study, to make sure that the source of inspiration and creativity doesn’t run dry. Coming to Montreal is a big challenge.” 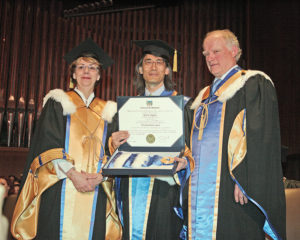 During his time away, Nagano took formal courses in medieval and renaissance music, refreshed his language skills (particularly German and Italian), practiced his own instruments and studied composition with a former teacher. “I don’t consider myself a composer,” he says humbly. “My music is not important enough for concert stage.” He explains that he uses his skills to make arrangements or bridge material for encores or cuts to certain pieces.

Nagano has also been consulting with two professors about his longstanding book project on the spiritual and compositional development of music in Germany during the 19th-century. Musing philosophically he comments, “Looking back 100 years gives a perspective of somehow seeing from where we are coming and that helps establish ideas of identity and self-identity, and from that we can have a clear sense of the world where we live. My publisher had attended several lectures I had given five years ago and they thought it would prove to be an interesting basis for a book.” He jokes that it will likely take ten more years to complete this project.

When you listen to Nagano speak, you observe his penchant for using the words “development” and “tradition,” often pertaining to the future. By emphasizing these words, it’s as if they represent him and are a key part of the message of moving forward by looking back, something he seems to want to impart to his audience. For Nagano, “Development is different from progress. Progress suggests that the orchestra is getting better. The orchestra is already great, but it also has a deep and profound talent pool of great potential, which I want to develop to see where it’s going to take us. The key to establishing the highest levels is to make sure you don’t [just]maintain a level. Either you are developing and getting stronger, or you maintain and get worse. The most important aspect is to have a collective sense of purpose and direction, which implies participation from all aspects of the organization.” He sees “tradition” as “…part of the soul of a community. It’s important that we evolve the tradition to ensure the arts for the future.”

Two of the factors that continue to nurture Naganomania in Montreal are the maestro’s clear leadership and his collaborative approach to music making. He believes that an exceptional and emotional performance requires “heart, spirit, drama and emotion…[that]come from the input of individuals.” During rehearsals and behind closed doors, he is open and approachable, a distinct contrast to Dutoit’s authoritarian style. Orchestra members and choristers alike cite Nagano’s ability to relate the musical aim to real-world analogies and symbolisms that work well with the under-50 crowd. “I feel the orchestra has new life, new breath,” shares principal trumpeter, Paul Merkelo. He is confident that with Nagano’s vision, the MSO will return to the forefront of the classical music world. Bass trombonist, Pierre Beaudry, likes the fact that the maestro keeps him on his toes, which in turn helps him continue to appreciate the many wonders of music.

The enthusiasm is mutual. Last February, after the orchestra performed Bach’s St. John Passion, Nagano was very complimentary of his musicians when he remarked, “The development and evolution of the orchestra has been going much faster than I had initially thought possible.” The maestro likens his six-year tenure to painting a tableau in that,”…the more sophisticated and complex takes time, so rather than packing everything into one year, it’s [more]interesting to let a five-year period exist, so that at the end, you see a much broader tableau, a rich and complete picture. A lot of the esthetic lines will only be complete five seasons from now.” He plans to include more Bach in the MSO’s repertoire.

Montreal audiences heard the Nagano MSO play Beethoven’s 9th Symphony in September during his inaugural concert as artistic director, which was broadcast and telecast live on Espace Musique and Radio Canada. Although the general reaction was positive, most critics took issue with the fast 62-minute tempo. Members of the choir report that in a quest for authenticity, Nagano insisted on treating the choral finale like a German beer-drinking song. Unfortunately, the quick tempo had the soloists gasping, leading some to sound screechy. Although Nagano’s keen attention to detail brought clarity to some sections it was at the sacrifice of the global phrasing. Most disappointing was the slow third movement, which was marked molto cantabile, but which ended up neither molto nor cantabile—the pace was too fast for a discernable melody, and the entire movement lacked intensity and emotion.

Despite the fact that the 62-minute performance was a far cry from the 74-minute von Karajan 9th, orchestra members and choristers were quick to defend the maestro’s chamber music approach to the famous choral work. The November performances of Schoenberg’s Gurre-Lieder and Beethoven’s pastoral 6th Symphony demonstrated more of this chamber-music approach. This time, the placement of the orchestra with 2nd violins and violas on the right, and cellos and basses in the middle made for a better performance leading one to surmise that the Nagano-MSO transformation is on its way.

Only time will tell what mark Nagano’s leadership will ultimately make on the MSO (and on Montreal culture) but the paradox of Kent Nagano the man is sometimes evident in his responses. When asked his age he sighs, “Well, I’m rather old,” and when asked how he would like the first half of his career as a conductor to be ­remembered, he pauses for a moment, and then laughingly chides, “I’m not that old!”