You are at:Home»Scena Arts»Film»Mad Dog Labine, a Docufiction About Hunting

Mad Dog Labine stars Ève-Marie Martin, a young Lindsay left by herself, while her father, played by Emmanuel Bilodeau, goes hunting. This pouting, rebellious teenager travels the village roads with her friend Justine (Zoé Audet) to “play cans.” Both Ève-Marie and Justine purchase scratch-and-win tickets and miraculously win the lottery with their bets made from stolen cans. Their challenge: find a trustworthy adult to receive the prize.

While the images in Mad Dog Labine pass us by and the first few minutes of this feature-length film provide us with a nature backdrop, viewers may think they’re transported to some Acadian community, given the young character’s accent and level of speech. Think again. Jonathan Beaulieu-Cyr and Renaud Lessard’s docufiction was produced in the Outaouais municipality of Pontiac, located near the Ontario border.

“The Pontiac is a distinct area in the Outaouais, for English had a huge influence on French and vice-versa,” said Beaulieu-Cyr, who grew up north of the Pontiac. “Although the history differs from that of Franco-Ontarians, common points are to be had with respect to keeping the French language alive.

“Keeping the French language alive was not the main subject of the film, even though producing a film in French is an asset. The Pontiac is made of scattered villages – just like islands. I think this is the first film produced in the area.”

Renaud Lessard has been delighted by the Pontiac since his childhood. “We grew up in the Aylmer borough of Gatineau, across from Ottawa,” said Lessard. “We often spent weekends at our Luskville cottage, the gateway to Pontiac. As an adult, I discovered that the Pontiac was an unfamiliar territory for most Canadians. The Pontiac became a unique area to showcase on screen after I became more interested in discovering its villages and communities.” 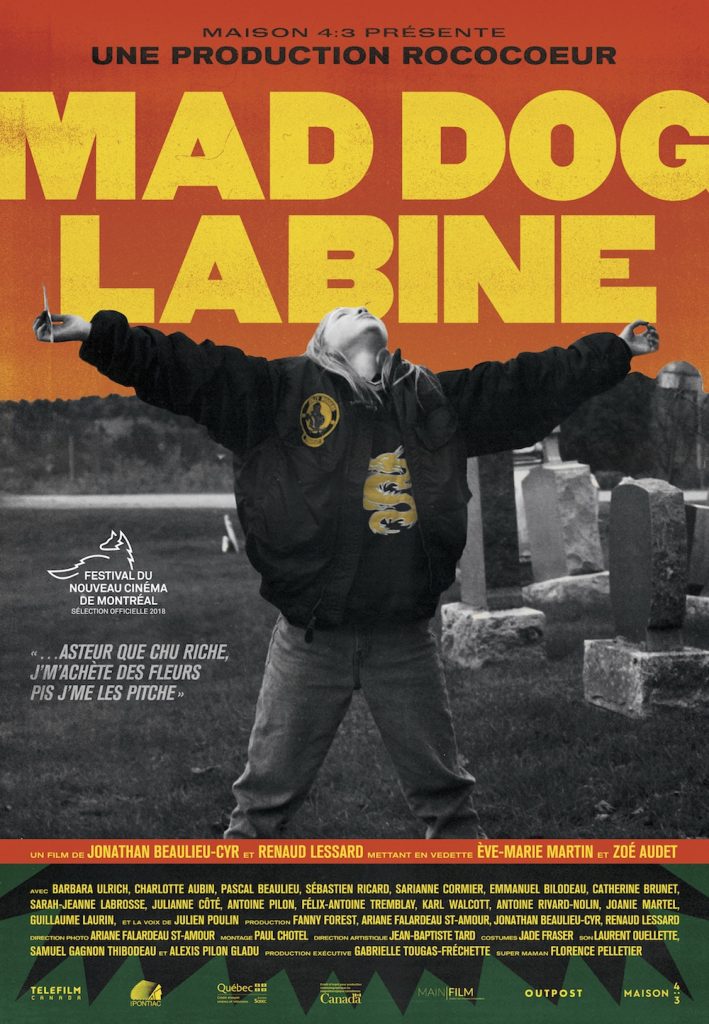 Postsecondary studies in territory imaging are closely related to Beaulieu-Cyr’s filmmaking strategy: “Every image overlaps. Renaud and I have been producing films in outlying areas for many years. We attempted to write Mad Dog Labine in collaboration with the Pontiac community. This method is like a documentary but includes a touch of fiction inspired by real life,” he said.

Lessard added that the docufiction genre took hold during the audition process, a style closer to an interview than traditional casting. “We were really touched by the youth and their stories; it was impossible to stick to the scenario without giving youth a voice,” he mentioned. In addition to availing themselves of resources and connections in the Pontiac and financial aid from the namesake regional county municipality, Beaulieu-Cyr and Lessard received funding from Telefilm Canada’s microbudget to produce their 85-minute feature-length film.

Two non-professional actors made the feature-length film come to life, thus creating an honest, easy, and optimistic portrait of life and adolescence in outlying areas. “A slight exaggerated touch has been added to the film. The film is indeed honest and frank. Some situations are over the top, too,” said Beaulieu-Cyr. “That said, the film remains real. Mad Dog is Little Lindsay’s nickname.”

The two filmmakers relied on invaluable help from actor Charlotte Aubin. She plays a minor role in Mad Dog Labine; she was the one who coached the teens. “Charlotte began her career as a novice before becoming a full-fledged professional actor. She has been working for a long time. She was on the set for four days. In the end, she stayed with us for a month and a half,” said Beaulieu-Cyr, adding that “her stay was useful, for she could rephrase what we wanted to say to the teens.”

Though Mad Dog Labine is the duo’s first feature-length film since graduating from Concordia University’s Mel Hoppenheim School of Cinema in 2015, this is not the first time Beaulieu-Cyr and Lessard have worked together. “We’ve been used to working with each other for almost ten years, often assuming roles that have changed from one project to the other, whether we’re producer, scriptwriter, or producer,” said Lessard, who is now working on his second feature-length film. Florida-Montréal, Pisser dehors (Piss Off), and Ferraille are included in the duo’s filmography.

“We regularly work together and have a team with which we work regularly, such as our photo director and editor,” added Lessard’s colleague, Jonathan. “We are part of Rococœur, a group of filmmakers from Concordia University. We’re now working on Cœur d’or, a web series fiction produced by Renaud.” The action takes place on Île d’Orléans and stars 20 actors.

Presented as a world premiere during the 2018 Festival du nouveau cinéma and winner of the Prix Focus, Mad Dog Labine will be open in theatres on April 5 and will be shown during the Rendez-vous Québec Cinéma. The seventh festival dedicated to cinema
will take place from Feb. 20 to March 2.
www.rendez-vous.quebeccinema.ca