You are at:Home»Classical Music»Contemporary»The 35th FIMAV, a major artistic success

Victoriaville, 22 May 2019 – Now that the 35th edition of the Festival International de Musique Actuelle de Victoriaville (FIMAV) is over, the team and board of Productions Plateforme announce very positive results for every programming component: concerts, sound art installations in public spaces, visual arts and experimental short film screenings.

Sound art installations in public spaces: Year 10 under the sign of maturity

The circuit of sound art installations in public spaces, a free-to-visit project that was in its 10th edition this year, has obviously reached a notorious maturity. It has grown from a dozen guided tours for school groups at the beginning to an average of 40 groups in recent years. And the impact of this outdoor component of the Festival on residents is becoming more and more concrete. As a result, the field team witnessed a number of signs that our cultural mediation efforts are being successful: visitors have a greater understanding of the works and draw parallels with installations from previous years, and children who came for a guided tour with their classmates come back with their family to perform guiding duties. Also, despite the cold and grim weather we had all week, only a handful of tours were cancelled and the number of visitors did not suffer: 12,000, just like in 2018. It all shows how much of a must the circuit has become for Victoriaville residents, as well as for festival-goers from out of town, regardless of the weather! 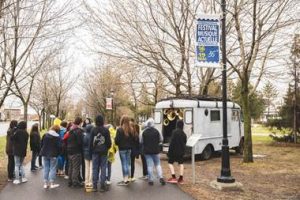 A group of youngsters visiting the circuit, near the work “La Bête à sept têtes” by the collective L’Orchestre d’hommes-orchestres. Photo Martin Morissette.

This year’s program of concerts, visual arts and experimental short films drew a lot of attention upon its announcement, but we were not anticipating such levels of enthusiasm and satisfaction from all involved: the team, the artists, and most of all the public! We saw an increase in attendance at the experimental short film screenings, a component that has been gaining in popularity since its first edition in 2017. Audiences consistently offered heartfelt ovations and generous applause at all concerts. Several memorable moments sprinkled the week. We can state without hesitation that the 35th edition of FIMAV was rich in artistic discoveries and rewarding experiences.

The Mayor of the City of Victoriaville, Mr. André Bellavance, surprised the FIMAV organization at the opening night’s cocktail of honour by delivering an honorary certificate to highlight the importance of the event for Victoriaville and its surrounding area. The 36th edition of FIMAV will take place from May 14 to 17, 2020! 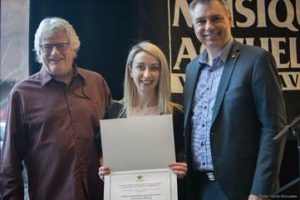 From left to right: Michel Levasseur (General Manager and Artistic Director of FIMAV), Odrée St-Hilaire Cantin (President of the Board of Productions Plateforme Inc.), and André Bellavance (Mayor of the City of Victoriaville). Photo Martin Morissette.