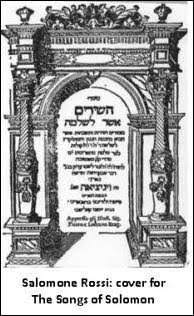 At a time when the Jews of Mantua were compelled to wear a yellow badge, violinist and composer Salomone Rossi (1570-1630) was so highly regarded that he was excused.
Along with the considerable secular music he wrote for the court, Rossi created numerous Hebrew works for the synagogue.  The Musicians In Ordinary perform selections of this music in a concert called Songs of Solomon, Friday, November 27, 8 p.m. at Fr. Madden Hall, Carr Bldg., St. Michael’s College, University of Toronto, 100 St Joseph St., Toronto.  Tickets, $30, $20 for students and seniors, are available at the door.
Alexandra Guerson (http://guerson.com), a specialist in history and Jewish studies, will deliver a talk at 7:30 p.m., putting the music in context. Her PhD thesis focused on Jewish/Moslem/Christian relations in Spain.
Further information is available by calling 416-535-9956 or visitingwww.musiciansinordinary.ca.
Soprano Hallie Fishel and lutenist John Edwards are joined by violinists Christopher Verrette and Patricia Ahern and other singers in sacred works for three to five voices, along with some of Rossi’s innovative sonatas for two violins and chitarrone – or theorbo as this six foot, long-necked lute was often called.
John Edwards notes that, “Rossi was a great composer and as remarkable an innovator as his colleague at Mantua, Claudio Monteverdi.  He’s the first composer to publish music in the ‘trio-sonata’ texture beloved of Handel, Bach, and all Baroque composers. That he appears to have managed to convince a Rabbi to let him experiment with adapting late Renaissance church music for use in the synagogue is extraordinary, even though it didn’t catch on.”
Rossi is considered a link between the late Italian Renaissance period and early Baroque.  His output, along with commentary and biographical info are available at https://en.wikipedia.org/wiki/Salamone_Rossi.