You are at:Home»Arts Industry»Meet 20 of the most talented young organists in the world! During the Canadian International Organ Competition In Montreal!
Advertisement / Publicité

Montreal, April 11, 2017 – The names of the 20 candidates that will take part in the 2017 edition of the Canadian International Organ Competition (CIOC) has now been released.These candidates were selected from 56 applicants by a preliminary jury consisting of 5 prominent organists from across North America: Christian Lane, Raymond Perrin, William Porter, Régis Rousseau, and Patricia Wright. All candidates had to be under the age of 35 to be eligible.

The 20 candidates come to Montreal for the 4th edition of the CIOC which is comprised of 3 live elimination rounds from October 6-21, 2017, all of which will be open to the public.The first round will take place at the Immaculée Conception church, while the second round will be at L’Église Saint-Jean-Baptiste and the final round at the Notre-Dame Basilica.

“The level of playing that we heard during this year’s preliminary jury was simply astonishing,” underscored John Grew, Artistic Director of the Canadian International Organ Competition. “I cannot wait for these young virtuosi from 12 different countries to join us in Montreal this October. The competition will be fierce, and I am sure that audience will be completely enthralled, every step of the way. We have many exciting new elements for our 2017 edition.”

The candidates for the 2017 CIOC are: 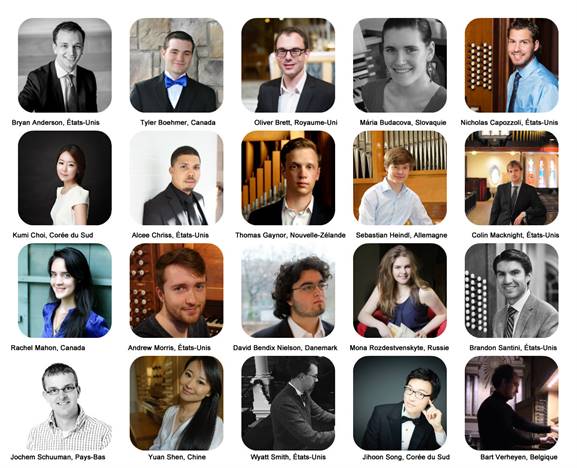 The Canadian International Organ Competition (CIOC) is an organization devoted to the promotion of organ music in Quebec and Canada, through discovery and initiation activities for the general public. This includes concerts, workshops, educational events, an annual festival in Montréal each October, and our prestigious triennial intentional competition. CIOC activities are presented under the artistic leadership of eminent Canadian organist John Grew, and supported by the hard work and dedication of the Board of Directors and staff. www.ciocm.org

Since 2008, the CIOC recognizes the best and most promising young organists from around the world, through the work of our prestigious international juries. Previous grand prize winners include Frédéric Champion (France, 2008), Christian Lane (USA, 2011) and David Baskeyfield (United-Kingdom 2014). The live competition rounds, which are open to the public, take place in Montreal from October 6-21, 2017.