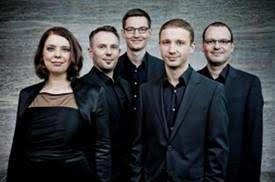 Calmus Ensemble
“Calmus Ensemble is stunning in its vocal variety, mastery. The group held the audience…spellbound with its artistry….in matters of pitch, diction and musical shaping, I’ve never heard finer ensemble singing.” – The Washington Post
Mooredale Concerts resonates with the holiday season by presenting Christmas Carols of the World, featuring Germany’s prize–winning vocal quintet Calmus Ensemble on its Canadian debut tour.
The special presentation takes place Sunday, December 13, 3:15 p.m. at Walter Hall, 80 Queen’s Park alHallHa
Crescent.  Tickets are $40; $20 for those under age 30, available online at www.mooredaleconcerts.com, or by calling416-922-3714 ext. 103.
Hard on the heels of its highly successful 2014 recording,Madrigals of Madness – which made the New York Times’ Top 10 CD list – Calmus performs selections from its newest CD,Christmas Carols of the World.  The selections will shine a spotlight on timeless and classical creations from the Renaissance to the present day. Some are sacred, some are secular, and some even humorous and entertaining – all woven in the theme of a popular holiday tradition.
MUSIC & TRUFFLES: Young audiences will enjoy an hour-long, interactive version of the concert, when Calmus Ensemble performs at Music & Truffles, the same day and place – Sunday, December 13, 1:15 p.m. at Walter Hall.  Emcee “Joanna” will encourage audience participation. Adults wanting to learn more about music and music-making are also welcome.  Tickets are $13 for all, available from Mooredale Concerts.  Everyone receives a chocolate truffle at the end.
THE CALMUS ENSEMBLE – http://calmus.de/en
A perfect blend of sound, precision, lightness and wit, the Calmus Ensemble has forged a refined sound, which few a cappella groups achieve. Its five Leipzig musicians – Anja Pöche, soprano; Sebastian Krause, countertenor; Tobias Pöche, tenor; Ludwig Böhme, baritone; and Manuel Helmeke, bass – have won a string of international prizes and competitions, including the ECHO Klassik and Supersonic Award. In 2010, they made their Carnegie Hall debut. Naturally at home in the vocal music of the Renaissance, Baroque and Romantic periods, they also explore modern repertoire.  They are prolific artists having recorded 16 CDs in various genres.
Toronto is the Ensemble’s second Canadian stop, the first being High River, Alberta.