In spite of the health crisis, Le Vivier has no plans to cease operations. After a summer consisting of several outdoor activities, the producers specializing in new music have an ambitious fall season planned, punctuated by anniversaries and celebrations. The opening event of Sept. 12, for instance, isn’t simply a concert but a full afternoon including a double bill and roundtable. Additionally, over the next few months, Le Vivier will present anniversary concerts in celebration of 40 years of Production SuperMusique (PSM), 20 years of the Quatuor Bozzini, and 10 years of the Ensemble Paramirabo. We were able to gather information on these three Quebec ensembles, as well as hear from the artistic director of Le Vivier, Emmanuelle Lizière.

This fall at Le Vivier, many approaches to new music will coexist. “We will open the season with an event that is important to us, our H20 day,” Lizière says. “This event is related to our project titled The Sounds of Water, which we have been running for a year both in and around Montreal. We wanted to put water at the forefront, as an essential element, and put a spotlight on new approaches to the environment.

“Quarantine forced us all individually to become aware of sounds we might not have consciously heard before. The idea behind our fall concerts is to shine a light on these essential elements.”

PSM has also chosen water as a theme. However, it has taken it in an entirely different musical direction, combining electroacoustics, improvisation and contemporary music. Events will be presented under the global title The Source, as a nod to their status as pioneers in this area of new music. “Our first concert is called Les affluents, and explores our repertoire from 1980 through 1999,” says Joane Hétu, co-director of PSM. “We had to choose just six pieces, but those selected give a good idea of the music that we were playing through those years.

“For our second concert, Les rapides, we cover the period from 2000 through until 2020. This concert is dedicated to the performance of works with graphic scores on which we have worked, and which represents an integral part of the evolution and development of PSM. In this case, we have also taken an interest in the conducting gesture of improvisation.” Finally, the third concert, titled Le Fleuve, will allow PSM to catapult itself into the future. In this case, four new works will be premiered.

For its first concert, on Sept. 22, the Ensemble Paramirabo will present a new work by young composer Christopher Goddard, as well as works by Toru Takemitsu, Kaija Saariaho, Salvatore Sciarrino and Zosha Di Castri, for mixed chamber ensemble. “This concert features the musicians from our “Projet iso,” with a special emphasis on the harp, played by Robin Best, principal harp for the Drummondville Symphony Orchestra,” says Jeffrey Stonehouse, the ensemble’s artistic director. 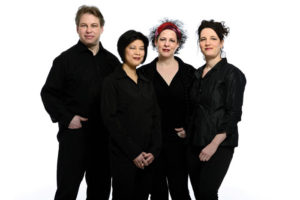 On Nov. 11, it will be the Quatuor Bozzini’s turn to make a return to the stage. “We chose to play works by our longstanding collaborators (Michael Oesterle, Jennifer Walshe, Thomas Stiegler, Christopher Butterfield, Cassandra Miller), who have all written several works for us,” says Isabelle Bozzini, the ensemble’s co-founder.

For these three ensembles, their return to the stage represents an event worthy of celebration. The Quatuor Bozzini was supposed to complete its first tour of 2020 in Europe (Paris, Birmingham, Mons, Boras and Berlin) after an appearance in Colorado. The night of their arrival in the United States, however, the pandemic was declared. “We ended up playing our last concert at the University of Colorado in Colorado Springs. We then spend the 12th and 13th of March adjusting our performance schedules and buying return tickets to Montreal before air travel was inundated.”

“For us, it was a disaster,” confides Danielle Pallardy Roger, co-director of SuperMusique. “It all happened overnight. We were a few days away from presenting a concert with the Joker choir and the Université de Montréal’s oscillator ensemble. Our entire spring season was shaken up with concert cancellations. Our hope now is that we will be able to create a beautiful 2020-21 season, in celebration of our 40th anniversary.”

Le Vivier’s artistic director remains optimistic. In her opinion, the pandemic has allowed, among other things, time to regroup and readjust, and thus reinforce the group’s mission. “Artists need our help to move forward,” she says. “There are many venues that aren’t yet open. Thanks to our summer programming, for example, six ensembles were able to perform in the Quartier des Spectacles. The idea is to support artists who haven’t been able to perform during this time, so that they can eventually find their way back to the stage.”

“Not being able to see each other or make music together was exceptionally sad,” says Stonehouse. “We were so happy to be able to put together outdoor concerts. For us, collaboration remains a deep joy. Whether it be between us as chamber musicians or with composers, we enjoy the spirit of sharing in music making.”

Isabelle Bozzini echoes this: “We have been fortunate to have two decades of work, rich in artistic encounters, multiple challenges and diverse learning experiences. Playing different musical styles has fed our art technically, stylistically and esthetically.”

For more on the Le Vivier program, visit www.levivier.ca