You are at:Home»Arts Industry»Maison Symphonique: Reopening in the Covid-19 Era

As the 2020-21 season begins, musicians and concertgoers face a challenge no one could have anticipated before the Covid-19 pandemic. Concert halls and churches that would normally be full of listeners will operate at only a fraction of capacity.

This will certainly be the case at the Maison symphonique in Montreal. Inaugurated in 2011, the home of the Montreal Symphony Orchestra and the Orchestre Métropolitain has often had all 2,100 of its seats full. For the time being, it will be operating at a reduced capacity, as Place des Arts can legally accommodate only 250 spectators at a given time.

The question arises: is our beloved Maison symphonique well positioned for a comeback?

One area in which the Maison Symphonique is well equipped is in its ventilation system. Many concert halls are outfitted with outdated systems, which operate by directing a large volume of cold air from above through warm air, allowing it to reach ground level at a comfortable temperature.

This system is often loud, as it requires fans, and can produce cold conditions. It also lacks energy efficiency. The Maison symphonique, by contrast, operates a state-of-the-art system that slowly brings in air from beneath every single seat, cooling it slowly to a comfortable temperature, and then letting it seep out gently through diffusers. 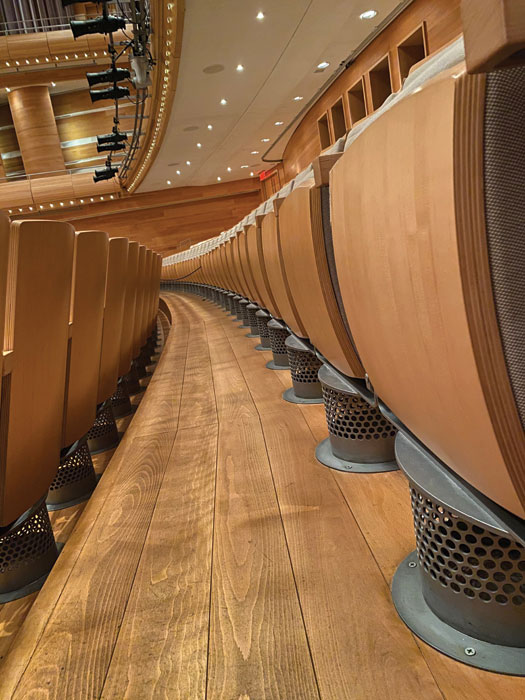 “Stories and anecdotal evidence would suggest that the flow of air does have an effect on transmission,” says Matthew Lella, principal at Diamond Schmitt Architects and the architect responsible for  the Maison Symphonique’s concert hall, facades and public spaces. “Perhaps the pandemic will result in more studies of the way air flow contributes to the spread of airborne diseases.” As far as systems currently on the market go, however, the Maison symphonique is in a good position.

Beyond ventilation, the hall will have to deal with the challenges facing any venue, including how to sustain audience confidence in the safety of the space. This is an issue that extends to “all scales and types of performances, and performance space,” Lella says. In an effort to comfort the concertgoing public, Place des Arts, like production agencies around the world, has reduced audience capacity and instituted a number of health and safety measures.

Organizations such as the MSO and the OM have responded accordingly. These organizations, having released season announcements in late August, have published protocols detailing measures to ensure the safety of listeners while they enter and exit, as well as socially distanced seating arrangements. Orchestras also will be more spread out, as was the MSO at its “Classical Flight” performance in August at a parking lot at Trudeau Airport, and the OM during its summertime Beethoven recording project in Bourgie Hall.

Changes in seating are sure to alter the experience of concertgoing. “Distanced orchestras and audiences are fundamentally contrary to the spirit of live performance,” Lella says. The intensity of the crowd and the intimacy that comes with close proximity will be lost.

The OM has also announced that it will be livestreaming concerts as of October, so as to reach a wider audience in spite of reduced hall capacity.

Lella speculates that there are a number of ways the design and construction of performance spaces could change as a result of the pandemic. It is likely, he says, that fronts of houses and backstage areas will be conceived of differently. The traditional opera box might see new use. Although originally conceived as a means of embedding social stratification within the architecture of a room, this kind of spatial organization could serve to keep social “ bubbles” separate.

In the meantime, as we wait to see how architecture and design adapt to the current situation, it has largely been left up to the artistic organizations that use these spaces to find ways to make live art a possibility. “There are all kinds of roadblocks, Lella points out. “Musicians all need to see the conductor and hear each other.”

Now and again you see instrumentalists move around the hall. However, usually the room is designed for sound to emanate from the stage. The challenge of how to overcome the constant reminders of our unusual circumstances in a context where your goal is to transport audiences is a great one.

“The concert hall as a space is a place that lends itself well to experimentation,” Lella says. Orchestras are  programming smaller events and performing works in reduced orchestrations. Whether plants in Madrid or plush toys in Paris, methods of sound absorption have been creative and varied.

Lella hopes the experiments continue. Although these practices represent radical changes, they need not be understood as compromises. “People are trying to overcome these physical and emotional hurdles, and it has been wonderful to see art live through this.”

And so we embark on a season of unknowns, one of trial and error, of small groups in large rooms and big sounds with reduced audiences. Fortunately, Montreal is a city of creativity and innovation, with a thirst to create and share artistic experiences – and a hall that seems up for the challenge.