At the Suoni per il popolo last week fans were treated to three installments of free jazz performed at the highest level by some senior stellar talents.

Free jazz is alive and well even after nearly 60 years. While many of its pioneers, the likes of Sun Ra, Ornette Coleman, Paul Bley, and Steve Lacy are no longer with us, some most notable practitioners are very much alive and well. Four of them came by recently at the Sala Rossa. Joe McPhee, 78 years old; Milford Graves, 76; Kahil El’Zabar, 64; David Murray, 63 – are all seasoned, mature musicians who improvised some powerful music.

The first of these, McPhee, was heard on Monday June 4 on both trumpet and sax in a trio rounded by two musicians of a younger generation, pedal steel guitarist Susan Alcorn and Ken Vandermark on tenor sax and clarinet. 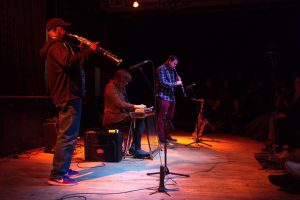 The trio soared from the get-go. Its music was actually very much in tune with the heart throb rhythms of The Buffalo Hat Singers, a Mohawk group performing a floor below the show staged at the Sala. In a previous workshop at a past Suoni Festival installment, McPhee stressed the importance of listening to your sonic environment when improvising. That evening he proved his point by playing energetic lines that were full of vitality and seemingly fed by the Indigenous drumming, first on trumpet then on soprano sax. Alcorn’s pedal steel playing brought in interesting sonorities in a nice subtle contrast to McPhee’s and Vandemark’s onslaught of sound.

The opening act was a unit called Eave comprised of locals Eric Hove (alto sax), Evan Tighe (drums) and former Montrealer and current New York resident Anna Webber (tenor sax and flute). A fourth member, guitarist Vikkie Mettler, who had joined them previously for a recording, was absent that evening. The trio presented a competent, if somewhat restrained, improvisational experience.

On Thursday night (June 7), percussionist extraordinaire Kahil El’Zabar and the forever creative and eclectic saxophonist David Murray arrived in town shortly before showtime, apparently after a long drive from Buffalo. Neither seemed to be the worse for wear, because they offered a high-octane set. El’Zabar played in his usual soulful, intuitive, trance-like style, moving from his full kit, to cajon, or kalimba for a couple of tunes, include a mesmerizing take on “Summertime.” Murray, for his part, was a fountain of inspired playing – effusive, with his soulful approach firmly grounded in free jazz, yet infused by a more lyrical mainstream jazz tradition given the familiar motifs and materials he used. But this was not just a blast from the past or museum music: The duo was also firmly grounded in contemporary grooves, with tinges of soul, R’n’B and hip hop. During the set El’Zabar pounded the cajon and sang: “You can be soulful and still be intellectual,” or: “Today’s generation thinks too much about themselves,” but should be “thinking about Ecology, Human regeneration” and “we need to take care of our babies.” The music was not just aesthetically envelope pushing free play—it was alive and kicking music, with immediate relevance. 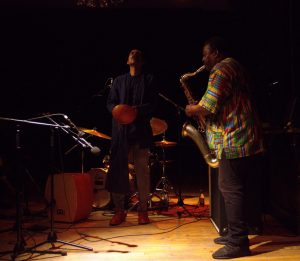 The opening band was Castor & Compagnie, a unit made up of several of Quebec’s Musique Actuelle seminal artists (Jean Derome, Joanne Hetu, Diane Labrosse, Pierre Tanguay and Pierre-Yves Martel). They performed a sequence of love poetry with fascinating sonic accompaniment in a very cohesive and convincing set of music that reflected Quebec’s freedom vein, linked to politics of language and identity, a kind of parallel to USA Free Jazz and its connection with the Civil Rights movement and “Freedom Now” imperative.

The third concert on June 10 featured the unstoppable and incredibly vigorous and expressive drummer Milford Graves, accompanied that night by William Parker, an omnipresent bassist on the creative music circuit. 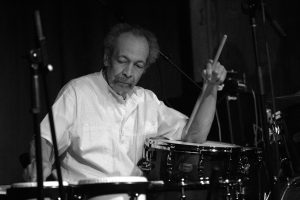 The duo presented a high voltage set of free jazz at its best – no holds barred creative momentum being the order of the night. Graves’ spare set (no cymbals…just a high-hat) included a huge kick drum, and snare elevated unusually high, a couple of toms and an extra hand drum which he hit with his right hand stick from time to time.

The rhythm wave was relentless, and the crowd in the packed room practically danced in their seats to the powerful sway of the music arising from the drums. Parker, for his part, throbbed along like a dynamo on double bass and African bass, while having some lyrical things to say on a nasal North African reed instrument.

Several local drummers were present in the audience that night, including the legendary Guy Thouin of the Quatuor de Jazz Libre du Québec. But the mighty music of Milford Graves is not a thing for drummers alone; it speaks to everyone.

Earlier that day Graves spoke after a screening of the documentary film about him titled Full Mantis, in which the musician’s interests in Martial Arts, gardening and the science of rhythm in the human body and its responses to music were presented. We also got a clear idea of the social context (America of the 1960s) that fostered free jazz, its aesthetic best summarized by a phrase repeated by Graves: “I’m going do what I want.”

The Graves/Parker set was aptly preceded by poet/trumpeter Jason Selman, who did not play enough trumpet for my taste and whose poetry, despite a lack of vivid imagery and word play, was nonetheless tastefully phrased and flawlessly delivered in a relaxed, intimate and sonorous voice. Selman is comfortable with an audience and can put out intimate expressions of feeling and thought in deep, touching and direct ways. And as an opener for the great Milford Graves, his messages of self-awareness and the power of love, were just the right thing!