You are at:Home»Arts Industry»Orchard 2.0 – High-Tech Chekhov, plus Baryshnikov
Advertisement / Publicité

REVIEW: of The Orchard, at the Baryshnikov Arts Center in New York City, running through July 3 (viewed June 19, 2022).

A governess’ headless cyber-dog scampers across a stage carpeted in eerie blue leaves. Impossibly sheer, nearly undetectable scrims facilitate spectral, sometimes cosmic images that seem to materialize out of thin air. A lithe, twelve-foot robotic appendage dominates the playing area, swiveling about, training its ring light on a scatter of household artifacts, as though surveying the remains of the day. 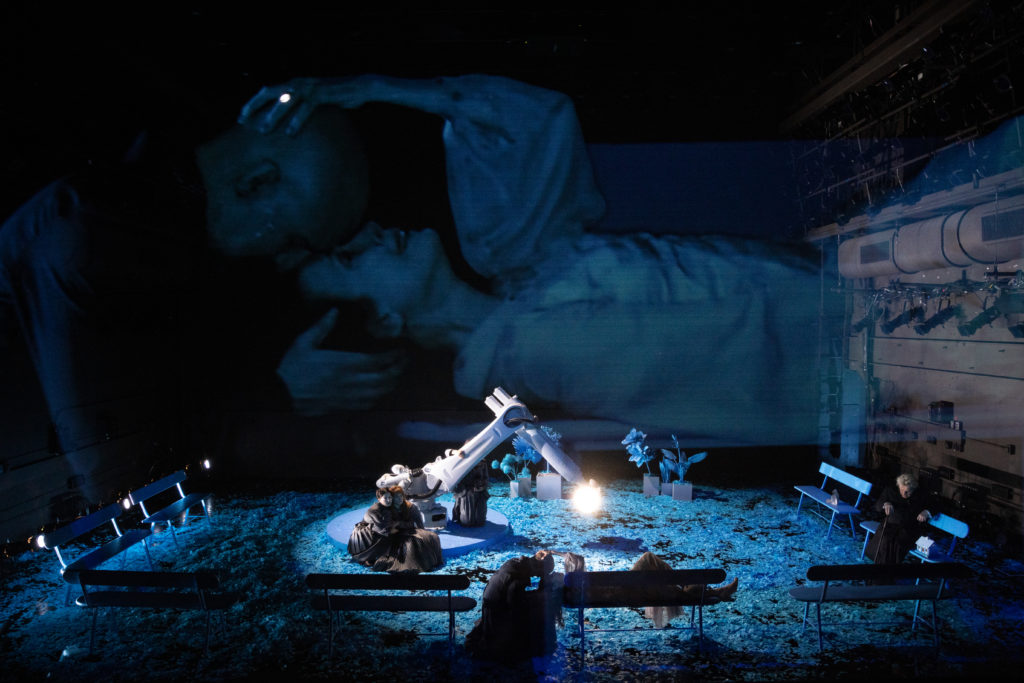 It is within this surreal environment that director Igor Golyak has placed his adaptation of Anton Chekhov’s 1904 play, The Cherry Orchard, and it’s a bold theatrical bid that pays off handsomely.

In his final masterpiece, Chekhov limned the portrait of a formerly aristocratic family caught up in ineluctable personal and societal transition. The spendthrift matriarch, Madame Ranevskaya, returns to her ancestral estate in the Russian provinces after years of living beyond her means in Paris. In the ensuing action – amidst tears, laughter, romantic misadventures and bouts of insomnia – Ranevskaya and her household face the dawning realization that both their home and its long-cherished privilege must inevitably be surrendered in the rise of Russia’s coming new social and economic dispensations.

Dubbed simply The Orchard, Igor Golyak’s revision of Chekhov’s original excises certain subplots and subsidiary characters, but admirably retains a distinctively Chekhovian flavor in closely observed quirks of character, an improvisatory air of adventitious domesticity, and a bittersweet appreciation for the interpenetration of human fragility and resilience. The charm and idiosyncrasy of Chekhov’s tonalities, his knack for ringing changes from comedy to threnody and back again, suffuse the production. 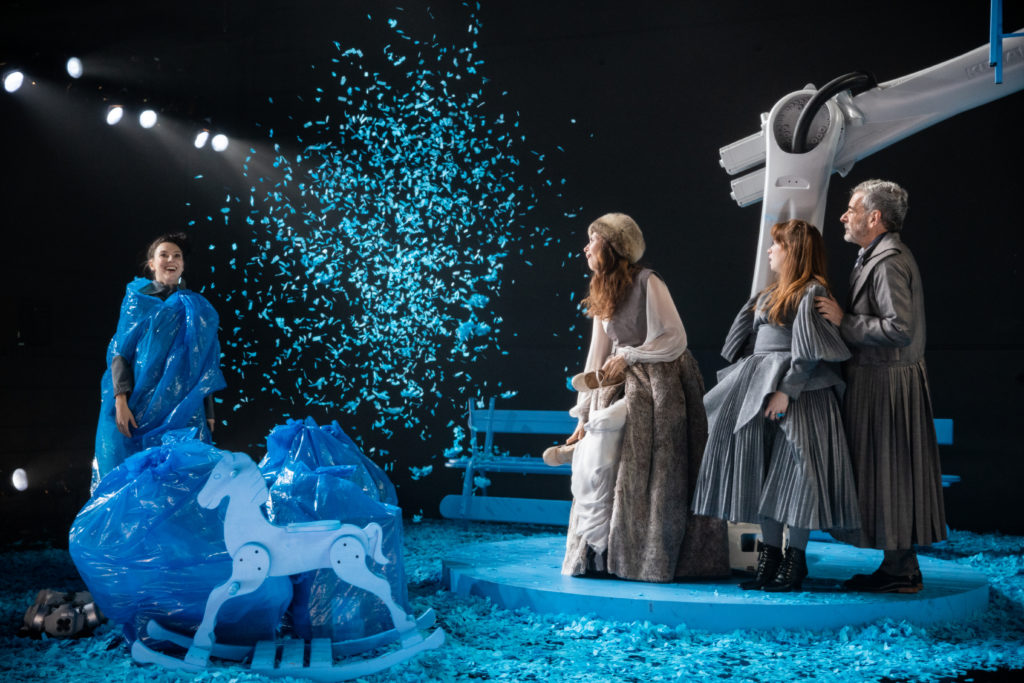 But Golyak’s happiest inspiration is to frame all that Chekhovian authenticity within the aforementioned welter of technology, robotics and multi-media device. It’s all strangely beautiful, not to mention serviceable (that robotic arm even performs tasks ranging from preparing coffee to sweeping up debris). But it’s also suggestive of unpredictable and displacing futurity. Golyak thus creates a condign contemporary metaphor for the kind of inchoate social anxieties that haunted the world of the play’s original time and place. 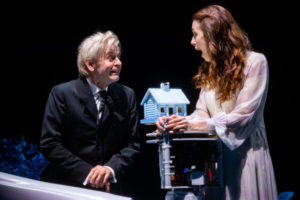 The text is well and warmly presented by a uniformly effective ensemble cast. Jessica Hecht plays a more youthful Ranevskaya than is customary, bringing a light and tremulous vulnerability to a role often played in more domineering tones (notably, it was originated by Chekhov’s own wife, Olga Knipper).

Mark Nelson, in the role of Ranevskaya’s brother, Gaev (originated by none less than Stanislavsky), is charming and affecting in his numerous turns of sentimental and rhetorical bluster.

Juliet Brett is pert and lively as Ranevskaya’s daughter Anya, while Elise Kibler plays her more serious and sober-minded sister, Varya, with precisely the requisite nuance of yearning melancholy.

Nael Nacer executes the complex role of Lopakhin – the family’s dual advocate and antagonist – with a brio belying the character’s peasant awkwardness; while the role of the student Trofimov, here refigured as a hearing-deprived person, is beautifully executed by John McGinty entirely in American Sign Language.

Darya Denisova brings a delightfully offbeat vaudeville energy to the role of the eccentric governess, Charlotta.

And, in a richly enhanced cameo as the ancient family servant, Firs, Mikhail Baryshnikov is both physically eloquent and textually poignant, providing moving gravitas in a role that grounds the drama’s present-tense in a deeper and darker historical matrix.

Finally, the sinister, blackshirted Passerby, representing the spirit of social upheaval and class inversion on the horizon, is played by Ilia Volok in harrowing and roiling Russian. 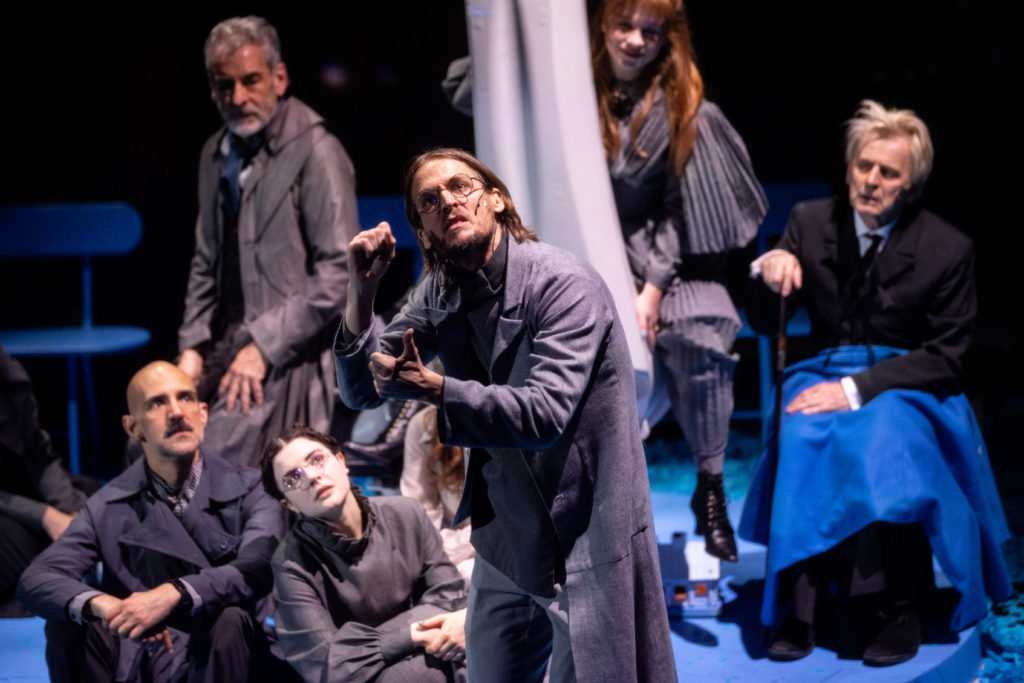 Scenic and lighting designs by, respectively, Anna Fedorova and Yuki Nakase Link, are thrilling; while costumes by Dana Botez and hair and makeup by Anna Hrustaleva are effectively evocative while eschewing period literalness.

The robotics featured in the production originated with Germany-based, Chinese-owned KUKA AG.

The Orchard may be experienced conventionally as a live theater event or virtually online.  The production runs through Sunday, July 3, 2022.

The Baryshnikov Arts Center is located at 450 West 37th Street in New York City. More information about and tickets for The Orchard are available at:  www.theorchardoffbroadway.com