“The Great Wheel of Puerto Rican confusion spins on!”

So declaims one of the characters in playwright Mara Vélez Meléndez’s capaciously titled new theater piece, Notes on Killing Seven Oversight, Management and Economic Stability Board Members, now playing at the Soho Rep. It’s a tag line that aptly summarizes the dizzying action and ambitious collision of themes that Meléndez sets in motion for this provocative hour-and-three-quarters of theatrical razzle dazzle.

The work ostensibly began with Meléndez – a Puerto Rico-born dramatist – grappling with a challenge to adapt and update a late-career play by Henrik Ibsen – John Gabriel Borkmam – for a contemporary audience.

Ibsen’s work is a dark brew of illicit financial dealings, damaged reputations and intergenerational guilt. And while the result of Meléndez’s encounter with it may not ring much surface resonance with the original, her freewheeling departure nonetheless manages to bend several of Ibsen’s subterranean dramatic anxieties back onto her own complex concerns with gender fluidity and Puerto Rican political self-identity. 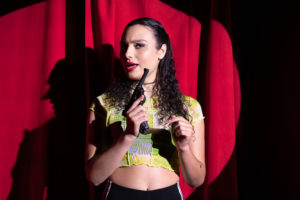 The evening begins with a fore-curtain monologue by the play’s pistol-toting protagonist, Lolita (Christine Carmela), who confides in richly insinuating prose her inherited resentments over the treatment of her native Puerto Rico through the centuries. Figuring herself as a self-sanctified avenging angel, Lolita has resolved (abetted by her father’s gun) to mow down the seven-member board of PROMESA – a coterie of magnates appointed by the US Government in 2016 to manage the finances of the newly-bankrupt Isla Bonita.

Both Lolita’s transgressive plan of action as well as the character’s name might well recall the exploits of the actual Lolita Lebrón who, in 1954, managed to infiltrate the US House of Representatives, opened fire and seriously wounded five congresspersons. Expectations are thus primed for some sort of dark political thriller to come; but Meléndez has surprises of a very different stripe in store.

Arriving at PROMESA’s New York City offices, Lolita encounters the Receptionist (Samora la Perdida) – a Bronx Born Nuyorican who moonlights as a drag performer. After an initial tense face off, in the wake of which Lolita’s resolve is shattered, the two characters arrive at a collaborative entente.

The ensuing action of the play revolves around the Receptionist sequentially retiring from the scene only to return in ever-more elaborately costumed and choreographed drag-fantasy versions of each PROMESA board member in turn. These image projections are all ostentatiously candid and self-implicating, confessing their sins and inviting reprisal, practically begging Lolita to muster the fortitude to finish them off. It’s high camp of a deadly serious variety. 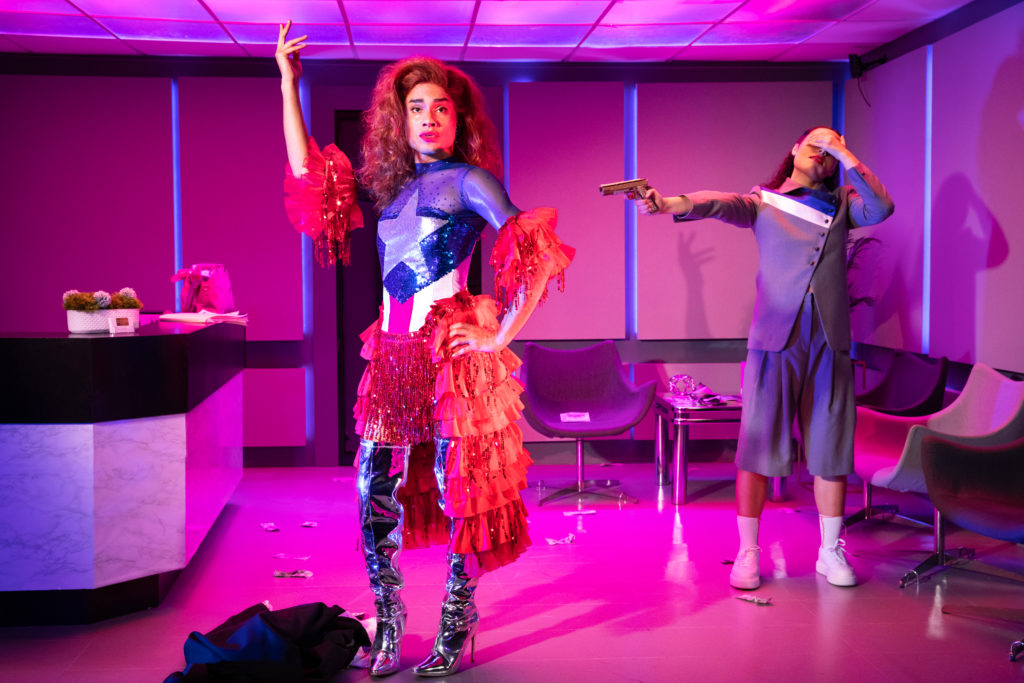 On one level, as PROMESA actually is an existent and duly constituted quasi-governmental organ, the staging of even its imaginary extermination might arguably be viewed as verging on criminality. But, cloaked in a carapace of flamboyant and absurdist theatrical gesturation, and with the precise relationship between Lolita and the Receptionist left ambiguous (is this all a mere fever dream borne of Lolita’s conflicted memories of her father’s activism?) the performance is shielded from imputations of literalness.

Certain structural and thematic quibbles might be leveled at Meléndez’s work. Problematics of individual gender fluidity are conflated with the questions of overall Puerto Rican “national” identity – but is the relationship asserted as metaphor? Allegory? Or as some more concrete sociological correspondence? An audience need not expect clear resolution, but may be warranted in sensing that the ideational layering yields a texture a bit thicker than can be chewed.

Some flashy pop culture tropes, such as a send-up of a geriatric Dolly Parton or a riff on Tyra Banks, seem largely irrelevant, while a relative paucity of germane Boricuan history or cultural material could probably be rectified easily enough.

Finally, one wishes some more economical reduction of the wait times between the appearances of the various drag fantasy characters could be innovated (though, admittedly, the elaborate and impressive costume changes involved are obviously no mean feat). 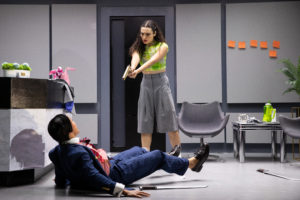 The two performers are exemplary. Christine Carmela as Lolita admirably maintains the requisite quantum of psychic tension throughout; while Samora la Perdida as the Receptionist is a prodigy – flamboyant, athletic, garish, virtuosic, over-the-top, and seemingly indefatigable, her/their performance is an utterly eye-popping series of star turns.

Direction and costume design by David Mendizábal; scenic design by Gerardo Díax Sánchez; lighting design by Kate McGee; sound design by Sadah Espii Proctor; and the work of the rest of a resourceful technical and design team all warrant kudos.

Notes on Killing Seven Oversight, Management and Economic Stability Board Members continues at Soho Rep through Sunday, June 19.  Further information and tickets can be accessed at www.sohorep.org.