Valérie Milot defines herself as a musician first and a harpist second. At age 31, she is nothing less than the most visible and active ambassador of the harp that Quebec has seen in recent history. She is the soloist-in-residence for Montreal’s Orchestre Métropolitain for the 2016–17 season.

Music is important in the Milot family. They even play it together.

“My father was a great lover of classical music,” she says. “He played several instruments, including classical guitar. We, his three children, took introductory music classes before we even went to school. It was part of our family life: we formed a recorder quartet together. For my father, a hard-working surgeon, it was a way of spending time with us and relaxing. It was a special time with my family, and I also went to a school with a concentration in music.”

After a few years of piano, around age 10, she felt the urge to try a new instrument.

“We went to see the Orchestre Symphonique de Trois-Rivières as a family, and every year we went to see The Nutcracker in Montreal. So I had already seen and heard the harp. I asked my parents if I could try this instrument. My father loved Mozart, and one of his favourite works is Mozart’s Concerto for flute and harp, so he was pretty in favour of the idea. We went to a concert with a harp ensemble and that confirmed my interest.”

At first, the very romantic image of the harp attracted the little girl. This perception changed as Milot became an accomplished harpist. 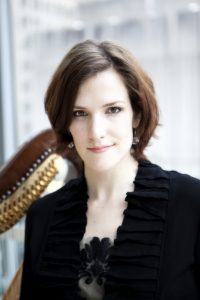 “My relationship with the harp changed. I had Caroline Lizotte as a teacher, a very original person who boldly does all kinds of things with her instrument. It really spoke to me. When you choose the harp, you love it for its originality in the beginning. But as I developed as a musician, I wanted to show what the harp represented for me. As I got older, it was more the instrument’s strength that captivated me. I liked to destroy the clichés associated with the harp. So what attracted me at first was no longer what I wanted to emphasize.

Milot has devoted herself extensively to exploring her instrument’s solo repertoire.

“In this way I could search for sounds and tones that I liked,” she says. “I believe that it requires many years to become truly at ease with the harp. I always felt that it was an instrument that allowed me to be very close, very united with it, and I appreciate this intimate side. The more I play solo and chamber music, the more I become acquainted with the harp and the more I benefit from a certain visibility as an artist, and the more I feel like I’ve accomplished a mission. If I can inspire other young people to try the harp, I’ll be very happy.”

It’s true that orchestras in Quebec and in Canada more broadly rarely put harp concertos on their program. “When they do it, it’s never more than once per season, and they rarely do it two years in a row.”

The 2016–17 season, however, will be the exception. The Orchestre Métropolitain has programmed two harp concertos, including that of Glière and that of Nino Rota, two works rarely heard in Montreal.

“The harp is not blessed with great visibility. With time, I began to see myself more as a musician than as a harpist. No matter what instrument you play, I think you need to be able to go beyond that instrument and develop your own personality. You can’t define yourself uniquely by your instrument,” says Milot.

This collaboration with the OM no doubt marks an important step in her career. “I’m very pleased to have the opportunity to play with Yannick Nézet-Séguin. He’s a conductor whom I find incredible to watch and to listen to, because there’s an absolute vitality that emanates from him. There are artists whose presence can be felt the moment they step on stage. Beyond his musical qualities, this is the first thing that struck me about him. I’ve long dreamed of playing with him. When they called to offer me the position of artist-in-residence, I was very touched, and it represents an opportunity to bring a greater awareness of the harp.”

Valérie Milot performs from under a dome onto which lights and images are projected as part of the Orbis concert, Photo: Amélie Fortin

Since 2009, Milot has recorded seven albums with Analekta, allowing her to touch on a highly varied repertoire, including Christmas music and popular music, with an album in homage to Simon & Garfunkel.

Her latest album, Orbis, dives into the world of living composers, such as Steve Reich and Canadian Marjan Mozetich, and those recently deceased, like Frank Zappa. There’s even a piece by prog-rock band Gentle Giant. The Orbis project is also an immersive multimedia show with an avant-garde concept, for which a first draft was presented in Montreal last May. For part of the performance, the musician played under a dome, with motion sensors attached to her arms and her instrument. Changing images influenced by her movements and by the music were projected on the dome. Soundtracks accompanied her.

“The concept for the Orbis show came into my mind before the idea for the album,” says Milot. “I hold with the tradition of classical music, but I wanted to have a concert in my musical projects in which I could go as far as possible. Beyond classical music, I have always been attracted to the very visual aspects of certain shows, like those by Robert Lepage or Peter Gabriel for example. It’s something that’s rarely seen in classical music. I said to myself, we could take advantage of this as part of a concert in a relevant context. That’s why I chose a contemporary repertoire for Orbis. It’s more coherent. The idea was to create an atmosphere where everything could be constructed or deconstructed around the harp.

The first performance of Orbis, in Montreal, will have served as a laboratory.

“These are new technologies for me. It allows us to test the audience reaction. Over the course of the next year, we’ll rework the show. There will be major changes, but the basic idea stays the same. In relistening to the recording, I have a progressively clearer idea of what I want. I want to make it even more immersive. The show lasts 60 minutes. I want people to feel like they’ve been taken by the hand from the very beginning and arrive at the end with the impression that they haven’t noticed time passing. This project demands a lot of my time, but I’m very motivated. The tour begins in June 2017.”

To finance her project, Milot has launched a crowdfunding campaign on Indiegogo and has raised a little over $10,000, which represents only a small part of the show’s budget, with less than a year left until the tour begins.

“Orbis is also the fruit of some reflection I did with my international agent. It’s not easy to sell a solo harp. We thought that it would be pertinent to imagine some sort of vehicle, some pretext to create some buzz around me and open new avenues. This staging arouses a lot of curiosity. With this show, I’m offering a sort of redefinition of the classical concert, which could open a lot of doors to the next thing for me.”

Summary of a Brilliant Trajectory