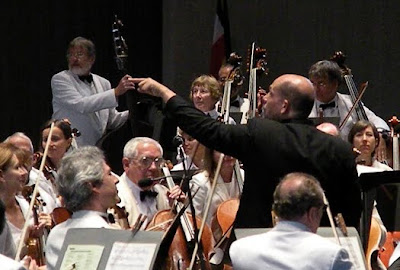 Mendelssohn: Violin Concerto
Shostakovich: Symphony No. 8
Nicola Benedetti, violin
Dallas Symphony Orchestra/Jaap van Zweden
Jaap van Zweden took most of the summer off to nurse a sore shoulder. The recuperation seems to have been successful and he is back in town leading the Dallas Symphony Orchestra (DSO) with even more energy than before. Among his specialties are the symphonies of Bruckner and Mahler and Shostakovich is not far behind. Last season in Dallas he conducted a stunning performance of the Symphony No. 7 and this season he followed it up with an equally fine reading of the Eighth Symphony.
Benedetti’s Mendelssohn a Tad off Track
This evening’s concert program opened with a perennial favourite, Mendelssohn’s Violin Concerto in E minor. To give it some new life, we had a vivacious young British violinist of Italian heritage, Nicola Benedetti. She brought to the stage not only an attractive appearance, but a solid technique and a ravishing tone that carried well over the orchestra. Van Zweden made sure that the DSO provided a discreet accompaniment, and only let loose in the tuttis.

Benedetti is certainly a young artist to watch, although she might want to reconsider her role vis à vis that of the orchestra. The last movement of this performance of the Mendelssohn was more than a bit scrappy as the strings and winds tried to match Benedetti’s tempo. Listening to the orchestra as much as it listened to her would have worked to Benedetti’s benefit here.

Although the Shostakovich Symphony No. 8 is played far less often than many of the other Shostakovich symphonies, it is quite familiar to Dallas musicians and audiences. Andrew Litton recorded the piece with the DSO in 1997. Taking up where his predecessor left off, van Zweden has the DSO playing at a higher level than could have been imagined during the Litton era and that new standard makes nearly every concert a joy to hear.

The Eighth Symphony is a long, sprawling piece that can easily descend into annoying bombast alternating with egocentric navel-gazing. Shostakovich was very much a man of his time – the worst of the Soviet era – and it could be argued that the music loses much of its power without the historical context. That was certainly not the case with this performance. Maestro van Zweden maintained focus from beginning to end, and in so doing probably convinced many listeners that this was music not just for its own time, but for all time.

In spite of attempts to describe this and many other symphonies in programmatic terms, it seems to me that most great symphonies stand or fall by their musical quality, not by the events which inspired them or the stories they purport to tell.

The long first movement is an excellent example of

There are two scherzos, structured after models provided by Mahler. The second of them is rhythmically infectious and contains an unprecedented workout for the trombones, and great fun too in the section with the trumpet solo that could have been taken from the repertoire of a circus band.

The fourth movement is one of the great passacaglias in symphonic music, right up there with the finale of Brahms’ Fourth Symphony. In this performance, basses and cellos repeated the theme over and over with extraordinary accuracy of intonation and with beautiful tone and mesmerizing phrasing.

In the last movement, the music becomes deeply personal and probing. In her excellent notes in the DSO programme book,

Laurie Shulman expressed the feeling of this movement perfectly: “These [instrumental]soloists come across as voices, a manifestation of Shostakovich’s faith in the indomitability of the individual human spirit.”

In these solos, the members of the DSO outdid themselves with the most refined and beautiful playing.

In the composition’s final pages, van Zweden worked miracles with sustained soft playing. The conductor appeared to be doing nothing at all to achieve such finely-honed dynamics; but make no mistake – this kind of musical perfection comes only after the most demanding rehearsals.

DSO Quest for New Concertmaster Continues
The Dallas Symphony Orchestra (DSO) is currently between concertmasters – long-time leader Emanuel Borok retired last season and a new person has yet to be appointed – but a variety of guest concertmasters have been doing excellent work.
William Preucil (Cleveland Orchestra) and Andres Cardenes (Pittsburg Symphony) have already appeared this season.

Guest concertmaster for this performance was

Nathan Olson, a protégée of Cleveland Orchestra concertmaster William Preucil. Olson may be a little young and inexperienced to lead the DSO but it all depends on how he relates to the players and to conductor van Zweden. Some exceptional young violinists have leadership as well as virtuosity in their veins; Olson may be one of them. We shall see.

Coming later in the season are more guest concertmasters including

The process of finding the right concertmaster is certainly interesting and cannot help but create an exciting, season-long guessing game for concert-goers in Dallas.

Paul E. Robinson is the author of Herbert von Karajan: the Maestro as Superstar, and Sir Georg Solti: His Life and Music. NEW for friends: The Art of the Conductor podcast, “Classical Airs.”
Photo by Marita