In the same week that the New York Festival of Song (NYFOS) presented a contemporary art song program entitled “Christopher Cerrone & Friends” at National Sawdust (viewed December 8, 2016), Bob Dylan was awarded the Nobel Prize. The legitimacy of granting the prize to a singer-songwriter received the public auditing the Royal Swedish Academy of Sciences anticipated, but also produced an opportune moment to shine a spotlight on the art of song.

As part of his acceptance speech, Bob Dylan stated, “Not once have I ever had the time to ask myself, ‘Are my songs literature?’” Dylan’s response politely rebuked a question that the choruses of dissenters were trying to solve: that is, “Is it Literature?” Wrong question. The Nobel Prize was not awarded to Dylan simply for his words, nor for his music – but to the interval between words and music – an ephemeral place, which defies dictionary meaning but when conjugated by masterful hands becomes the meeting place for a “genius,” such as a Nobel laureate, to anchor their talents.

In a 2016 article for the New York Times, producer/songwriter Pharrell Williams summarized this place best: “When it seems seamless – when you can’t really pull the steps apart, and it just sounds like one thing? That’s when it’s genius.” The search for this “one thing” genius – the nexus where the mutual influence of music and text conspire, this seeming seamlessness – is the Holy Grail for art song writers, from centuries before Schubert’s hundreds of settings of Goethe to the men and women presenting for NYFOS. These next-frontier composers are blazing paths ­– listening to text differently but with ears that have learnt well from their historical masters. The classical art song pays less respect for popular music’s orthodox treatment of chorus and verse or ABA forms that keep us hooked. Instead, the compositional response seeks the “one thing” dialogue with text that carries an arsenal of less predictable, sometimes left-of-center, approaches. 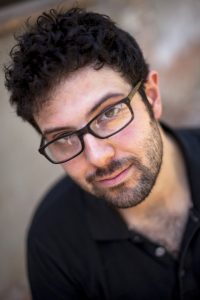 The Brooklyn-based composer and Pulitzer Prize finalist Christopher Cerrone invited us to his lounge room of exceptional artists. Cerrone has very good taste in musical friends. Bringing the texts of our time, each of the evening’s offering accomplished its intended mission. Erin Gee’s architecturally deft and playful score of sounds, words, whispers, murmurs, and splutters in her excerpts from Mouthpiece echoed Berio’s steps and Fluxus trends but broke free with a visceral rhythmic ostinato. Ted Hearne’s sophisticated language of indie vocals and pastoral Aaron Copland-esque prairie horizon gave Dorothea Lasky’s pertinent poems (Jakob, You are not dead and Why go in cars) a life of classical beauty, urbanity, and contemporary heart.

Cerrone revealed that his judicious choices of economy in orchestration (voice, prepared piano, vibraphone, and guitar) and minimal note selection proved the successful landscape to foreground the lush syntax of G.C. Waldrep’s Apocatastasis. The precocious talents of Katherine Balch transported one fragment of text by Michelangelo to an engaging narrative of complex intrigue that was realized with the virtuosity of soprano Justine Aronson and bassist Patrick Swoboda. In a night where songs registered with the audience with both heart and mind, a grand bouquet must fly to the mercurial artistry of Aronson, who swept us to new heights with the daring of a trapeze artist. The program of recently-composed art songs, in these right hands, made us listen to music and text a little differently.