Conductor Janna Sailor gave this speech at the Coalition for Music Education Youth4Music Leadership Symposium in Vancouver on April 1, 2017.

My name is Janna Sailor, and I am the founder and artistic director of the Allegra Chamber Orchestra, an all-female ensemble dedicated to empowering women and their communities through music.   I am also a violinist performing with several orchestras in town, including the Vancouver Opera Orchestra, in addition to my own solo and chamber projects. This does not leave much free time, to say the least.

Music has had a profound and transformative impact on me, and I truly love my life and what I do. But it wasn’t always this way. I grew up in a town of 300 people in rural Saskatchewan. Elbow, Sask., to be precise, not far from Eyebrow, Sask. Google it. They exist!

As I was growing up, music was a part of my everyday routine, just like brushing my teeth. My mom was a piano teacher and music lessons for me and my two siblings were mandatory. I remember, as a three-year-old, trudging off in my snow boots to violin lessons. This wasn’t my idea of a good time! As a matter of fact, it wasn’t until many years later that I realized the true power of music, my calling to create it and how it would become a tool for transformation in my life.

A Place of Solace

Growing up I was painfully shy. I didn’t have any friends. I rarely spoke up. I found each day at school to be truly terrifying. You see, despite the picture-perfect appearance to an outsider looking in, our family was anything but.

I was physically and sexually abused throughout my childhood.

However, over the course of my confusing and tumultuous daily life, practice time on the violin went from being a daily chore to a place of solace, relief and escape. Music became my voice when I literally didn’t have one.

At the age of 13, I was accepted into a youth orchestra, which quickly became a place of belonging, self-expression and safety. As a troubled and bullied teen, I dropped out of high school and never returned. Orchestra rehearsal was truly the only place where I felt accepted, happy and at home.

The orchestra around me brought a tremendous sense of freedom, joy and a sense of my own personal power in contributing to it. Despite the early mornings and the hour-and-a-half commute each way to rehearsal, I loved and lived for every minute of it.

However, the family business was struggling. I was determined to continue my studies, so I took jobs cleaning houses and rooms at a local motel. Since I wasn’t in school, at 13 I was working full time. I would return home exhausted from a full day of cleaning jobs, but I could not wait to spend time with my violin. I would then practice until the wee hours of the morning. I did this for years.

People warned me that not being in school would limit my career opportunities and my future. In a small town, it felt like there was no escaping the cycle of poverty and dysfunction.

But somehow, deep down, I knew that music was my way out of my circumstances as an abused, depressed and suicidal teen. Day-to-day struggles and turmoil were so prevalent in my life, the future didn’t seem very promising.

Then one day at 16, I decided to tag along with a friend who was taking a road trip to audition for a music school. I took a lesson with the head of the violin faculty, which ended up being an informal audition. That day, I was accepted to their performance program.

My life changed drastically in an instant. After three years of cleaning houses, I found myself with a full scholarship at a music school, despite not having a high-school diploma.

To me, this was a miracle. Music had taken me out of a troubled and unhealthy situation and created time, space and resources for me to flourish and begin the process of emerging as the person and musician I was supposed to be.

I was creating music every day and, for the most part, I was free from the constant dysfunction of my home life. To me, university, (even cafeteria food) was heaven.

It wasn’t easy though. I hadn’t been in school for a long time. And, as a scholarship student, I had to maintain a 3.9 GPA. The gaps in my education showed. It felt like I always had to study twice as hard as everyone else to keep up. After four years, I finally graduated at 20. 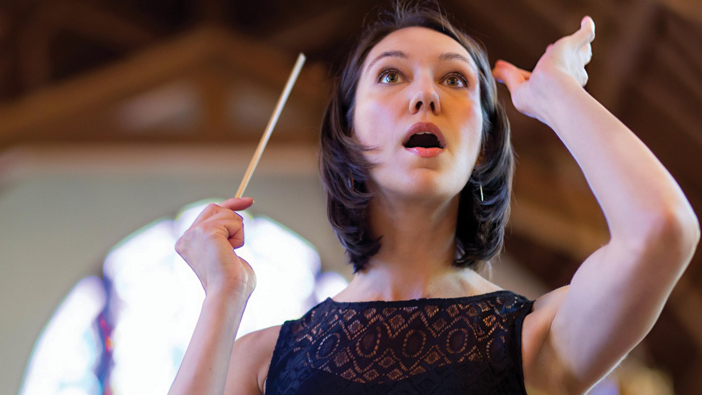 However, the long hours of practicing for numerous competitions and auditions had resulted in significant nerve damage, and by the time I graduated, I could no longer play. The one thing that I relied upon and kept me going, I could no longer do. And unfortunately, the patterns of my childhood followed me into adulthood.

With no way of supporting myself, I married right out of school and straight into a dysfunctional, controlling and abusive relationship. I was right back where I had begun.

It took years to heal my body, and to relearn how to play the violin from scratch. Despite the progress in my playing, my marriage had become increasingly unbearable and dangerous. After my life was threatened several times, I finally left. I took my violin, my favourite gown and my orchestra clothes.

I didn’t have any money, or a place to live. Music was the only thing I had. Once again, it was my way out of a hellish situation.

Over the next few years, I played countless concerts wearing that gown, continued my education at grad school, began playing with several orchestras and rebuilt my life. Once again, I felt free, powerful and happy, making music each and every day.

Music gave me confidence that I didn’t know I had. It empowered me to overcome circumstances that overwhelmed and limited me. I discovered that, in creating music, I had the opportunity to glimpse my strength and overcome my perceived obstacles.

Some of the most profoundly moving music has been created, not out of ease, but of struggle, pain and a desire to uncover and understand the inner workings of being human. Music showed me the best, the worst, the most tender, compassionate and vulnerable aspects of myself. It is a mysterious and powerful force.

The impact of music on our lives cannot be underestimated. Music education and access to it deserves our protection, advocacy and a place of honour and respect in our society. The influence of teachers, mentors and youth orchestra conductors in my life was profoundly life-changing,

The skills and perseverance that I learned in the practice room and onstage served me well in other areas of my life. When we educate others in music, we are teaching not only an art form, but another way of being, interacting and consciously creating the world around us.

Music in turn, teaches us more about ourselves and others. As musicians, leaders, teachers, it is up to us to create, inspire and share music in a way that its transformative power can truly be realized and experienced.

My life circumstances – though less than ideal – set me on the path of dedicating my career to music and, in its service, to creating opportunities for others to experience its power. This was my motivation for starting an orchestra with a social-action mandate: women empowering other women through music. 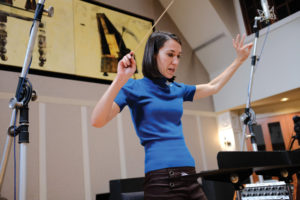 Allegra has participated in the founding of a music-therapy program at the WISH Drop-in Centre for women on Vancouver’s Downtown Eastside through a partnership with Music Heals. Since its formation eight months ago, the orchestra has performed in nine events, all expressing a social-action mandate, with many more coming. The orchestra has been featured in several documentaries, radio programs in four countries and reviewed in numerous magazines and online publications.

There is truly an appetite for music, contribution and change. The creation of Allegra was part of my personal mandate to empower and improve the lives of women and children who struggle and have experienced circumstances similar to my own. Music is a universal and multifaceted force that brings with it healing and far-reaching capabilities that transcend language, culture, social status, gender and religious barriers, among others. It is the ideal vehicle for social transformation, meaningful communication and impactful change.

I would like to end with the words of Michael Gilbert, the former concertmaster of the New York Philharmonic. I spent a beautiful afternoon with him in his Manhattan apartment going through scores and listening to his stories of working with legendary conductors over the years. As I was leaving, he said to me, “Your job on the podium is not to criticize the orchestra or dictate what they are to do. It is your job, as a leader, to make them powerful and to love music and each other.”

For more information on Janna Sailor, go to www.jannasailor.com.