Ex-Montrealer Rufus Wainwright’s controversial opera Prima Donna finally made its Montreal premiere on July 2, 2016 for a two-night run as part of the Montreal International Jazz Festival, years after its 2009 premiere in Manchester and its Canadian premiere at the 2010 Luminato Festival in Toronto (read Joseph So’s review). The drama behind the commissioning and staging of Prima Donna, including a missed opportunity by the Opéra de Montréal, appeared in the latest issue of La Scena Musicale (read the June cover interview by Caroline Rodgers).

While there is much to like about Prima Donna, the one-hour concert version presented at Salle Wilfrid-Pelletier also had much wanting. First, a lack of surtitles marred the understanding of the text, even though the libretto is in French, the predominant language of the home-town audience. After the overture, the first aria of the maid sung superbly by American soprano Kathryn Guthrie was unintelligible. Same for half of the lines sung by Quebec soprano Lyne Fortin who took on the lead role of Régine Saint-Laurent and Quebec tenor Antonio Figueroa who sang André, the journalist, her love interest.

Prima Donna is about one day in the life of a retired opera diva contemplating a comeback after six years away from the stage. The condensed concert version came illustrated with a silent film by Italian artist and director Francesco Vezzoli, which took kitsch to a new level, alternating images of Maria Callas with footage of American artist Cindy Sherman portraying Régine Saint-Laurent. 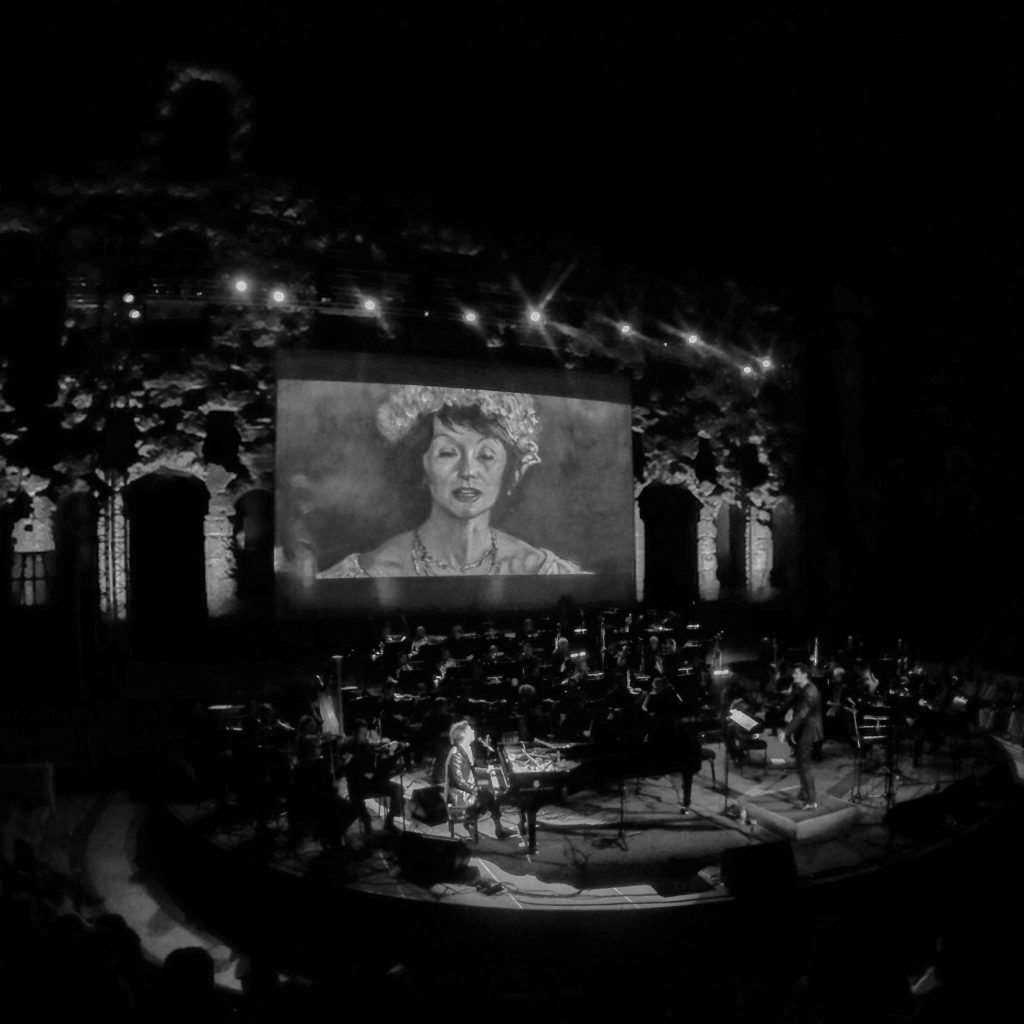 Wainwright stated that Prima Donna was partly inspired by Maria Callas’s tragic comeback story, but the narrative was not about her. However, the reliance on images of Callas was overdone. The obsessive panning of a piano with framed pictures of Callas seemed to suggest that we were looking at her piano. So, was the drama about Callas or a diva obsessed by Callas? This was never clarified, and after 30 minutes the images became a distraction to the actual singing.

Musically, there were some interesting moments. The opening overture was imbued with tonality, yet there was an inexplicable moment of dissonance that crept in midway. The maid’s opening aria gave welcome tones which floated above the orchestra, but the aria ended with strident pinched high notes that detracted from the opening lines. Similarly, André’s lines were forgettable and on occasion sat too high, making Figueroa sound like a countertenor. I was expecting or hoping for some memorable arias or duets, given Wainwright’s perchance for popular song, but I had to wait until the end.

The diva’s lines fared better, leading to the final aria “Les feux d’artifice” (Fireworks), the only memorable and touching part of the opera, which sat in the middle voice, and wonderfully performed by Fortin. It is really the only song that can stand on its own and sung in concert, which Wainwright did to great effect in the second half of the evening.

Wainwright proudly claimed credit for the orchestration, and rightfully so. He got tenderness out of the strings, winds, and brass of the pickup orchestra led by Jayce Ogren. Unfortunately, his attempts to be modern resulted in a perplexing score interjected with dissonance. At times, I felt as if I were listening to a horror movie and others, with an invasive percussive beat, a military march. Even leading up to “Les feux d’artifice,” the music sounded like a mess.

Opera is an odd sell for the Montreal Jazz Festival, and consequently Wainwright came out before the show to assure the 2/3rd capacity crowd that he will return after intermission to perform his standards. Packaging the highlights of the opera in the 60-minute concert version with another 60-minute set of his singing was effective, as the second half was lively and entertaining. There were many gems including “A Woman’s Face” from his new album Take All My Loves: 9 Shakespeare Sonnets, which would fit in well in any art song recital.