The road to the Metropolitan Opera stage can take many twists and turns, as in the case of Canadian tenor Richard Margison. At 47, Margison has now become the Metropolitan Opera’s tenor of choice for the lirico-spinto repertoire. The key to his success has been careful progress backed by fierce determination, fine motivation for any young musician. 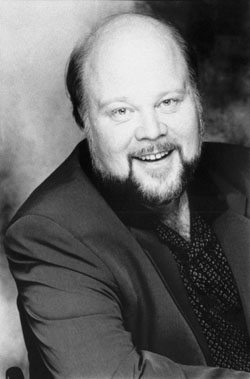 Adopted when he was one week old into a musical family (a request of his birth mother), Margison credits Canada’s choral tradition for his early involvement in music. His father was a violist with the Victoria Symphony and his mother is a piano teacher. As a rebellious youth, he took up folk and rock singing and played guitar for ten years in smoke-filled clubs. At age 22, he started studying with Selena James at the University of Victoria. She told him to choose between popular music and opera.

“His first teacher, Mrs. Kyle, had already given him a good foundation in breathing,” said James. “I heard a ring that could be cultivated to produce an opera singer.” Not everyone agreed at the time. After one year of general musical studies, Margison auditioned to be a performance major but was rejected by the jury. “I think very definitely that it was a sore point,” reflected Margison with a hint of resignation, “and it filled me with a sense of determination to prove something and to dig my heels in and make a career. Coming from a popular music background, people could not hear an operatic potential. They saw more or less a folk singer. My teacher had great faith in me.” James soon left to teach at the Victoria Conservatory of Music, and Margison continued his vocal studies there.

What did James see in Margison? “Richard had a broad chest, very good control of the tongue, and excellent coloratura, which I encouraged,” said James. “He had a great deal of poetry, was very quick with languages and had a natural talent for comedy. He had a great ear and was a great mimic. Once I got a call from one of my Japanese students, and only two minutes into the conversation did I realize it was Richard.”

Listening to Margison toss off high Cs, it comes as a surprise to learn that he had been singing as a baritone before working with James. “High notes at that point scared me,” confessed Margison. “I decided I was a tenor a few years after Selena did.”

“We worked every day to develop a different kind of vocal technique and build up the stamina for sustaining my voice through a three or four-hour opera. I think I learned more about singing high Cs by discovering the bottom of my voice and creating a line that goes from the bottom up to the top. Early on, Selena gave me a sense of singing on the diaphragm, not as a thing to push, but to ride on a column of air on the diaphragm, using the extremities. Instead of singing shallowly from the chest, we use more of the body—the lower part of the body—and focus on expanding the back. It’s a great source of help in terms of singing the high notes.”

How long did it take him to master his voice? “Over a period of eight to ten years it came into being. It’s an ongoing lesson. You never have your perfect performance. As with any other singer, there is a passaggio. You learn how to negotiate that through trial and error. You can get advice from teachers, but you’re ultimately the one who has to achieve that—more by trial and error and by what works for you as an individual.”

After the three-year program at the Conservatory, Margison toured Western Canada with Léopold Simoneau and Pierrette Alarie’s chamber company, Canada Opera Piccola, sang in the chorus, and didcomprimario roles at the Edmonton Opera. Over a three-and-a-half-year period, Margison figures he must have done close to 2,000 school shows!

“It was quite a pace, but by the same token it provided a great bridge from learning institution to professional stage. It is very difficult for people to give you credibility and hire you if you haven’t had the experience. It was a time of discovery, learning to pace yourself. There is nothing terribly wrong with singing every day if you are careful about what you do. You learn about your technique through such an experience because you have to go back mentally to what your teacher told you. Then something starts to make sense that perhaps didn’t in the studio.”

Singing at the Met

“I always aspired to sing at the Met, but it was in 1985, while doing my first professional role as Lensky in Eugene Onegin Vancouver, that I realized I could sing major roles in Canada. Going to lirico-spinto was another step. Many people pigeonhole you in Mozart, and it’s not necessarily the right way to go. You have to have a specific voice for singing Mozart. For many young singers, if you have a heavier lyric voice to begin with, it’s difficult to do some of these roles and it isn’t until you achieve a progression to some of the heavier lyric things that you find where your voice feels comfortable.”

Margison’s big break came when he successfully auditioned for the English National Opera in 1988. “I hated auditions. Because of the great reviews for the wonderful production of Verdi’s Ballo in Maschera in London in 1989, I started getting offers around the world to do the Italian repertoire and I never had to do another audition.” Since then, Margison has taken on most of the Verdi roles and some of the Puccini, and these have taken him to major opera houses in New York, San Francisco, and Vienna. La Scala is currently in negotiation. “Otello is one of my last Verdi roles, and I will do that for the first time in 2003 in Australia.”

Crossing over to the German repertoire is something Margison has been talking about in the last three or four years. He has already sung Bacchus in Richard Strauss’s Ariadne auf Naxos and Florestan in Beethoven’sFidelio. “James Levine thinks that I should be doing more of the German rep. It’s a natural step. There are some roles in the Wagner repertoire that I believe are similar to the Verdi that I’m doing. I would certainly think Meistersinger and Lohengrin would be ideal. The music itself is magnificent, and it would be wonderful to try it at some point. There comes a time where you could make these progressions and not give up everything you’re doing in the Italian repertoire. I would approach it from a Verdian vocal style. When Wagner was in Bologna, he actually said, after hearing the Italians, that this was what he wanted for his music. All too often, it is more shouted. I don’t feel it has to be.”

There are not many tenors who have made this switch, and Margison has looked to Placido Domingo as a role model who incidentally conducted two of Margison’s first performances at the Met. Jussi Bjoerling, who died at fifty before a possible performance of Lohengrin could take place, is Margison’s favourite tenor. Other favourites include Di Stefano, Gigli, Caruso, and Lanza. Indeed, two years ago, Margison recorded the soundtrack to the Mario Lanza film, which has yet to be shot. The disc was released only in Australia. Margison lists Jon Vickers, Edward Johnson, and Louis Quilico as Canadian role models, and he is well aware of the fact that as one of Canada’s three tenors (the others being Ben Heppner and Michael Schade) he is also a role model. Proud to be a Canadian and a family man, Margison shares his home in Toronto with his wife, opera director Valerie Kuinka, and his nine-year-old daughter Lauren. Margison has also gone on record in support of the new COC Opera House to help give Canadians the chance to sing at home.

Another of Margison’s recent projects is to lose weight. Since last year he has followed a Weight Watchers’ program and worked out. “Over a three-year period, I built up to 270 pounds through inactivity, eating after a show, and sleeping on it. I’m now down by 23 pounds and I have another 25 or 30 to go,” said the 250-pound tenor who is just under six feet tall. Is he worried about the effect of weight loss on his voice? “It’s completely dependent on how quickly you lose weight. Certainly if you lose 50 pounds in the space of one or two months, you’re going to be completely without energy. If you keep the weight loss to two or three pounds maximum per week, it shouldn’t affect your voice. That way your body moves gradually into a different weight.”

Weight in opera singers has been a hot topic lately, Margison says. “You don’t always want to be labelled the big person in the cast. Singers are trying to shed pounds—and I think not just for directors.” Margison has rather definite views on the trend to cast slim singers. “There is a bit of momentum in that, but not in the big houses. You see it more in the regional houses. You have to remember that this is opera and that the voice is important. The vocal brilliance of the evening shouldn’t be sacrificed for what people look like.”

While Margison spends 95% of his time in opera, he looks forward to concerts and recitals. The February 28 recital at the André Turp Society with accompanist Michael McMahon will feature songs by Duparc, Strauss, Tosti, as well as a healthy helping of operatic arias.

“Opera has a valid place in recitals,” says Margison. “I think that it would help bring the recital series back.” Indeed, Jussi Bjoerling, Margison’s idol, toured North America with such programs. For someone who seems to be constantly evolving, the expected encore, “Nessun dorma,” is entirely appropriate.

Margison at the Met

Since his Metropolitan Opera debut as Pinkerton in Puccini’s Madama Butterfly in 1995, Canadian tenor Richard Margison has become almost a permanent member of the company, appearing in as many as three Met productions annually. His usual roles include Pinkerton, Calaf, Manrico, Radames, Faust, and Don José. This season he treads the boards as Pollione (Norma) and Don Carlo (Don Carlo).

Margison’s ringing, sturdy voice easily fills the 4000-seat Met. His instrument is well suited to the Italian and French dramatic-lyric roles he espouses. He can float a long line and has good stamina (he deprecatingly calls himself “leather lungs”). His diction and projection leave nothing to be desired. Though he is stout, his acting is simple and commanding. And he can handle a sword, an essential skill for Verdi tenors.

Margison is valued by opera management and audiences alike because he’s a thorough professional. He doesn’t fight with colleagues or make scenes. I’ve never heard of him cancelling. When Margison is on the bill, you know he’ll be there to deliver the goods.

Margison may not be as famous as Pavarotti or Domingo, but he already sings more evenings at the Met than they do, and he often replaces them at high- profile events. After their retirements, he’ll be in even greater demand.