You are at:Home»Classical Music»Vocal»Choral»Review: Grands Ballets’ Carmina Burana – Music Is the Star
84%
84%
Thanks to amplification – yes, the Ballet has no qualms about using microphones to enhance choristers and soloists – the musical experience was satisfying, no, rewarding in normally dungeonous Wilfrid-Pelletier.

Twenty years ago, ballet seemed to be third place behind the OSM and the Opéra de Montréal. No longer. This season’s opening production of Carmina Burana is fast selling out for its 9 performance run at Salle Wilfrid-Pelletier’s 2552 seat configuration (the Balcon is closed off). That’s 22,968 seats versus 11,984 in Opéra de Montréal’s four performance productions (recently Tchaikovsky’s Eugene Onegin) in SWP’s 2996-seat capacity, and 6,300 in the OSM’s three performance productions at Maison symphonique. 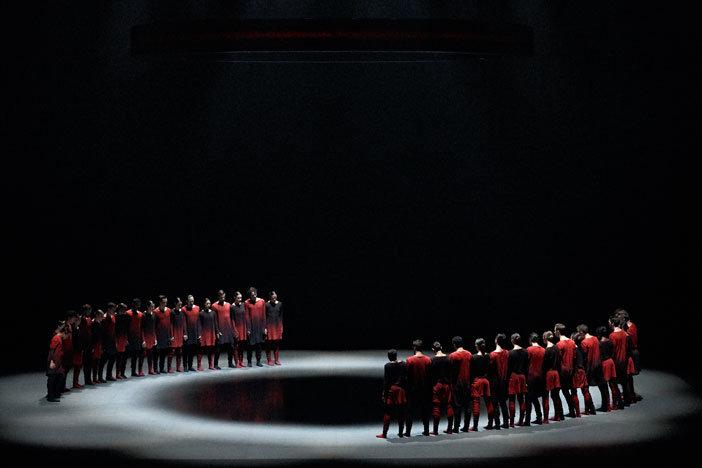 Music was the highlight in Grands Ballets’ choreography of Carl Orff’s masterpiece Carmina Burana. Thanks to amplification – yes, the Ballet has no qualms about using microphones to enhance choir and soloists – the musical experience was satisfying, no, rewarding in normally dungeonous Wilfrid-Pelletier. Music is supposed to be accompaniment in ballet, but in this production, it was the star. The startling impression from the opening “O Fortuna” sounded startling and menacing from the 40-member professional choir, who excelled throughout. Baritone Dominique Coté, replacing the published Alexandre Sylvestre as soloist for the entire run, sang convincingly except for the extremely high passages. Tenor Spencer Britten, who impressed as Monsieur Triquet in last month’s Eugene Onegin, sang the goose with full voice and ringing tone. Soprano Aline Kutan was touching in the ballad “In trutina.” The GB’s resident conductor Dina Gilbert led the orchestra with intensity. 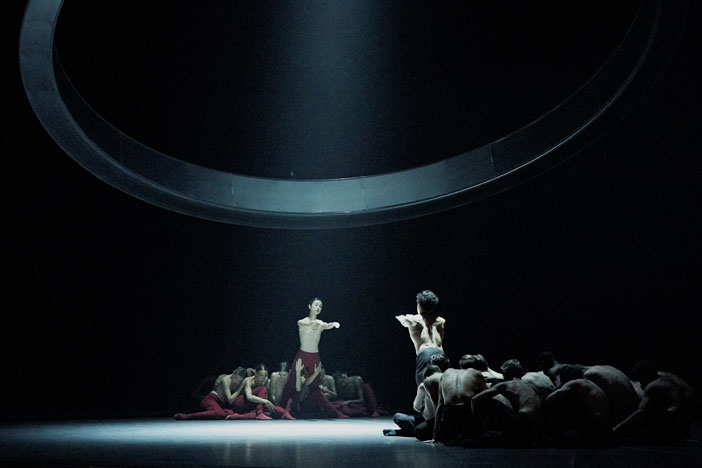 Oh, the visual eye candy choreographed by Edward Clug was necessarily interesting. A large circular ring hung over the bare stage. Is that supposed to represent the wheel of fortune or a wedding band? Midway, the ring tilted and towards the end lowered to be a circular bench. The dancers were costumed in red and black according to gender: males with red tops and black bottoms and women with black tops and red bottoms. Midway, the ensemble went topless and the show ended in skin colour undies to represent rawness of the piece. 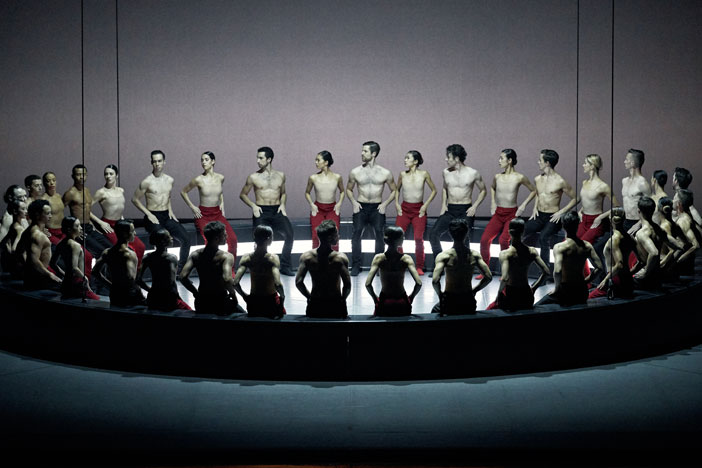 Before the intermission, we saw and heard the performance of Pergolesi’s Stabat Mater which we saw two years ago at Theatre Maisonneuve. Clug’s choreography seemed less fresh the second time around. However, the music from Gilbert-led orchestra was enjoyable, and the soloists soprano Kimy McLaren and mezzo Maude Brunet were impeccable.

Random thought: Whenever the OSM programs Carmina Burana, they would only schedule three performances. If they take a page from GB and add some dancing and they may be able to double their run.

The programme book announced the retirement of philanthropist Constance Pathy from the presidency and membership of the Grands Ballets’ board effective on October 22, a position she had held for 30 years. Under her stewardship, the GB has seen a resurgence and renaissance, and a move to the new Wilder Building. She will be a hard act to follow.

The company continues its choreography to music masterpieces with their program Danser Beethoven set to the composer’s Fifth and Seventh Symphonies, to celebrate Beethoven’s 250th birthday.