You are at:Home»Arts Industry»Maurice Forget: In Service of the Arts
avril 2010 April 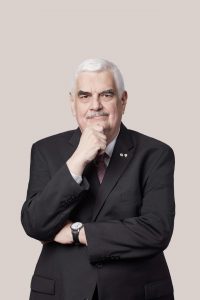 Originally published on April 1, 2010.
Update: Maurice Forget passed away on May 3, 2018 at age 71. In recent years, Forget was a member of La Scena Musicale’s Advisory Committee. Our condolences goes to Forget’s family and friends. The service will be held on Wednesday, May 16 at 2 p.m. at the Sacré-Coeur-de-Jésus church located at 1471 Ontario East, Montreal. Read the obituary.

“If I couldn’t surround myself with the arts, I would be missing life itself; I couldn’t imagine living without reading, music and the visual arts,” said lawyer Maurice Forget, winner of the 2009 Montreal Arts Council—Montreal Board of Trade’s Prix-Arts Affaires de Montréal Arts/Business Personality of the Year. The award recognized the over 30 years of active involvement by the partner of Fasken Martineau in many of Montreal’s arts organizations, about 25 of which wrote glowing support letters.

It may come as a surprise to those who know Forget as a fundraiser extraordinaire that he attributes breaking out of his youthful shyness to practicing law. “Being surrounded by very intelligent people, you realize that you are just as smart as they are, and there is no reason to be impressed or afraid,” the former chair of the Montreal Arts Council explained. As a lawyer, Forget had to persuade, reason, gather and remember facts to synthesize into arguments.

What is his simple approach to selling fundraising tickets? “You don’t send out letters blindly, you call people. You keep after them until they take two tickets. If they take one, you say ‘don’t you have any friends,’ and then they take two. It’s very time consuming and you have to really believe in what you’re doing in order to give the time,” he said, adding jokingly, “…and I have a very large Rolodex.”

Maurice Forget comes from a renowned Quebec family—Domaine Forget is named after his granduncle Sir Rodolphe Forget, who owned the property in Charlevoix where the academy and festival sit. “My family were stockbrokers, quite wealthy, and then lost it all,” said Forget. “My grandfather was an opera connoisseur and the organist at the Terrebonne parish church.” Forget likes to tell how his grandfather transformed Parisian brothel songs into fugues for the church services, which the pious parishioners said made them feel closer to God. Forget’s parents were both involved in the community. His banker father, a senior VP at Royal Trust, was a director of the Montreal Symphony and Les Grands Ballets. “It seemed normal to give a portion of your time for interesting community and cultural organizations,” he said.

Young Forget took the high school to college eight-year classical course given by the priests of College de Saint-Laurent (now Cegep Saint-Laurent). Forget worked at the college’s gallery, then called “Nova et Vetera” and now transformed into the Musée des maîtres et artisans du Québec, where he “met the contemporary painters of the 60s, who showed their work alongside the collection of 18th century French wood carvings Father Lavallée had created. There was an excellent choir, and art education. I participated in recordings, two as a soprano and later as a baritone,” he said in his resonant bass voice.

After graduating from McGill in Law, Forget started an MBA, but quit after two months. “Until you become a partner in a law firm, you have to work very hard,” said Forget. “In my eighth year of practice, I was approached about joining the board of Dawson College when they were building their new premises, and within a year I was elected chairman. Everything possible happened at those meetings. I always brought my Robert’s Rules and learned them by heart.”

Forget’s first artistic board was the Centre International d’Art Contemporain, run by Claude Gosselin, who produces La Biennale, which was originally a show of 100 days of contemporary art. “I was the treasurer, and it was my introduction to fundraising and keeping a lid on expenses,” said Forget. “I learned that it was difficult. Some people whom you would not expect to be generous are incredibly so, and others from whom you expect easy money, are almost impossible. It’s not only money that is useful to organizations, but things, services, products or time. In order to put together teams of volunteers for fundraising for community work, you have to be interested in people. You cannot just use them and leave them there. You have to be genuinely interested in who they are and take suggestions and put them into practice where you can, so that everyone feels part of the team. You learn about tax-driven notions of planned giving, donating art to institutions, including the nuts and bolts of a registered charity.”

“I get adrenaline from challenges. When you get involved in an organization, you have to go all out. I limit my involvement to about five years, long enough to get to know an organization, to be useful, but not to become bored,” he said. His only exception is the board of the Douglas Hospital, on which he has served for 21 years.

What are Forget’s artistic tastes? “I listen to contemporary music but I don’t get as much enjoyment as I do from early 20th century, romantic or baroque music.” His favourite compositions are Handel’s Messiah, Beethoven’s Sixth Symphony and Adam’s Nixon in China. “In literature, I read broad scope with a marked interest in detective stories—I’m a real sucker for a good murder mystery. And I’m a big consumer of magazines like La Scena Musicale,” he said.

It’s really in the visual arts where Forget excels. “We had real oil paintings at home,” said Forget. “When I got my first apartment, I put up real art. I don’t run to meet creators. I frequent their products. Many painters are not good communicators, but they express themselves through their paintings. Although I can recognize the qualities of medieval to contemporary art, I like to surround myself with works of today. It’s less expensive to buy living artists,” he explained.

Forget’s collecting prowess is now legendary. Over the last 28 years, as a one-man committee, he has chosen ninety percent of the 400 works at Fasken Martineau, turning a small annual budget into a valuable collection. “I’ve discovered lots of new artists, including photographers Pascal Grandmaison and the Sanchez Brothers,” he said. Forget frequents galleries, artist exhibitions and auctions. He said, “I read a lot about art and artists, so I know what to buy.” How does he decide what to buy for the office and what to buy for himself? “It depends on who has the budget at the time,” he explained. Fifteen years ago, he gave his own 400-work collection to the Museum in Joliette to “start over.” His second collection of 275 works and counting, has also been promised to Joliette. “When I started collecting, the distinction between abstract and figurative works was all people talked about. Today, this distinction no longer really applies, as many painters of today are figurative and there are fewer abstract painters,” he stated. “There is new interest in landscapes. Now everyone is buying photographs. No one was interested in public arts. Now they are all over the place.”

When Forget started working at Fasken Martineau, the firm had only 15 lawyers, a far cry from the current roster of 700. “Law firms are all developing corporate citizenship programs to distinguish themselves from the other seven or eight top firms,” said Forget. “We now have a policy to encourage and reward lawyers and professionals to do things in the community. In most law offices, there are imposed quotas of 1,400 to 2,000 billable hours per annum, and there is an expectation that they will spend 10% on pro bono, free legal services, largely work on boards of healthcare and cultural organizations.” The experience is a great way to practice governance, finance, learn marketing, improve interpersonal skills and is super for networking. “Everyone is looking for challenges and fun, and helping an arts organization is fun,” said Forget. In January, Forget retired from the active practice of law and is about to start a second career in the not-for-profit sector, in part so as to maintain the fun.