The vocal training of the Canadian baritone Gino Quilico, now 64, was unconventional by any standard. For one and a half years, starting at age 20, Gino studied almost daily with his late father Louis, Canada’s greatest baritone, working only on technique and not singing any repertoire. The lesson plan followed Louis’s Nine Laws immortalized in Jerome Hine’s bestseller Great Singers on Great Singing. Today, Gino is ready to share the wisdom he gleaned from an international career singing beside Pavarotti, Domingo, Alfred Kraus and Mirella Freni, and the lessons from his father in his own Six Rules.

One might have thought that Gino’s operatic voice was acquired genetically but the chance of a father-son opera duo is slight. In the annals of the Metropolitan Opera, they were perhaps the only such duo to have sung together in the same opera (Manon in 1987). Indeed, as a teenager Gino was a pop singer enfant terrible. Louis told Gino that the Canadian Opera Company was looking for extra choristers. Being on a big stage with costumes gave Gino the bug, leading to him to ask dad for lessons.

“In my first six months of training with my father there was no sound production, just technical aspects of opening the throat. The second six months was breathing. After that came sound: one sound, two sounds and so on. After six months of sounds, we started singing the same aria, “Avant de quitter ces lieux,” over and over again. After two years of almost daily study, I was completely prepared. The body is the singer’s instrument and my whole body was tuned up.”

“My father made me make ugly sounds so I could sense the voice. He was very methodical and a taskmaster. We didn’t always see eye to eye, and I was impatient,” said Gino who admitted to one big fight during the process. They made up and after two years, Gino was easily admitted into the University of Toronto opera program in 1978 at 23 and immediately assigned the role of Sid in the school’s production of Albert Herring and the lead in Don Giovanni the following year. “My technique was so solid, I was making money on the side giving lessons to the other students,” remembered Gino.

Louis’s lessons carried Gino through his international career, and he became a keen observer, singing next to the great singers of the 1980s and 1990s. “I learnt a lot that way. How Mirella Freni used the Italian language, it’s not in the score. It’s all traditions passed down from the masters. I also learned how the great singers have different approaches. Being next to Alfredo Kraus hurt my ears. He had a philosophy of singing through a hole. You learned that standing right beside him, the sound is not pretty, but in the hall, as the sound comes out, it takes on another colour and gets rounded, it’s much softer, yet it cuts through. You also learn from bad singers. On stage, you hear a big voice, but in the hall, it doesn’t come across. Then you understand what daddy talked about singing with a twang, even though it doesn’t sound good to your own ears.”

“Domingo knows how to sing, he’s a smart singer and always calculating. When you watch Pavarotti, you can see it in his eyes, he is so focused in the mask and the voice is working. Carreras is about letting it out, and he was known to say that he rather would rather sing for 10 years like a lion than [longer]like a sheep. I was like Carreras at one point. Sometimes, I would give it a bit more, but that’s not a smart singer.

“My father thought Jussi Bjorling had the best technique, and he learned how to breathe while watching him when they sang together. My father preached religiously about breathing. You need that to allow the cords to vibrate. It was about singing on the air and a round sound. You don’t see the greats breathe; they let the air come in.”

“A lot of young singers make the mistake of sucking the air in, they have too much air, and therefore they are not light. Luciano was light as a feather. The breathing is in the diaphragm. Not in the belly. You have to create the space and let the air come in. The ribs are open, with no air, and the lungs take the air and deflate as you sing. You then keep the ribs open to get the next breath. It took me six months to master this part.” When it comes to “support,” Gino laughs that it’s like holding your urine, much like kegel exercises. 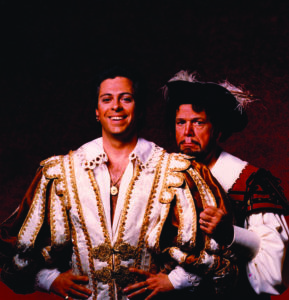 Relax the jaw. Open the throat like you are going to yawn. Focus on the space in your throat but avoid creating tension. Raise and open the moveable soft palate. Vocal cords are to emit sound as the air is released.

Breath from the mid belly section (diaphragm) through the nose and mouth. Use your hands to guide the breath and the voice outwards and forward. Avoid sucking the air in. Breath into the back section of lungs. Relax into the breath and let the air flow outward unobstructed like a sigh.

Feel Alert and awake. Lift the palate and feel cold air in the sinus cavities.

Hold a slight smile in the upper cheek bones. Make the sound in the space or what we refer as the mask.

Finding and recognizing the vocal cords. Tense cords for the right resonance. Imagine an egg shape inside your mouth. The nasal humming exercise. Start from a low note and increase by semitones while visualizing a decent.