You are at:Home»Uncategorized»Desmond Byrne on Carlisle Floyd and Susannah
juin 1997 June
Advertisement / Publicité

Montréal audiences still
remember Canadian baritone Desmond Byrne’s powerful portrayal of the
title role in Alban Berg’s Wozzeck, a co-production of
the Banff Centre for the Arts and the Nouvel Ensemble Moderne,
staged at the Monument National two years ago.

In October of 1996 Byrne went to the Kammeroper,
Vienna, to sing the role of Olin Blitch in the Austrian premiere of
Carlisle Floyd’s Susannah. Early in 1997 American bass-baritone Dean Peterson, who was
scheduled to sing Blitch at the Deutsche Oper Berlin, fell ill.
Byrne was called to Berlin to cover the role. While in the German
capital he coached the role of Olin Blitch with the opera’s
composer, Carlisle Floyd. During a stopover in Montréal in early May
before returning to Berlin Desmond Byrne talked to La Scena Musicale
about the Susannah experience. 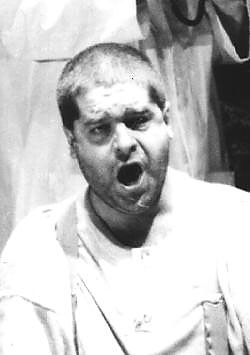 LSM: Tell us about the Vienna production.

D.B.: I accepted the role because Brigitte
Fassbaender was the director. I have always been a great admirer of
hers. She purposely didn’t try to make it American “à la Coca Cola.”
She wanted Austrian audiences to understand it. Her concept, which I
thought very effective, was to set it in a puritanical Lutheran
community. The Kammeroper is the third largest opera house in the
city, but it is a small house seating 500, specializing in chamber
opera. Floyd himself reorchestrated Susannah for a Mozart-sized orchestra, enabling us to perform the work in
a small theatre. In such an intimate setting, with the audience so
close to the stage, the greatest challenge was to be convincing as
an actor.

LSM: How was it received?

D.B. Very well. All of the 17 performances
were sold out, and I was fortunate to get good reviews. Austrians
were pleasantly surprised by how approachable a work it was.

LSM: Did the Deutsche Oper Berlin contract
arise from the Vienna performances?

D.B. Yes. When American bass-baritone Dean
Peterson got sick they called me to do the rehearsals and to cover
the run. Goetz Friedrich, director of the Deutsche Oper Berlin, had
already seen me in Vienna so he had confidence in me. As it turned
out, Mr. Peterson had a schedule conflict, so they offered me the
May 16 and 19th performances and an option on several performances
next year. The Deutsche Oper Berlin is a major opera house so it’s a
great opportunity for me.

LSM: Carlisle Floyd’s Susannah premiered in
1955 and has been given more than 200 productions and 700
performances in the United States and Europe. Last year, the
University of Montréal Opera Atelier mounted a wonderful production
of Susannah. Why is Susannah only receiving its Viennese and German
premieres now?

D.B.: I think people are paying attention to the
40th anniversary of the work, and there is a growing European
interest in operas in English, such as Stravinsky’s The Rake’s
Progress and Benjamin Britten’s operas. Europeans are
increasingly curious about American operas and Susannah is
perhaps the most remarkable of this century. Of course there are
other American operas which have entered the repertoire, such as
Floyd’s Of Mice and Men (1970), Robert Ward’s The
Crucible (1961), and Douglas Moore’s The Ballad of Baby
Doe (1956), but Susannah is uniquely approachable, highly
dramatic, and musically beautiful. At times it almost has a Broadway
feel to it, at times it’s like a Janacek opera. Susannah is a branch of the American
musical tree that is new to the European public.

In the United States Susannah has been
given at the New York City Opera, Houston, Cincinnati, Pittsburgh,
and San Diego, as well as at university-level music schools, though
interestingly, next year will be the first time the Met does it.
Susannah appeals to universities because it is short
(actually shorter than Wozzeck), there are numerous solo roles,
and the tenor lead roles – Little Bat and Sam – are not too long or
high. Two acts mean only one intermission, though in Vienna we
eliminated the intermission so that dramatically and musically the
audience had an even more intense evening, and it was over early
enough to go out and have a late dinner afterwards.

LSM: During the Berlin rehearsals you coached
with the composer. What was it like to work with Carlisle
Floyd?

D. B.: It is rather intimidating to walk
into a room and realize that the composer of a major American work
is sitting there. Floyd coached me for two hours on the role of
Blitch, and it was a bit overwhelming having the man who wrote the
work telling you what he wants. Though Mr. Floyd is over 70 years
old and somewhat frail, he is very elegant and extremely
intelligent. He is very alert to what you are doing and he has very
definite ideas about the role.

LSM: What were your feelings about the role
of Olin Blitch?

D.B.: Floyd said, “I don’t understand why this
opera is so often done at the universities. Susannah is as
difficult as Tosca or Norma, which universities rarely
attempt.” The same is true of Olin Blitch. Olin Blitch is Wagnerian,
very much a bass-baritone role. Vocally, I find it more difficult
than Wozzeck. There are huge leaps and the
orchestration is very heavy. Blitch is a terribly difficult role to
sing, although musically it sounds simple. It took me six weeks to
learn.

LSM: What were Floyd’s ideas about the
work?

D.B.: As you know, Floyd wrote both the
music and the libretto, which is why the opera is so unified, and
such a wonderful piece of theatre. He is completely devoted to
conveying the plot through the “flavour” of the very claustrophobic
ideas of the American south: the Southern Gothic esthetic, the
religious conservatism, the almost tribal values of a closed
society. Floyd’s certainty about his motivations and artistic
decisons is thrilling in itself. Nevertheless, Floyd admitted that
his ideas about the opera have changed somewhat since the fifties.
He told us, “I wrote this in 1956 when I was a young man and I
realize that I’ve learned a few things since then.” For example, he
rethought many of the metronome markings, which was a surprise.
There were also some difficult dramatic changes that I couldn’t
quite figure out, but when he explained the logic it became
perfectly clear.

Basically, the opera is a story of
intolerance based on parables taken from the biblical Apocrypha. He
took the fable of the prodigal son and put Susannah in that role.
The character of Olin Blitch represents a closed, intolerant,
hyper-religious society. Susannah is a young innocent woman who
shrugs off society’s disapproval by saying “That’s just their
opinion. They don’t really want to be mean to me.” This is a
quintessentially American attitude, as typical today as it was in
1955. Floyd’s great strength as a librettist is that he writes about
what he knows.

As Floyd explained it, his composition is a folk
opera representing post-Civil War society. Much of his music is
based on hymn tunes and folk melodies, indirectly in the Singspiel
tradition of Mozart’s Magic Flute and Weber’s Der
Freischutz. His music
creates the illusion of actually being in a conformist society and
experiencing the difficulty of individual expression. The opera is
also written in the dialect of the South, which is an essential
aspect of the colour of the piece. He told us, “I want it as
idiomatically correct as possible.”

In the first entrance of Olin Blitch “I am the
Reverend Olin Blitch”, Floyd slowed down the tempo that was being
used. “I want it stodgy, slow, almost pompous,” he said. It is like
an old battle song or a revival hymn, very Civil War-era. It
immediately conveys the straight-jacketed attitudes which Blitch
embodies. He has religion, but he is a showman and also out to make
converts. His façade is hard, but behind it you see the corruption
and the frailties that will later destroy him. The big sermon in the
Second Act, where Blitch tells a parable about a dying man who lived
a life of debauchery, is marked “half sung”. “In my opera there is
quite a bit of spoken text, Sprechstimme, and also half-sung lines. When it comes to full singing, I want
it to come from the spoken to the fully-sung text as if to say ‘Now
do you get the point?’” The composer’s idea of color is not
necessarily evident in the score, but in person he tells you how he
wants it done. That is what makes performing interesting for me.

LSM: So there were interpretive changes. Are
these changes reflected in the published score?

D.B.: The gist of Floyd’s coaching was “Yes
there are editorial changes and some musical corrections from the
first to the second printing, and there are some things I would want
to change in the score, but it is expensive to make a new edition so
it is better to leave well enough alone, as it doesn’t affect the
impact of the work.”

Desmond Byrne’s most recent appearance in
Montréal was with I Musici de Montréal in March 1997 as the baritone
solo in a performance of Landowski’s Leçons des Tenebres. He will give a recital at CAMMAC (Lake MacDonald)
on Tuesday, July 29. He next performs in Montreal in September 26th
as part of the McGill / Alumni Series.

Carlisle Floyd ‘s “Of Mice and Men ” will be
staged at Glimmerglass Opera, Cooperstown, New York, from July 26 to
August 24, 1997. Floyd will be giving a seminar on August 16
entitled “Portrait of the ‘30s: Inspiration for an Opera” at the
Fenimore House Museum, N.Y. State Historical Society, Cooperstown,
N.Y. For more information on the Glimmerglass Opera season,
telephone (607) 547-2255. Fax: (607) 547-1257. http://www.cooperstown.net/glimmerglass.