Can his style be described as Indigenous pop? “I prefer not to be labelled,” says the 27-year-old classically-trained tenor. “I’m more than an First Nation singer. I see myself as metamorphosing from pop to traditional music. A hybrid, if you like.”

Dutcher is keen to point out that his pieces were written to be as accessible as possible to a young audience. “Although each piece I composed involves archival music, I wanted them all to have a distinctly modern feel.”

A language under threat

The musician, who has lived in Toronto for four years, says that fewer than 100 people now speak the Wolastoq language. In his generation, very few are able to speak it.

“I realized the urgency of preserving it. Don’t forget, when you lose a language, you lose not just words, but also a culture, traditions and rites. If we don’t take decisive action, Wolastoq will die within the next generation. It’s important to create resources and my album is part of this.”

Yet the outlook is not so bleak. A cellphone app and a Wolastoq dictionary are now available. “Before, I had to call members of my family or visit the reserve to speak the language, but now I can use the app, which is very handy for people far away or for young people who want to practice their Wolastoq. 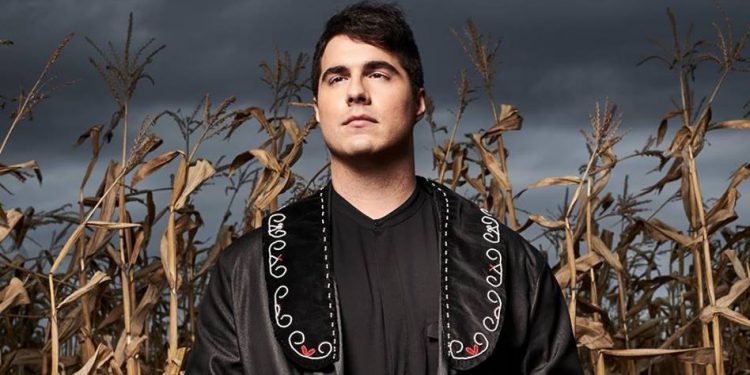 “Despite the current situation, I think people are very enthusiastic about preserving their living language. There’s a school immersion program. My niece is enrolled in it and that’s wonderful.”

Although not a teacher, Dutcher would like to act as a conduit of the Wolastoq language. “I teach from my heart and I want to show the youngsters that our language is beautiful. I was talking about it recently at a workshop on the reserve.” The reserve is near Fredericton, New Brunswick.

Wolastoqiyik Lintuwakonawa had a lengthy gestation. Four years ago, while studying music in Halifax, Dutcher went back to show his compositions to members of his community. “My mother heard them. She speaks the language, and she was very touched by my music […| It was important for me to come back with a completed project, a product to show them, a CD to play.”

Montreal to Paris via Asia

Dutcher had the privilege of presenting his compositions for a month during an Asian tour. “The Canadian embassy organized it, and participants included the chief of the First Nations and me. I was the only musician. I visited five countries, including the Philippines and Malaysia.”

Dutcher, who has already played at Pop Montréal, has a good roster of shows lined up in cities including Toronto, Montreal and Paris: “I’m playing at the Gesù on July 4. It’s a wonderful venue for a solo concert with piano and computer, which I need to play archival samples. So that will be part of the Montreal International Jazz Festival. Then in 2019 I’ll give a concert in Paris.”

Dutcher visited the Canadian Museum of History (formerly the Canadian Museum of Civilization) in Gatineau to dust off some old archives relating to the musical tradition of his people. “I spent two weeks in Gatineau listening to archives more than a century old. Most were recorded on wax, which isn’t the most reliable technology because it can crack or melt. I listened to 70 archival pieces out of a collection of 100 related to the Wolastoq tradition. Out of those I selected 11. These formed the basis of the compositions for my album.”

Maggie Paul, an elder of his nation and a song carrier, played a key role in his project. “She told me about the archives, how important it was to bring them to light,” explains Dutcher. I didn’t even know they existed. You can hear Maggie on the third track. The idea behind the project was to create links between past and present and then to show the fruits of my efforts to the museum management.”

The second track, Pomok naka Poktoinskwes, is an archive from the 1980s that Paul recovered and has been sung in the Wolastoq community ever since. “It was the only archival recording that I recognized from my childhood. It’s about a fisherman and the spirit of the water moving around him. Maggie told me she heard a symphony in the piece. So I pursued this idea by adding strings in my updated version.”

Although he loves his culture and its traditions, and enjoyed the related archival research, Dutcher points out that he doesn’t want to continue in that vein all his life. “I used that research for this album, but I have other stories to tell, regardless of the method. As for mixing and bringing together the two worlds (Aboriginal and Quebec culture), that’s something that can take a lifetime.”

A versatile musician, Dutcher plays drums, strings and piano. “I transcribed everything for the piano to get a good idea of how it would sound, and when it came to recording the album, I got professional musicians on board.” The string quartet was a tribute to his classical training, he says. For the recording, mixing and electronic effects, he called on the talents of Bufflo, a Montreal producer.

For all his shows, Dutcher insisted on a grand piano, whether playing in Ottawa, Toronto or First Nationsvillages. “In the little village where my mother grew up, Neqotkok, many children had never seen a grand piano. I decided to hire one to present my project, and the people were surprised and grateful.”

Although still at the beginning of his career, Dutcher has had the privilege of singing with the Regina Symphony Orchestra. “It’s easy with the piano, you’re only responsible for yourself. But with an orchestra, you’re interacting with about 40 musicians, so you’d better not miss your cue.” 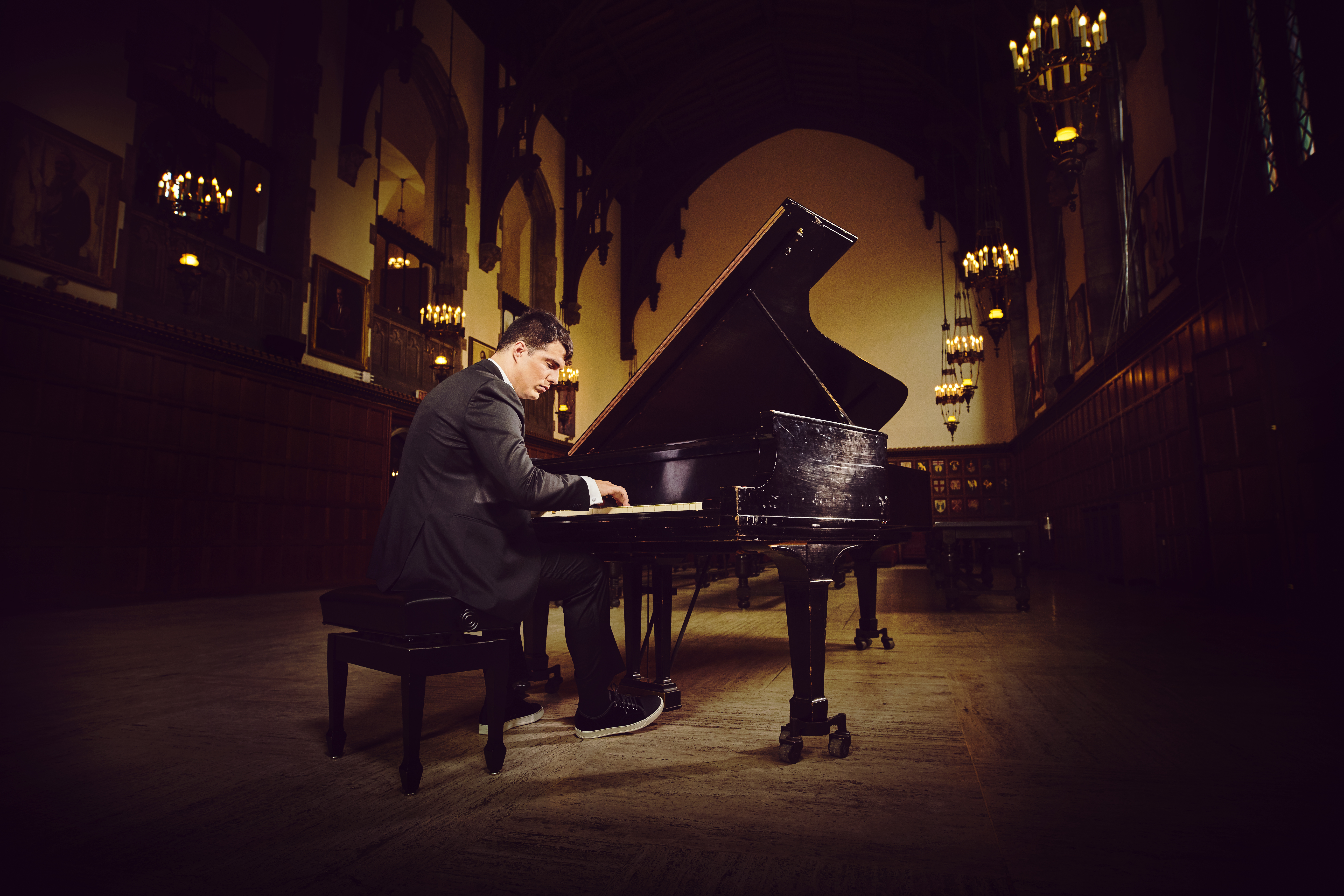 After visiting the Canadian Museum of History, Dutcher saw a potential partnership with the institution. “Nothing’s been confirmed for the moment, it’s really just embryonic, but there’s a possibility of the museum setting up a program showcasing Aboriginal artists. They could so something like what I’ve done and make it part of their creative process.”

Jeremy Dutcher’s voice has a precise vibrato. “I think I’ve had it for a long time. The timbre of my voice never sounded like my classmates’. I was able to perfect the style while I was at school.” This vibrato is a natural gift, not a technique such as the throat singing practised further north by the Inuit.

Dutcher was as careful with the look of his album as with the sound. He wanted to convey something that symbolized a way of thinking, a particular significance. He is pictured seated in front of a phonograph. In the background there is the famous image of the ethnographer Frances Denmore collecting songs from the Blackfoot chief Nina-Stako in 1916.

This photo of Denmore guided the musician as he made his album, and even haunted him: “I wanted to invert the image to reflect my own contemporary musical path – while conveying the notion of objectivity inseparable from any archival project.”

The phonograph occupies an important position on the album cover. “The way I’m positioned implies a duality between research and musical creation,” Dutcher says. “I am in charge of both composition and research.”

The album cover shows a photo by Matt Burns of a jacket created by the Wolastoq designer Stephanie Labillios. In the background is Kent Monkman’s painting Teaching the Lost. “Kent Monkman is from the First Nations. He’s Cree. Like me, he lives in Toronto. Although we hardly knew each other, I dared to ask him if he wanted to work with me. I was delighted when he said he’d love to and that he liked my work. So he took charge of the visuals.”

The word Wolastoq is also rendered as “Maliseet” or “Etchemin.” Dutcher explains how the meaning has changed: “When the Europeans landed in Canada and met my ancestors, they took ‘Maliseet’ to mean ‘those who speak oddly.’ But really, Wolastoq means ‘one who comes from along the river.’ The Wolastoqiyik are the people of the river.”

This nation lives in the valleys of the Saint Lawrence and its tributaries and has customs and a language similar to those of its neighbours the Micmac, Passamaquoddy and Pentagwet. Today, around 3,000 Maliseet live in New Brunswick.