The Secret Annex, a play by New York-Winnipeg writer and performer Alix Sobler, asks: “What if Anne Frank had survived and lived in Brooklyn?”

As Hitler looted and murdered his way through Poland, Denmark, Norway, Holland, Belgium, France, Yugoslavia, Greece, and North Africa; as the concentration camps of Auschwitz, Sobibor, and Bergen-Belsen gassed and incinerated millions of Jews, Gypsies, communists, Jehovah’s Witnesses, homosexuals, and the disabled; and as the Nazis starved, tortured, and slaughtered the people of the Netherlands, an intelligent, sensitive, and talented Dutch Jewish girl wrote down her thoughts in a red-checkered autograph book she had received as a gift from her father on her 13th birthday.

For 25 months, Anne Frank, her mother Edith, her father Otto, her sister Margot, and four family friends hid from the Nazis in a secret annex at the back of Otto’s company building in Amsterdam. Betrayed and deported to Bergen-Belsen, Anne died there from typhus when she was 15 years old. The Diary of Anne Frank survived. Her diary became one of the best-selling books of all time.

Now a play, based on that diary, asks: “What if Anne Frank had survived and lived in Brooklyn?” The Secret Annex, by New York and Winnipeg writer and performer Alix Sobler, explores art versus life, adventure versus domesticity, feminism, love, rejection, happiness, remembrance, ambition, regret, PTSD, hope, and self-discovery. With engaging language and a sober command of dramatic structure, well-wrought characters, subdued pathos, and flickering humour, Sobler plays with ideas and events in a hypothetical, conjectural, speculative manner that Anne herself would have appreciated, had she survived to become the writer she dreamed of being.

Sobler plays with ideas and events in a manner that Anne herself would have appreciated, had she survived to become the writer she dreamed of being.

“Anne Frank became the international symbol of the destruction of European Jewry,” says Sobler. “But her experience did not reflect the experience of most of the Nazi’s victims. Also, the book that most people read before the 1990s was edited and sanitized by Otto Frank, her father and the sole survivor among the eight annex inmates. The version of Anne Frank in the edited diary and play and subsequent movie in the 1950s represented her as a positive and hopeful idealist. The definitive version of the diary reveals a far more complex individual.

“I had the idea for the play in the summer of 2004. I was writing and performing in one-person shows, mostly on the Canadian Fringe circuit. After a show I was sitting in the bar with my then boyfriend (now husband) Jason. I was bemoaning that, although I was a Jewish actress fascinated by Anne Frank, I had never played her onstage. I said, ‘Maybe I should write a show about Anne Frank in her 20s. She’s survived the war, but no one would publish her book.’ We laughed it off, but Jason said, ‘Hold on to that. That’s a good idea.’

“In the 1950s, as a woman with ambition, Anne would have faced many challenges in telling the story which has become a vital thread in the fabric of our understanding of 20th-century history. Would we have even heard it? I’m not sure.

“Much is said (and should be said) about the six million Jews liquidated by the Nazis. But not much is said about the survivors. This is true of many atrocities. We think the lucky ones survived, and of course, they were lucky. But they continue to suffer. The post-traumatic stress that Anne suffers in my play, the survivor’s guilt, makes it difficult for her to move on with her life.” 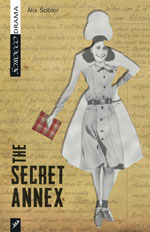 “Our limited notions of success and recognition so easily get in the way of living a fulfilled and happy life. I think this is true for many of us, but especially for people who struggle with survivor’s guilt and are charged with making their lives ‘meaningful.’

“The Secret Annex represents a lot of what I sometimes feel as a writer. Many people still see male-driven narrative as ‘universal’ and female-driven narrative as niche. There are questions of work life versus family life that still plague women today. There’s a sense that women should be happy for the strides they’ve made and just ‘get on with it.’ I do think things are changing for the better. I am optimistic, but I see all kinds of problems that still make me shake my head and think, we have a long way to go.

“For anyone who has suffered a trauma or a loss, if you don’t process it fully or get the help you need, the events can remain current for you. You can continually suffer as if those events have just happened. I think that Anne is unable to move out of the annex emotionally, because of the survivor’s guilt and the PTSD she suffers from. She cannot move on with her life, get married, start a family, or write anything else because she’s still trapped in the attic.

“There is a metatheatrical aspect to the play. While the characters are living their lives, trying to get on with things, we in the audience are continually reminded that this is not actually what happened. We know that Anne Frank did not survive the war. We know she did not move to New York, fall in love, pursue her dreams. For us, Anne will always be a teenager locked in an attic.”