Poet. Trailblazer. Canadian luminary. These descriptors apply as much to Margaret Atwood as they do to the subject of her first libretto, E. Pauline Johnson. While many will instantly recognize Atwood as the contemporary First Lady of CanLit, it is only in the last few decades that Johnson’s life and work have experienced a renaissance on the Canadian cultural scene. Pauline Johnson has become more relevant than ever in an era in which the subjects of her writing – First Nations issues, biculturalism and multiculturalism, women and sexuality, and Canadian identity – are hotly discussed. 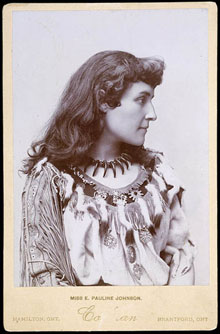 Born in 1861 to a Mohawk chief father and an English Quaker mother, Johnson made a name for herself by touring Canada and England, giving dramatic performances of her work. Capitalizing on her bicultural identity, she would give the first act of her performance as a “Mohawk princess”, costumed in a buckskin dress, wampum belt, and bear claw necklace to recite dramatic ballads of Aboriginal mythology. For the second act, she transformed into a proper English lady, delivering lyric poetry clad in a silk gown. Audiences were thrilled by her depictions of First Nations life, conveyed in the familiar style of classic English poetry.

Johnson began publishing poetry in magazines in 1883 and gave her first public reading in 1892, launching her career as a performer. Her first volume of poetry, The White Wampum, was published in 1895. In 1886, she adopted the name of her great-grandfather: Tekahionwake, which fittingly means “double wampum” or “double life” (cleverly translated by Atwood as “double-stranded”). Before her death, she published two more volumes of poetry – Canadian Born and Flint and Feather, as well as Legends of Vancouver, a collection of short fiction. By 1909, Johnson’s failing health forced her to retire to Vancouver. Despite her success, she struggled financially and physically in the last years of her life; she died a slow, painful death of breast cancer at 51. Though her books had been selling faster than they could be printed at the time of her death, with the rise of Modernist poetry her work fell out of fashion, and for a time, she was all but forgotten by Canadian editors.

Today, there is still controversy surrounding Johnson’s work. Critics can’t seem to agree on whether it was her poetry or her performances that deserve recognition. “Why not both?” asks Atwood. “She was a pioneer. She led a fascinating and brave life – and, in Canada, went where no woman writer had gone before.”

Atwood has admired Johnson since childhood, when she discovered the poet “in public school, believe it or not, in the late 1940s. ‘The Pilot of the Plains’ was in the school reader. It was a ghost story, so naturally of interest to a child of that age (me).” Her love of Johnson’s dramatic poetry persisted, and as she explains, “I put her back into the Oxford Book of Canadian Verse in English in 1983.” Atwood included “Ojistoh”, which she described as “a hair-raiser about rape and murder”, as well as the pastoral “Marshlands”. “I’d heard all this stuff about her being inferior to [Archibald] Lampman,” says Atwood, “but she is a creditable nineteenth-century poet in her own right – in her lyric work. Her dramatic work is often on par with, for example, Longfellow.”

What of the days when we two dreamed together?
Days marvellously fair,
As lightsome as a skyward floating feather
Sailing on summer air—
Summer, summer, that came drifting through
Fate’s hand to me, to you. […]

Have you no longing to re-live the dreaming,
Adrift in my canoe?
To watch my paddle blade all wet and gleaming
Cleaving the waters through?
To lie wind-blown and wave-caressed, until
Your restless pulse grows still?

What need of question, what of your replying?
Oh! well I know that you
Would toss the world away to be but lying
Again in my canoe,
In listless indolence entranced and lost,
Wave-rocked, and passion tossed. […]

Ah me! my paddle failed me in the steering
Across love’s shoreless seas;
All reckless, I had ne’er a thought of fearing
Such dreary days as these,
When through the self-same rapids we dash by,
My lone canoe and I.

First published in The White Wampum, 1895

Atwood’s reinclusion of Johnson’s work in the 1983 anthology signaled the beginning of Johnson’s reacceptance into the Canadian canon, but progress has been slow. In 1999, Atwood began the libretto about Johnson for the COC, but shelved it when the composer withdrew. The work got a second chance when Charles Barber, artistic director of City Opera Vancouver, sought a commission with a role for mezzo Judith Frost in 2006. Atwood trimmed the libretto for the chamber opera company, but though the work was due to premiere in 2010, scheduling conflicts and failed agreements meant that the premiere had to be delayed. Finally, Tobin Stokes was chosen as the composer in 2012, and Rose-Ellen Nichols cast in the title role in 2013. Pauline finally premiered in May 2014 at Vancouver’s York Theatre.

The libretto will delight Atwood and Johnson fans alike. Atwood’s trademark knack for wordsmithery is at its best in a text full of dry wit and dense with multiple layers of meaning, but she also lets Johnson speak for herself. “I used a number of [my favourite poems]in the opera itself,” says Atwood.

The opera, set in the last days of Johnson’s life as she struggles with the pain of cancer and the haze of morphine, loosely follows the trajectory of her life. In the opening scene, Grandfather Smoke sings of the afterlife as a river, evoking Chiefswood, the mansion on Grand River in which Johnson was born and grew up listening to legends recounted by her grandfather, John “Smoke” Johnson. From this foundation, the opera moves to its “true” setting: Johnson’s home in 1913, where she is delirious with pain and medication, surrounded by caregivers and well-wishers. As she frets about her identity and impending mortality, she hallucinates and reminisces about key points in her life, evoked through clever use of selections from her poetry: the mysterious lover of her youth from the erotic “The Lost Lagoon”, the creation of her stage persona with the defiant “Ojistoh”, and the adventures of her career alluded to in “The Train Dogs”. “Song”, a poem unpublished in Johnson’s lifetime, refers to another secret romance, and “The Pilot of the Plains” takes on new meaning from its origins in young Atwood’s imagination to lament the difficulties of an intercultural relationship. Throughout the opera, lines from Johnson’s last poem underscore her tenacious struggle for life — her own life on her own terms, despite the pluralities of her identity.

The opera’s other characters represent the societal standards to which she was expected to conform and the backlash for thwarting them. Her sister Eva especially expresses anxieties about identity and propriety. Three “society ladies” variously adore Johnson and gossip about her, while images projected on two screens above the stage also underscore the theme of duality. The Québec en toutes lettres literary festival hosts the first reprise and Québec premiere of Pauline, including the original cast. Contemporary ensemble Erreur de Type 27 will provide the instrumentation.

All of Johnson’s works are out of copyright and can be found freely online, including at Project Gutenberg: www.bit.ly/EPJT-LSM