While this concert marks more than one historic premiere – Tunnel Azur is the first electroacoustic piece ever to be commissioned by the OSM and to be presented at the Maison Symphonique (read LSM’s article on the new work here) – the main question on Montreal music lovers’ minds seems to be, “How does the octobass sound?” 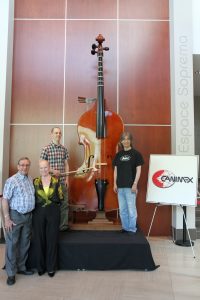 It’s a fair question given the instrument’s rarity. After the octobass’ invention by French luthier Jean-Baptiste Vuillaume circa 1850, only three were initially constructed. Of the four examples in existence today, three are part of the collections of museums, not orchestras (including the Cité de la Musique in Paris, the Musical Instrument Museum in Phoenix, and the Kunsthistorisches Museum in Vienna). Composer Hector Berlioz wrote favourably about the instrument, but other composers have mostly ignored it. The OSM is thus the only orchestra in the world to incorporate an octobass, and the OSM’s octobass is a faithful historic replica of the original octobass.

It’s easy to wonder if the acquisition of such a large, rare, and striking instrument is more of a gimmick than a valuable orchestral contribution. According to the OSM’s announcement this past June, Canimex president and music patron Roger Dubois, who procured the instrument from Europe, says that “the idea of having the only playable octobass here won us over right away.” While professional recordings featuring the octobass aren’t necessarily easy to find, some of the most popular YouTube videos for the instrument demonstrate a low, gravelly sound reminiscent of growling and somewhat flat, such as this arrangement of the Andante movement from Haydn’s “Emperor” Quartet:

However, whether it’s the warm acoustics of the Maison Symphonique or the experienced hand of OSM assistant double bassist Eric Chappell, the instrument heard at Thursday night’s concert was much warmer, smoother, and more well-integrated into the orchestra than the above Cité de la Musique video might lead you to believe. In fact, the CBC’s recent brief video recording gives prospective audiences a much better idea of what to expect.

Two of the pieces performed in fact made use of the octobass’ resonant low tones: Accelerando evokes an engine rumbling to life, while the recorded sounds of the octobass in Tunnel Azur will be familiar to anyone who has ever sat on a quiet metro platform waiting for the low rumbling that indicates an approaching train. In these contexts, the growling of the octobass’ lowest notes evoke massive pieces of machinery to great effect.

On the subject of Tunnel Azur, the first electroacoustic work to be presented at the Maison Symphonique was itself a novel experience. In the ambient twilight of the dimmed concert hall, three large speakers projected the sounds of the Montreal metro, taking the audience on a sonic subterranean journey that certainly lived up to the classification of “cinema for the ear.” Without a definite signal to the end of the piece, applause began tentatively, but grew in enthusiasm as composer Normandeau returned to the stage twice to accept acclaim. Those who are hungry for more should check out AKOUSMA, an electroacoustic music festival cofounded by Normandeau, running until October 22 at Usine C.

In my mind, however, the true test of the octobass’ virtue was how well it integrated into pieces not scored for this singular string instrument. The incontrovertible choice for an instrument on this scale seems to be a work on an equally epic scale, such as Strauss’ Ein Heldenleben, the last work on the evening’s program. Here the octobass proved its true worth, adding depth to the first and fourth movements without marring the music with any gravelly, growling texture — and contributing to a strong performance (along with an excellent solo violin from concertmaster Andrew Wan) that brought the audience to its feet.

According to the OSM, Eric Chappell will specialize in the octobass, which is welcome news to those of us who look forward to hearing it again and again in subsequent OSM concerts. In the meantime, you can catch reprises of the metro celebration concert on Saturday October 22 (8PM) and Sunday October 23 (2:30PM).

» Or catch a recording of Thursday night on Medici.tv: http://fr.medici.tv/#/kent-nagano-truls-mork-evangelista-schumann-normandeau-strauss